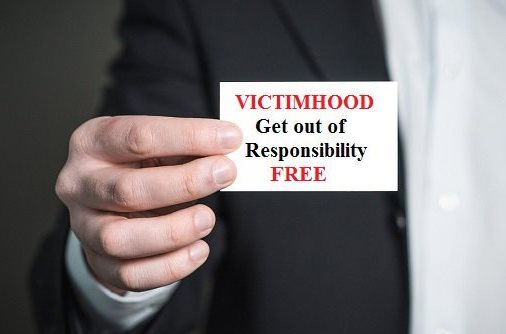 America is now a “victimhood culture.” People strive to portray themselves as victims, try to paint people they support as victims, and make every effort to be conspicuously seen sticking up for “victims.” This is extraordinarily unhealthy for everyone involved from society on down to the individual. Why does thinking of yourself and others as victims make your life worse? Well…

1) It keeps you from fixing your own problems: If you are an adult, the vast majority of your problems are your own fault and that percentage only goes up throughout your entire lifetime. Maybe in Afghanistan, where the Taliban might come over the hill and burn down your school for trying to teach little girls to read, you could say that “they” are keeping you from succeeding, but that’s not true in America. There are people all over the world trying to get here, legally and illegally, because of the great opportunities that our nation provides them. If you can’t make it in this environment, there’s probably nowhere else in the world you could make it either. Unfortunately, it’s easier for some people to wallow in victimhood than admit that truth and start on the hard work of fixing the problems they have created in their own lives.

2) Victimhood requires you to create oppressors: If you convince yourself that you’re being kept down by racism, then you have to mentally create the racists who are holding you back. Is it sexists? Then the “patriarchy” is to blame. Being gay? Homophobes! After all, if your problems are all a result of being victimized, then someone else must be victimizing you. In America, those people aren’t exactly apparent. Because of that, increasingly ridiculous explanations have to be fashioned to create those non-existent oppressors. That’s why liberals came up with “rape culture,” “structural racism,” “cultural appropriation,” and “intersectionality.” We live in a world driven by supply and demand and if there is an enormous demand for oppressors, the market will find them even if it has to create them from thin air.

3) It means defining yourself as a failure: It’s not a good thing to be a victim. Victims are people that are weak, that failed, and that have lost when it mattered. They’re powerless, helpless, and hapless. Every person reading this probably knows someone that still defines themselves by something horrible that happened to them decades ago. Is that a healthy way to go through life? Is it something likely to make you happy? Do you think the most capable people in our society mope around for hours, thinking they’re victims after a set-back, or do you think they stand up, brush themselves off and get back to work? Winners may sometimes be victimized in some way, but they don’t allow that to define them. Only losers do that. Which do you want to be?

4) Victimhood causes you to look to others to fix your problems: If you’re beaten up and robbed, you call the police. If you’re hit by a car and break your leg, you wait until someone takes you to the hospital so a doctor can fix you up. So, if you’re a victim in life, what do you do? You wait for someone to come along and fix your messed-up life for you. Maybe a politician, an activist, or the head of a government agency will take action and life will get better. Setting aside the fact that people like that care more about what they’re having for lunch today than they do about your problems, they can’t fix your life. If you have been making $11 an hour working at McDonald’s for the last 6 years, a minimum wage increase to $15 isn’t going to improve your life long-term. In fact, nobody is going to fix your life for you and if you wait for someone else to do it, you will be waiting a long time.

5) It gives you mental justification to become a bully: When am I justified in punching you in the face? After you punch me first. Of course, in America, we now have all sorts of people mentally imagining people doing the equivalent of punching them in the face, so they feel justified in behaving horribly. They feel completely okay with being a jerk because someone wore a MAGA hat. They feel like they HAVE TO lash out at everyone else because they’ve convinced themselves they’re surrounded by enemies that want to keep them down. Do you want to make yourself into an unpleasant, nasty, meanspirited person? Just convince yourself that you’re a victim who is completely justified in attacking anyone that “oppresses you” by not affirming your worldview.

Author: John Hawkins graduated from Morehead High School in Eden, North Carolina. He attended the University of North Carolina at Charlotte, where he majored in psychology. He is the author of 101 Things All Young Adults Should Know. John has been published in various newspapers like Townhall.com, The Washington Times, Human Events, The Hill, The Washington Examiner, The Huffington Post, Hot Air, PJ Media and National Review. He has interviewed Ann Coulter, Donald Rumsfeld, Newt Gingrich, Milton Friedman, Ron Paul, Ben Shapiro and Andrew Breitbart among others. You can follow him on Parler here.

Liberal Snobbishness at a Wedding