Skip to content
A Brave New World The Swamp

Is Timing of Rudy’s FBI Raid Connected to John Kerry? 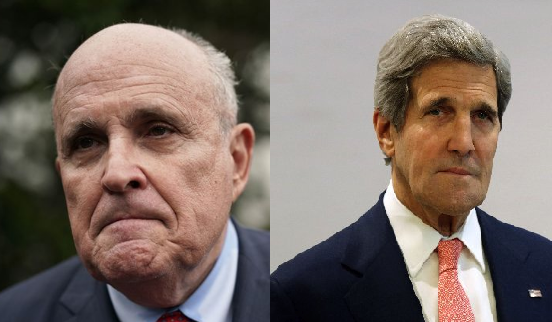 Well, it looks like the DOJ is weaponized under Biden just as it was under Obama.

They’ve been ramping up for a while now, but yesterday they hit a huge fever pitch when federal agents raided the home and office of President Trump’s lawyer Rudy Giuliani.

Federal prosecutors almost never get search warrants on lawyers, especially those of former presidents, but in Trump’s case, they’ll make an exception.

They’ve now done this to both Michael Cohen and Rudy. I’m sorry but that just seems odd to me.

The only thing missing was CNN hiding across the street in the bushes at 6:00 am like they did when the FBI conducted the raid on Roger Stone.

Federal agents executed search warrants Wednesday at the Manhattan apartment and office of Rudy Giuliani, his attorney said, advancing a criminal investigation by federal prosecutors that has been underway for more than two years.

Giuliani, who served as former President Donald Trump’s personal lawyer, has been the focus of an investigation concerning his activities in Ukraine, including whether he conducted illegal lobbying for Ukrainian officials while he pursued an investigation linked to Trump’s primary political rival, President Joe Biden, CNN has reported. Giuliani hasn’t been charged and has denied wrongdoing.

It is unusual for prosecutors to execute a search warrant on a lawyer, although Manhattan federal prosecutors have done so before, most notably in recent years against another former lawyer for Trump, Michael Cohen.

On Wednesday afternoon, an attorney for Giuliani, Robert Costello, said the warrant described an investigation into possible violation of foreign lobbying laws and that it sought communications between Giuliani and people including a former columnist for The Hill, John Solomon.

Bottom line here is that I just don’t believe in coincidence and I find it interesting that the very day after John Kerry is exposed as pulling strings behind closed doors with Iran and that just happens to mysteriously coincide with Guiliani’s warrant.

At first I thought I was just being paranoid then I see this Tweet from Emerald Robinson who said: “It’s strange that when John Kerry gets into trouble for helping Iran, Rudy Giuliani suddenly gets raided by the Feds.”

This does seem like quite a coincidence… It takes the media heat off Kerry and smacks down the guy who dragged the Presidents crackhead son Hunter Biden through the wringer.

That’s just the way things work in the Swamp.

Remember when the news broke that Cuomo had covered up the severity of the Covid deaths in New York nursing homes by under reporting the number? Suddenly the next day Lindsey Boylan makes the first sexual harassment accusation against him and everyone’s attention is drawn away from the bigger story of 15,000 dead elderly nursing home patients.

Then remember when Pelosi was busted with her hair salon during COVID…I can’t recall what “news story” suddenly came along to change the cycle and get the attention off of her, but I remember saying, “Oh, well Pelosi’s story will go away and never be heard of again…” and I was right.

Same thing with the Kerry story – only this is much worse. What he did looks like treason. There, I said it, TREASON. Yes treason my friends.

Politics in our country is a dirty, dirty business.

We foolishly thought President Trump could “drain the swamp” by himself in a few years – little did we know back then that it’s not actually a slimy, shallow swamp, it’s a bottomless ocean miles deep.