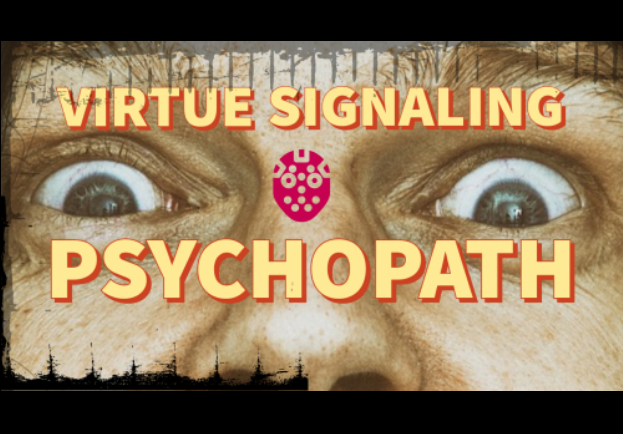 She was apparently about to be outed as a race-faker, and decided to get ahead of the news by admitting that she was “a culture leech.”

According to friends, Krug was militant and aggressive in her stances against systemic racism, going so far as to pick fights in public with other White women, and expect her Black friends to help her.

Clearly Krug thought identifying as Black allowed her to claim the moral high ground from the White devils, and lend her more expertise and street cred in her career as a Professor and author of African studies.

Rachel Dolezal, famous outted after years of pretending to be Black, also benefitted from her faked identity– she was the head of an NAACP chapter.

And who could forget Elizabeth Warren, who was listed as a minority professor at Harvard for years because she thought her high cheekbones made her a Native American. She was later hilariously trolled by Trump, who convinced her to get a DNA test, which she actually bragged about, saying it confirmed that she is at most 1/64th Native American.

This really isn’t a hard phenomenon to figure out. The more you give certain groups in society special advantages and privileges– from the moral high ground to jobs and salaries– the more this will bring the worst type of people out of the woodwork to take advantage.

In the context of two recent studies, it all makes perfect sense. Here, the science confirms what we intuitively know– that bad people take advantage of other people’s good intentions to gain power.

You’ve probably heard of “virtue signaling,” when someone tries to show how morally superior they are because of some cause they claim to care about.

For example, the Instagram influencers caught staging pictures which showed them helping to clean up a neighborhood after a riot. Or a company that tweets out support for gay rights during pride month.

They are signaling that they are virtuous, and reaping the social and material rewards of being part of the “woke” crowd.

But this new research indicates that these Social Justice Warriors might not be so well-intentioned.

The Journal of Personality and Social Psychology recently published a paper which analyzed the results of a number of studies on victimhood and “virtue signaling.”

The paper is called Signaling Virtuous Victimhood as Indicators of Dark Triad Personalities.

The “dark triad personalities” are narcissism, psychopathy, and Machiavellianism.

The research found that individuals with these three traits are more likely to signal virtuousness or victimhood.

That means psychopaths, narcissists, and shrewd opportunists often take advantage of the social climate for their own gain.

And it’s not just sympathy or social status they gain. The benefits of virtual signaling include real, tangible, gains in resources– as evidenced by the three White posers we discussed.

That’s because the US is now an environment in which it is, according to the study, “increasingly advantageous and even fashionable” to be considered a victim.

It is also used as a way to gain “moral immunity” for “deceit, intimidation, or even violence by alleged victims to achieve their goals.”

In other words, the ends justify the means. As long as you claim to have a noble intention, then it can excuse any amount of terrible behavior in the pursuit of that goal.

And that is why Black Lives Matters embeds its admittedly Marxist goals in the vehicle of racial justice.

Signaling support for disenfranchised groups is a shortcut to get ahead in today’s world.

This obviously doesn’t mean that every “woke” person is a psychopath. Surely some have the best intentions.

But this study confirms that when society gives some people special rights and privileges, bad people will always take advantage of it.

Coupled with another study which was released a couple years back, we can understand perfectly the woke threat coming out of the belly of the beast, Washington DC.

The study called Psychopathy By State found that the concentration of psychopaths in Washington DC was far higher than in any state.

“The presence of psychopaths in District of Columbia is consistent with the conjecture… that psychopaths are likely to be effective in the political sphere.”

Psychos are drawn to power. It is not just that power corrupts, it is that already corrupt people seek power. Government is the best industry to be in for someone with no morals.

The study surveyed samples from the lower 48 states and Washington D.C. to find the prevalence of personality traits which correspond to psychopathy.

Of course, D.C. came in first by far. But as the author notes, that this is not exactly a fair comparison, as it is a city being compared to entire states. The study finds that urban areas, in general, correspond to more psychopathic personality traits.

Another interesting finding is that a higher concentration of lawyers predicts higher psychopathy prevalence. Shocking, I know.

So removing D.C. can you guess which states come in the top three for concentrations of psychopaths?

The least psychopathic states are:

And it should not be surprising that the main correlation was that state with the lowest percentage of people living in urban areas also had the lowest concentration of psychopaths.

Perhaps psychopaths need to be around more victims, or constantly switch out their friends and acquaintances as they become wise to their antisocial behaviors.

It is possible that psychopaths are more easily recognized and ostracized in smaller communities and rural settings.

Areas of the United States that are measured to be most psychopathic are those in the Northeast and other similarly populated regions. The least psychopathic are predominantly rural areas. The District of Columbia is measured to be far more psychopathic than any individual state in the country, a fact that can be readily explained either by its very high population density or by the type of person who may be drawn [to] a literal seat of power (as in Murphy 2016).

Hailing originally from Massachusetts, I can attest to the highest corresponding personality trait being “Temperamental & Uninhibited.” Where did you think the term Masshole came from?

If you aren’t a psychopath when you enter the state, you soon become one from the traffic alone. And I wonder if just being in such close proximity to people makes it a necessary adaptation to care a little less about how your actions affect others.

The solution is to not give a single inch to these virtue signaling psychopaths.

Don’t engage them. Don’t fall into their traps, don’t denounce your Whiteness, or apologize for being straight, Christian, rich, privileged, or whatever. That’s a race to the bottom, and the best thing we can do is either ignore them, or relentlessly make fun of them with memes.

What you don’t want to do is go in the other direction, and become the self-fulfilling prophecy by actually becoming racist. Remember, this is a small group of people trying to make everyone else self segregate or identify with a victim group. Just keep it in mind that this narrative is being driven by elitist White liberals, some of whom will go so far as to fake being victims themselves.

The other thing you can do is self-select the group you associate with, and live around. I’ve been doing this for years, and the only time I ever see these ridiculous race baiters and woke mobsters is online.

Remember, the media will take a tiny minority opinion, present it as if it is mainstream, and try to build it into a movement. It’s still dangerous, since the minority can, and does in many cases, take over and set policy. You still have to call attention to the cult to make sure it doesn’t catch on.

But I don’t actually know any woke mobsters in real life, which is either a testament to the power of selecting the people you surround yourself with, or it means, as I suspect, that there actually aren’t that many people who think like this.

And finally, living in a more rural place, or a tight-knit suburban community– which again, you have specifically selected– can also solve a lot of these problems.

Like the study says, these people concentrate in cities, so being rural does get you out of their reach to some extent.

Author: Joe Jarvis is a human who exists. Sometimes he makes things up and writes those things down. Other times he processes information from the world, combines it with his opinion and worldview, then writes that down. But really, who can tell the difference?