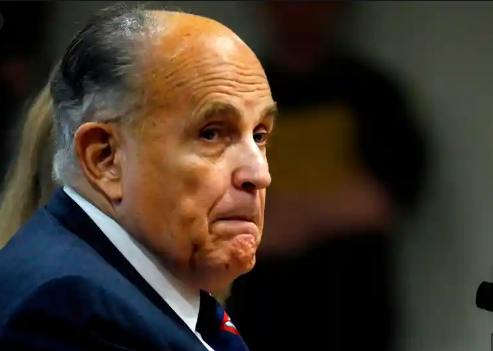 The agents executed a search warrant and seized electronic devices from both locations, one source said.

The moves were tied to an investigation into Giuliani’s dealings in Ukraine, according to reports.

A resident of Giuliani’s Upper East Side building on East 66th Street said the doorman described greeting the agents at 6 a.m. and letting them pass when they displayed a search warrant.

The raid marked an escalation in the feds’ probe of the former mayor, who is being investigated over whether he illegally lobbied former President Donald Trump on behalf of officials and oligarchs in Ukraine, according to the New York Times.

The warrant sought communications between Giuliani and other people including political columnist John Solomon, who had communicated with Giuliani about the effort, the former mayor’s lawyer told the Wall Street Journal.

Lawyer Robert Costello told the Journal that the warrant outlined an investigation into the suspected violation of overseas lobbying regulations.

Costello also called the raids “legal thuggery,” saying he’d repeatedly offered in vain to answer questions from investigators if they agreed to detail the subject of their probe.

“It’s like I’m talking to a wall,” he told the Journal.

Investigators in the Justice Department had tried for months to secure the search warrant, according to the Times.

Prior to President Biden taking office, Trump appointees at the DOJ had tried to block approval of the warrant, the Times said.

A spokesperson for the US Attorney’s Office for the Southern District of New York declined to comment.