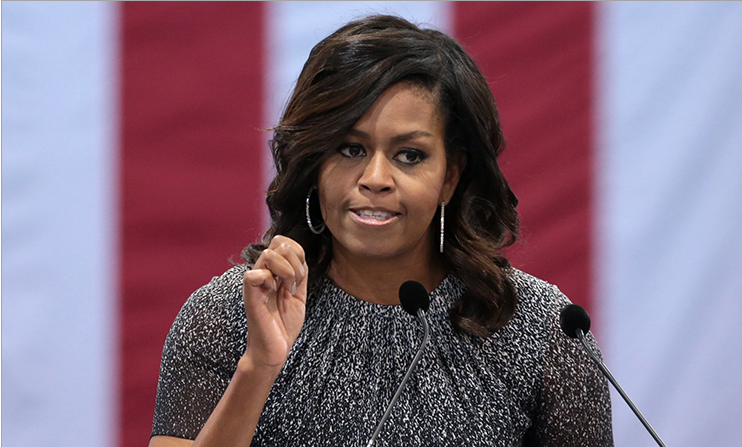 Recently The Michelle Obama Podcast revealed shocking information that should concern all white people. “When I’ve been completely incognito during the eight years in the White House, walking the dogs on the canal,” Obama explained, “people will come up and pet my dogs, but will not look me in the eye. They don’t know it’s me.” She further stated: “That is so telling of how white America views people who are not like them, like we don’t exist. And when we do exist, we exist as a threat. And that’s exhausting.”

Even allowing for Michelle’s status as a privileged female victim of color, in the same category as Meghan Markle and Oprah, it may be a good idea to take her words seriously. Her complaint about not existing for most Americans even as a first lady may be true, albeit not for the reasons she assumes.

It certainly was not the case that Americans looked down on Michelle as first lady because of her race, since she has repeatedly been voted the most admired woman in the world. This honor has been bestowed upon her while she has been ranting nonstop about living in a white racist country, all from her $11.75 million pleasure dome in Martha’s Vineyard.

Americans don’t seem to mind being berated as evil racists, whether at Critical Race Theory indoctrination sessions in universities, in the workplace, or from non-white media stars. Thus it’s not that apparently masochistic Americans are punishing Michelle with neglect for saying bad things about whites. Rather, she is being treated as if she doesn’t exist in another, more existentially critical sense.

Michelle does not exist in the same significant way as do Jeff Zucker, Jeff Bezos, Mark Zuckerberg, Tom Dorsey, or Bill Gates. She cannot control the outcome of presidential elections by shutting down the opposition in favor of those leftist candidates whom she favors. She cannot reconstruct reality for tens of millions to fit a political agenda. Instead, what Michelle says only gains approval because of how the media presents her image and her views.

I cannot fully explain why our corporate and media elites wish to radicalize this country socially and culturally, or why they get their kicks by degrading white, heterosexual Christians. But that is the way things are. Those whom the powerful shed their grace upon are expected to support leftist cultural and political agendas. If they don’t, these individuals, no matter how talented they may be, will be pushed out of public life and badly defamed.

If Michelle or her hubby suddenly started sounding like Clarence Thomas on moral and constitutional questions, they would be cancelled in a nanosecond. Enjoying the continued good will of the “woke” media and corporate giants demands total compliance with their politics, something we may assume that Michelle, Barack, and Meghan understand as well as do Don Lemon, Maxine Waters, and Al Sharpton.

The reason such figures take the same positions white leftist elites expect of them may be that at some level they comprehend their accessory role. They are not being showered with fame and fortune to oppose abortion and gay unions or to complain about racialized politics. They are being paid to be an echo chamber for those who enhance their fame and fortune.

This week I was struck by the patently counterfactual response of former president Obama to the killings of eight massage parlor workers in Atlanta. Despite attempts by President Joe Biden to racialize this incident, there is no evidence that white prejudice against Asians was a factor here, yet Obama immediately attacked racism and misogyny as the culprits. He also ignored the fact that whites commit racially motivated crimes against Asians at a much lower rate than blacks do. Furthermore, Obama’s beloved Black Lives Matter targeted Asian shop owners during the “peaceful protests” that the Obamas and their friend Vice President Kamala Harris were drooling over last summer.

But Obama’s well-rehearsed rant is exactly what America’s woke rulers expect from a black hero. It is not because he says sensible things that I saw Obama’s picture nestled against one of George Washington on the cover of a book about great presidents at our local supermarket. Obama is where he is because he indulges the editorial boards of The New York Times and Wapo and provides electronic media giants with the kind of outbursts they enjoy hearing.

Although this is a counterfactual that could never occur, probably not even in an alternate universe, I would be interested in seeing what would happen if Michelle or Barack responded to the killings in Atlanta by telling us that this disaster had nothing to do with race. What if, after the Boulder killings, they explained that we have enough laws to protect us against gun violence, but that it would be nice to have them enforced in Democratic-run cities? Of course, this could never happen, unless the ruling class changed.

Originally Published in The Chronicles

Paul Gottfried is editor in chief of Chronicles: A Magazine of American Culture. He is also the Raffensperger Professor of Humanities Emeritus at Elizabethtown College, where he taught for 25 years, a Guggenheim recipient, and a Yale Ph.D. He is the author of 13 books, most recently Fascism: Career of a Concept and Revisions and Dissents.