The Media is Acting as the Hitman for the Federal Mafia 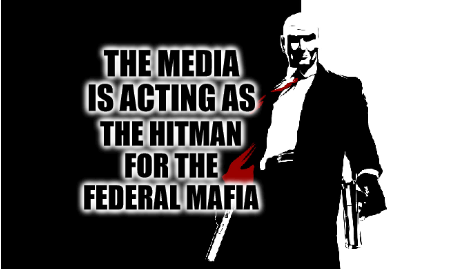 The Merriam-Webster dictionary defines a hitman as ‘a professional assassin who works for a crime syndicate.’ The term hitman, while synonymous with ‘contract killer’, is often used in relation to organized crime and most of the time a hitman is a member of an crime family and not paid on a ‘contract’ basis, while assassins are killers-for-hire, who handle contracts in a freelance capacity. Either way you define the word, a hitman does the dirty work so as to keep his associates hands clean of the crime.

As I was growing up I saw many examples of hitmen depicted in movies like The Mechanic, The Day of the Jackal and Prizzi’s Honor etc. Most of the stories were about a Mafia type boss who orders a ‘hit’, the implied action was then to be taken by a ‘button man’ or ‘soldier’ of the family. But then there were the story-lines revolving around the head of a major corporation or a politician who puts out a contract on someone and it becomes a free-for-all ‘whoever kills the target gets the money’ deal.

Also when I was young, I began to see some parallels between the classic ‘hitman’ movie genre and the relationship between politics and television and newspaper reporters. It was almost as if the media was employed to advance the careers of certain politicians and political movements. But wait, weren’t journalists supposed to be non biased reporters of straight news and opinions left to the editorial writers? I realized I was wrong.

I quickly witnessed patterns from the electronic media and newspapers that disturbed me to to no end. I saw the direction of reporting, I didn’t like what I saw. I am blessed with an ability of quickly figuring out patterns and seeing how things piece together. These talents showed me I sure as hell could never trust the media without doing my own research. You have to do your homework.

The supposedly, trustworthy news reporting organizations that should be telling the truth and ethically reporting just the facts never strive for that, only a select few even try. The media pushes sensationalism for an extra dollar or two. Newspapers stopped reporting on substantive issue and information 50 years ago. Reporters take an oath to be ethical but only search for the path to the quickest dollar. Much of it started by their parent companies.

If one news organization decides they want to abide by the old standard and if that organization is making headway by seeing viewership or readership grow, they are shut down. This was tried for years against Fox News when it first debuted. The real reason these types of news agencies are pushed into oblivion is so that the Main Stream Media can maintain control over the narrative and therefor control the people.

News organizations have been spreading race-baiting propaganda for decades now. With each and every year making people feel worse about things and themselves. If life in this country is so God awful for everyone other than white, Anglo Saxon, protestants of European descent, why the hell are so many people of other cultures, and races immigrating here at record numbers? The unfortunate truth is the majority of the people never seem to ask themselves these questions. They also do not reflect upon what this country really does offer the world, mostly because the “Trusted” news organizations just report a negative view of America.

So why are news organizations slinging such outrageous garbage and politicians on both sides of the fence going along with it? One word, POWER. When the news organizations and politicians are in cahoots with each other to gain and keep power, everything works perfectly for them. The media spreads the hate, implying everyone and everything is racist, and the Democrat politicians use the propaganda and lies spread by the media to demonize their opposition and their supporters. Then these same Democrat politicians use this division to enact laws intended to encroach on the liberty of everyone, all for the “good of the nation.” Throughout human history we can see this tactic employed to control the populous through division and alienation. The rise of communism in China and Russia and Nazism in Germany was fueled by this same tactic. And right here today in 21st Century America, rather than uplifting the the people through the pursuit of life, liberty and happiness, unscrupulous politicians, through their lust for power encourage the people do many evil and disgusting things to their own neighbors. Watch the unfettered riots in Portland for an example of this. And the news organizations gladly sew the seeds of division for their political allies in order to share in the power the division bestows.

Now you can see why the power hungry news agencies want OAN, Newsmax, Epoch Times, and many other honest news organizations removed from the media landscape. They want to discredit them so people wont view them. They want to wipe them out of existence because they are a threat to their power. Soon there’s going to be a massive hit piece on OAN by the New York Times. This piece will be written by a so called, “Award Winning Journalist”, as if that is some reason to trust her. Awards for anything other than sports mean absolutely nothing in the real world, and awards in media are nothing but a popularity contest at best and purely politics at worst. Why anyone should be trusted to tell the truth about anything based on how many plaques they have hanging on the wall of their office is beyond me. The real reason for this hit piece in the New York Times is to discredit OAN and demonize their viewers. Once they’ve successfully challenged OAN’s credibility, pressure can be placed on the platforms that carry the network into your home (cable and satellite servers) to drop them from their line-up.

What you have here are so called, “news organizations” doing the dirty work for their partners in Washington DC. It would be hard for the government to shut down these honest news reporters through legislation because of that pesky first amendment thing. However, by using private industries such as CNN, MSNBC or the New York Times to act on their behalf, congress and the White House can keep their hands clean. But in the end the result is the same, the suppression of speech from Nancy Pelosi’s ideological enemies. In effect the Main Stream Media is acting as the hitman for the Federal Mafia the way Luca Brasi did for Don Corleone. Before he slept with the fishes, Luca Brasi would do unspeakable things for the Godfather in order to expand the Family’s power and wealth. That’s exactly what the New York Times does for their partners in crime in congress and the Deep State.

News organizations have a responsibility just like any other business or person who provides information to their readers. I feel I have a responsibility to tell you the truth. I have a responsibility to state whether what I write is an opinion or fact. This is never done by these Main Stream News Organizations and thus maybe they need to be audited for truth and whether they pushed the narratives of their government crime boss’s that caused sedition, insurrection, and other serious crimes for political gain, or were they simply reporting their opinions which they just accidentally got wrong. If you think about what is reported and how it is reported then you will see just how many people and organizations need to be audited.

Watch this video it will show you exactly what I mean. Listen to the question from the New York Times reporter and how she asks them.

HHHMM The FOURTH Booster Does Not Work? REALLY