The Cancel Culture Mob Got Gina Carano and Is Eyeing Fox News. Here’s Why It’s Wrong. 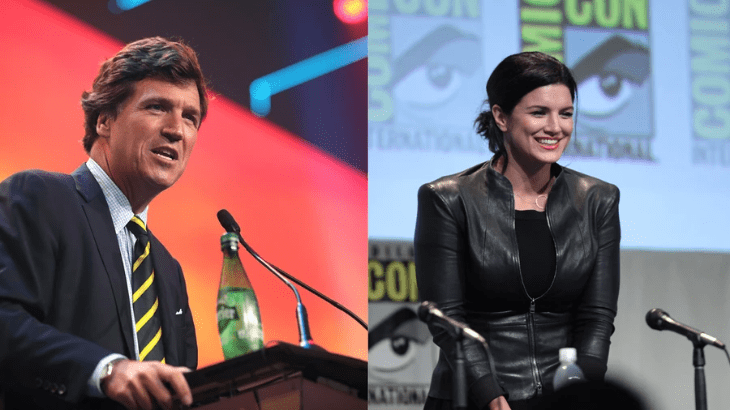 As the nation continues to grapple with the fallout from the January 6 attack on the US Capitol, prominent members of the media are calling for the erasure of right-wing media outlets like Fox News, One America News Network (OANN), and Newsmax, which they say contributed to the riots.

Max Boot, a columnist for the Washington Post, wrote a piece titled, “Sadly, Fox News Can’t Be Impeached” in which he called these television networks “collaborators” in inciting a violent insurrection. Boot went on to ask, “Where is the accountability for right-wing propagandists like [Tucker Carlson] who recklessly splashed around the lighter fluid that ignited on Jan. 6?” and suggested pressuring cable giants to suspend their platforms if they do not “clean up their acts.”

Boot is not alone in his thinking. Journalists from the New York Times (which frequently cancels its own writers), MSNBC, and CNN all got in on the action.

On the program “Morning Joe,” Anand Giridharadas of MSNBC questioned whether Fox News “is a thing that should exist in America,” stating:

It is a brain-mashing machine for half of this country and we see that a large number of brains are already being mashed. We see after the terrorist insurrection that 12% of Americans supported the terrorist attack after it happened. I’m not just worried about a few thousand people on the Hill; I’m worried about several million people who are now down with terrorism as a means of political conduct…Is that not a violation of the basic ethics and norms of a civil society, if not of the law?

Nicholas Kristof from the Times wrote, “We must clear an ecosystem of mass delusion spread by Fox News and many Republicans” in a recent opinion piece.

And Oliver Darcy from CNN again pointed fingers at AT&T, Verizon, Comcast, Charter, and Dish—which host channels like Fox News—and said, “it is time TV carriers face questions for lending their platforms to dishonest companies that profit off of disinformation and conspiracy theories.”

Not all that long ago, one would have expected to see journalists rushing to defend the values of free speech and a free press—even and especially for those with whom they disagreed on political matters. Instead, we now see journalists essentially clamoring for an end to their own profession, and it must be added, working to silence their competition.

Glenn Greenwald and Matt Taibbi are among the few journalists on the left speaking out against the movement.

This mentality is part of a larger zeitgeist the country finds itself in, and it is one that has been snowballing for several years.

Just this week, The Mandalorian star Gina Carano was fired for a social media post condemning cancel culture and political divisiveness. Carano pointed out that the Holocaust began with hatred of one’s neighbor and made a comparison to the current climate in America.

A sizable portion of the population sees no difference in a person who makes a statement like this and a person who actively seeks to harm others. The mob roams seeking to devour anyone outside its group-think parameters. The offenses are subjective—creating an environment of distrust among Americans, fear of one’s community, and a desire for revenge among many.

Fake news, cancel culture, and de-platforming have all taken up considerable space in the national conversation, and yet it seems we are no closer to workable solutions to the problems underlying these events.

And to be sure, some of these problems do not present easy answers. Fake news is a concern. Despite being at least a decade into the “age of information,” people seem to be becoming less educated and informed. Conspiracy theories are seemingly everywhere, disingenuous grifters rile gullible audiences up for likes and notoriety, and the majority of Americans spend their days in an echo chamber with few voices to correct disinformation. The market for moderate voices has all but evaporated, and this contributes to both sides’ progression to the fringe.

The responses to these phenomena are complicated. Cancel culture and de-platforming are free market responses, after all.

Businesses have every right to part ways with those who might harm their bottom line or who violate their core beliefs, just as consumers have the right to vote with their dollar and pressure companies to change their ways if they want their business. But there’s no question that these efforts have disproportionately been aimed at conservatives and libertarians.

And many people have been swept up in the current unjustly, losing their jobs or platforms for minor or ambiguous “offenses.” For example, a top Boeing executive lost his job for an article he wrote in 1987 expressing the opinion that women should not be fighter pilots. A teacher was fired for inadvertently using the wrong pronoun for a transgender student. A man was fired for participating in a Chick-fil-A protest.

In recent years the criminal justice reform movement has found great success in pushing for society to see people as more than the worst thing they’ve ever done and arguing for pathways to redemption. But at the same time, many of the supporters of that work are seeking to punish or remove from society those who have done things they merely dislike or disagree with.

But while people quibble over these actions and their legal and moral standing, what seems to be escaping most is that these measures are not working. In fact, they’re backfiring.

In 2020, engagements with websites that provide “unreliable news” more than doubled. A new survey found that conspiracy theories are thriving. And worst of all, extremist groups continue to grow and organize, presenting a mounting threat noted by the FBI and other government agencies.

French philosopher Michel de Montaigne once said, “To forbid us anything is to make us have a mind for it.”

I think we have all witnessed this in effect. Warning labels placed on CDs in the 1990s became a badge of honor as the indication of edgy content drove sales of albums. After being effectively cancelled by HBO last year, Gone With the Wind soared to the top of the charts on Amazon as people rushed to see what all the fuss was about. And while OANN and Newsmax were condemned by the left for spreading misinformation around the election, their viewership rates exploded.

Just because a solution is a free market response does not make it the right response, and in this instance cancel culture is compounding many of the root problems it seeks to eliminate.

Those falling for conspiracy theories and fake news are often people on the margins of our society. They feel the system is rigged against them and can’t pinpoint why. Those joining extremist groups or posting incendiary content are often people who are isolated and hurting. They feel powerless, and they want to be heard and find belonging.

These facts don’t excuse their behavior, but they do explain it. And if we want to stop these actions we must begin there.

As some in society seek to silence those with whom they disagree, they deepen their isolation and harm their economic opportunities. This frequently only further convinces them of their belief that there is a plot against them. If these aforementioned journalists are truly worried about the propensity for violence among these fringe populations, continuing to cancel and erase people is the precise recipe for it.

Just because a solution is a free market response does not make it the right response.

De-platforming these networks will not eliminate conspiracy theories or fake news, it will light a fire under them. The American novelist George R. R. Martin, author of the series of epic fantasy novels that inspired the critically acclaimed HBO series Game of Thrones, observed the problem with simply silencing people.

Instead, we must fight disinformation with correct information. That means elevating credible news sources (by elevating I also mean subscribing), having one-on-one conversations with empathy, and offering better explanations and solutions for the problems those caught up in these movements focus on. These aren’t big government solutions, they aren’t even collective solutions for society; they’re the granular, everyday work of individuals needed to fix our representative democracy.

In a free and open society, people are going to say and believe some crazy things. That shouldn’t scare us. Rather, we should want these assertions to be brought to the public square where they can be confronted and their absurdity put on display for all to see.

I happen to agree that some of these networks have broadcast crazy things in recent months, as have outlets like CNN and MSNBC (need I remind you of their Russiagate conspiracy?). Now let’s work to prove that to their viewers.

WATCH: Social Media is Censoring You. We Have the Receipts.

HHHMM The FOURTH Booster Does Not Work? REALLY

Who America Is Watching Explains the Left’s Fears and Desperation