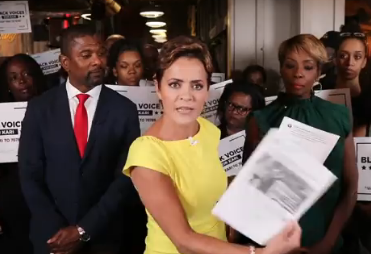 The GOP is advised to watch and take notes while Kari Lake demonstrates how you deal with the Democrats and their lap dog media. Watch her reaction when a reporter accused her of being an “election denier”:

If we play this game by leftist establishment rules, Democrats get to denounce and deny every single election they have lost since Bush vs Gore. Need proof? Just watch 10 minutes of Democrat insurrectionists denying election results:

But you see, the rules for Democrats are different than the rules for Republicans. If a Republican raises questions about the obvious shenanigans of the 2020 elections we’re told we must lower our heads in shame for being an “election denying insurrectionist’s” while Democrats plan even more hanky–panky for 2022. But as Kari Lake shows us, we do not have to play by their rules, we can punch them right back.

George W. Bush set a terrible trend for Republicans not fighting back against the lying media. I remember getting so pissed off when he was unfairly attacked all the time. I wasn’t pissed off at those attacking him, I was angry at Bush for not fighting back.

Hell…. his wife showed more testicular fortitude than he did. I remember when she was on “Today” with Matt Lauer and said how she couldn’t believe the lies the media gets away with. Lauer almost had a stroke. A Republican is not supposed to challenge the Almighty Media!

Courage however, is contagious and as Donald Trump demonstrated,  you could take on the DC establishment and the press in American politics and not only survive, but WIN!

And albeit at a slower pace than I would wish, we are adding politicians like Kari Lake to the scene every day who are demonstrating courage against the Democrat Party machine and the lying scum in the media.

This is the whole reason Katie Hobbs is too frightened to debate Kari Lake.

Remember, Kari Lake walked away from successful 30 year career as a member of the very same media she attack’s today. Anyone who watched the local news on FOX10 in Phoenix knows who she is. She and John Hook had been the lead anchors there for years. Today, Lake combines wit that could raise blisters and the fierceness of a lion when she puts the media in their place. That’s why the media voices quiver with sheer terror as they pull out their hair in futile attempts to denounce her.

Let me add one more thing, as a person who spent 45 years of my life working in the media, I have nothing but the highest respect and admiration for her instinctive clarity and passion in exposing them for the fraudulent charlatans they truly are.