Skip to content
Dr. Seuss The Culture of Cancellation

The Left Misses the Point About Dr. Seuss & The Sneetches 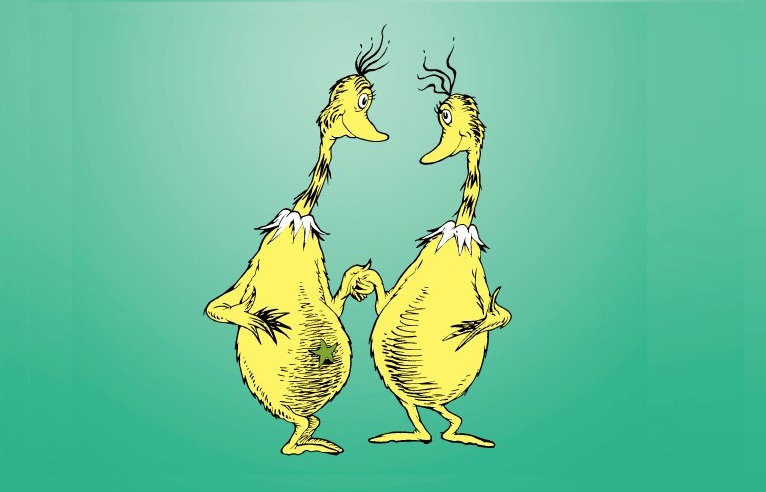 By The Deplorable Jaz McKay

Too fully understand why the ‘Woke Folk’ are waging a war on Dr. Seuss you have to recognize the motivation and objective of something called ‘critical race theory,’ A concept of promoting identity politics to be used as a tool to sow hatred among people who don’t hate each other.

As I explained in a previous article entitled “Why the ‘Woke Folk’ Are Waging War Against Dr. Seuss”, the Left has redefined racism, through ‘critical race theory’ to include the demonization of the notion of achieving a ‘color blind’ society.

They suggest that somehow race neutrality or ‘color blindness’ invalidates the identity of people of color and therefore, seeing all of us as God’s children, created equal in His eyes is now a racist concept.

Which brings us to the article that seems to have been the catalyst for the Dr. Seuss cancellation, entitled “It’s Time to Talk About Dr. Seuss”, published at the “Learning for Justice” website.

Here they cite a study from St. Catherine University and the first example of overt racism in any of Dr. Seuss’s books mentioned in the article is ‘The Sneetches’, first published in 1953.

Then one day a man comes to town with a machine that will put a star on the Plain-Belly Sneetches. So the Plain-Belly’s go into the machine and sure enough ‘Boom’ they have stars on their belly’s.

How on earth is that racist?  How can anyone justify suggesting that delightfully, sweet story line is a perpetuation of a racist or divisive message? By applying this twisted notion of ‘critical race theory,’ that’s how.

According to the Learning for Justice Article,

“… instead of encouraging young readers to recognize and take action against injustice, the story promotes a race-neutral approach.”

Pardon me but, these people are idiots and they entirely miss the point of the story. The Sneetches is about much more than prejudice or racism, and the more I think about how the Left is miss-representing it, the more it pisses me off.

Now, I’m no man bun wearing, academic smarty pants with some fancy, schmancy Liberal Arts degree from a big North Eastern university, sitting at a sidewalk cafe, rolling a clove cigarette, sipping a pinot grigio, listening to Billie Eilish with my IQbuds2 while contemplating the negative correlation between intelligence and physical attractiveness.

I’m just a regular guy with a high school education but, because I understand that all anyone needs to get by in the real world is common sense, a big mouth and a great ego, I feel I’m more than qualified to bloviate on what I think is really going on in The Sneetches and it’s much more complex than simply the belief that “racism is bad.” And that’s why out of all of the Dr. Seuss books, it’s my favorite.

Yes The Sneetches seem at first glance to describe a situation analogous to racism. The two types of Sneetches are separated by only a small difference in appearance yet live segregated lives because one type ostracizes the other.

Then, when “a stranger drove up in the strangest of cars” the story line completely changes.

Sylvester McMonkey McBean is an inventor, (I’m surprised the Woke Folk don’t have a problem with him being a monkey. Well, let’s not give them any ideas) an entrepreneur and his solution to The Sneetches problem is to put stars onto plain bellied Sneetches with his machine thereby rendering the whole star-apartheid situation pointless.

As a matter of fact, any comparison to racism in this story is pointless. You simply can’t change your race, but here we have a guy claiming the Sneetches can be changed.

Now you may be thinking that Mr. McBean is a wonderful fellow for coming to this town to help out in this way, but remember he’s not doing this out of the kindness of his heart, he’s doing this for three dollars cash money to start.

Fair enough, a man should be rewarded for his invention and his investment and initiative, so he’s still doing a good thing right?

Well, wait a minute; because as soon as the problem is solved and ALL the Sneetches have stars on their belly’s the original Star-Belly’s aren’t happy saying, “Then of course, those with stars all got frightfully mad. To be wearing a star now was frightfully bad.”

That’s when McBean announces a new machine to remove the stars from the bellies of those who “had stars at the start” allowing them to reclaim their pole position in society by reversing the rules and for a few more dollars the Star Belly’s have their stars removed.

And so having solved that problem he then turns the tables once again and offers the first group the chance to revert back to their non-starred state, all of this for a price.

“And then” Dr Seuss says “as you can probably guess, things really got into a horrible mess”.

The price keeps going up, the Sneetches keep racing through both machines until all of their money is gone at which point Mr. McBean packs up and leaves town and laughed as he drove in his car up the beach, “They never will learn. No you can’t teach a Sneetche.”

You see the real point Dr. Seuss is making isn’t about racism , but greed and the foolish act of the pursuit of status symbols.

The real point he’s getting at, his real target is the kind of crass commercialism and consumerism that preys on your fears of being ostracized by your peers for exactly the kind of trivial crap found at the start of the story, and which then, by offering some silly solution takes your money, only to quickly move the goalposts in short order and take even more of your money while you just try keep up.

Think about it, the fashion industry, the cosmetics industry, and personal hygiene, the work out industry, the automotive industry and especially the tech industry. His target is any industry that attaches status to whatever product they’re selling and then rapidly changes in order to keep demand high and keep consumers wanting to always have the latest gizmo.

In this book the good Doctor is taking aim at the idea that people should be judging each other on what clothes, makeup, deodorant, shoes, car, or mobile phone, iPod, or laptop they use. He’s showing us how ridiculous those kind of judgments are and how we’re all being exploited by unscrupulous marketers, influencers, businesses and advertising agency’s that only want to profit from our own petty and insipid insecurities.

The Sneetches has a much more complex moral than simply the notion that “we should treat all people equally because we’re really all the same deep down.” That’s just short sighted and myopic in my opinion.

And that’s why it’s my favorite book by Dr Seuss. He’s managed somehow to condense one of the trickiest and most precarious aspects of modern life, something we all struggle with and one that’s if anything is getting worse as time goes by, into a brilliantly simple fable.

Rather than cancel this book or demonize it, rather than hide it from our children because of the insecurities of a few simple minded charlatan’s in the “Race Hustle Industry” I want more kids to read it and learn this lesson. I want them to recognize how ridiculous the ways we differentiate ourselves from each other are, but more than anything I really want them to look out for, recognize and avoid people like Sylvester McMonkey McBean.

All that’s required to understand the overarching message is to look at the last few pages of the book and the beleaguered expressions of bewildered bamboozlement on the Sneetches faces as McBean skedaddles with all of the their loot.

It’s only when “every last cent of their money was spent” that the Sneetches realize the error of their ways “and that Sneetches are Sneetches and no kind of Sneetch is best at the beaches.” Dr Seuss made it clear, the moral of the story is, that the quest for status through materialistic tokens will never bring the true contentment and happiness you’ll find in personal relationships, there’s so much more going on here than just prejudice and bigotry……. if you can just get past your own.

2 thoughts on “The Left Misses the Point About Dr. Seuss & The Sneetches”