Skip to content
Cultural Marxism The Culture of Cancellation

Why the ‘Woke Folk’ Are Waging War Against Dr. Seuss 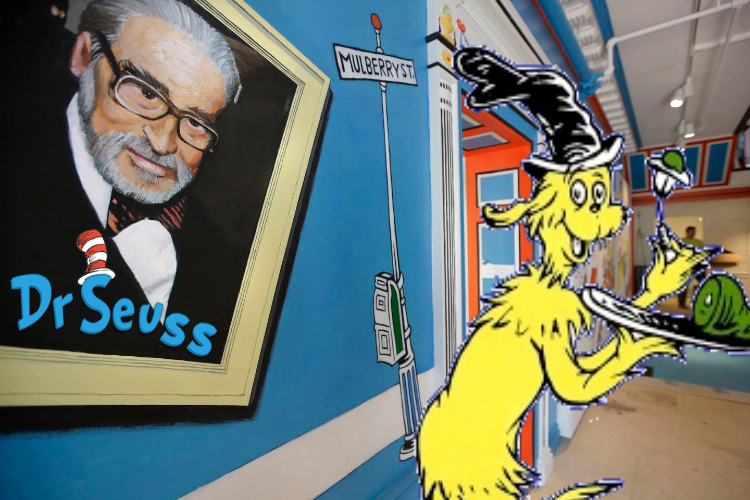 By The Deplorable, Jaz McKay

As a child of the 1960’s I was raised on Dr. Seuss. My mother belonged to a book club that sent us a new Dr. Seuss book each month and I cannot tell you how excited I was when the latest book would arrive. I bought Dr. Seuss books for my children and subsequently my grandchildren. As it turns out, my mother and I were unknowingly a part of a ‘white supremacist’ plot to indoctrinate me, my children and grandchildren to become raging racists, gnarly Nazis and backwoods bigots over those many years.

But thanks to all the ‘Woke Folk’, now I know the error of my ways. If not for the tireless efforts of The Loudon County, Virginia School Board one of the wealthiest districts in America, or The Southern Poverty Law Center I’d never have known what a vile racist Dr. Seuss really was, and in turn, what utter nonsense that assertion is.

As a result of this bullying from the ‘Woke Folk,’ Dr. Seuss Enterprises ( the company which manages his publishing catalogue ) says six Dr. Seuss books will no longer be published due to racist and insensitive imagery, a move that will affect such titles as If I Ran the Zoo and Scrambled Eggs Super!

Dr. Seuss published nearly 60 books over his decades-long career, and many of them remain top sellers. They’ve been translated into dozens of languages and are sold in more than 100 countries around the world.

The list of affected books does not however include any of his highly celebrated titles such as Green Eggs and Ham, How the Grinch Stole Christmas, The Cat in the Hat or The Lorax. It does include his very first book, And to Think That I Saw it on Mulberry Street, which was published in 1937.

The six affected titles are:

The ‘Woke Folk,’ by the way, will tell you that Dr. Seuss books are NOT being canceled, but that would be, like every word they utter, a bold faced lie. If the books have not been canceled, why is the company no longer publishing them? That sounds like they’re canceled to me.

So, What is it that’s ‘racist’ and ‘offensive’ about Dr. Seuss books?

Well, we’ll have to go to the source of this latest outrage, and that would be a far leftist group called, “Learning for Justice,” formerly known as “Teaching Tolerance,” who recently published an article called “It’s Time to Talk About Dr. Seuss” on its website. The article cited a study from St. Catherine University that said, “Seuss’s original work as a cartoonist, before he became a beloved children’s author, was full of ‘orientalism, anti-blackness, and white supremacy.”

So that’s how this all got started? It’s not the books themselves? It’s about his early work as a cartoonist BEFORE he started writing his beloved children’s books?

Well, in the ‘Woke World’ it makes perfect sense actually, because that’s a big part of how the they push their ‘culture of cancellation’ on us every day. How many times have you heard or read about someone being kicked off social media or losing their job because of something they said or posted 8 or 9 years ago? Remember when Kevin Hart was canceled from the Academy Awards for ‘homophobic’ Tweet’s he had made 10 years earlier?

But eventually, Learning for Justice does delve into the offensive elements of Dr. Seuss’s children’s books and first on their list is ‘The Sneetches’, which isn’t even one of the 6 works currently stuffed down the memory hole, but is in fact, one of his most popular tomes.

Okay, so why is ‘The Sneetches’ considered racist?

After all ‘The Sneetches‘ is considered by most people to be a story about prejudice: the arbitrary characteristics we focus on in trying to justify treating people differently. (It’s actually much more complex than that, which is something I’ve covered in another article. You can read that here.)

Then one day a man comes to town with a machine that he says will put a star on the Plain-Belly Sneetch. So the Plain-Belly’s all line up and go into the machine and sure enough as they exit the other side they have stars on their belly’s.

This causes quite a stir and the Star-Belly Sneetches become confused because no one can remember who had stars and who didn’t. In the end, the Sneetches learn that deep down they’re really all the same and live happily ever after…

And that my friends, is now somehow racist.

How is that racist, you ask? Simple, the ‘Woke Folk’ don’t believe that people are equal at all. They believe that deep down inside, beneath our skin color, or our culture or our nationality, that past victims of racist behavior are superior to those who are not.

The Learning for Justice article concludes…

“… instead of encouraging young readers to recognize and take action against injustice, the story promotes a race-neutral approach.”

In other words the ‘Woke Folk’ believe that promoting a ‘race-neutral’ or a color blind societal reality is racist because people are NOT all the same. That the past injustice, in this case experienced by the Plain-Belly Sneetches requires ‘action’ to be taken. What kind of action they don’t say, so I can only assume they mean having a RIOT in the streets and getting revenge on those evil damned Star-Belly Sneetches.

This was also something briefly verbalized by Dr. Omekongo Dibinga, a professor from American University who debated Leo Terrell on Sean Hannity’s television and radio show this week.

Before being interrupted by a very agitated Leo 2.0, Dr. Dibinga said “When you look at books like ‘The Sneetches” for example, that’s been used as anti-racist literature but when you take a deeper look you see that it tells you that it’s okay to be color blind.”

Yep it’s true; the latest form of racism, the new and improved definition of racism includes the belief that “All men are not created equal,” that somehow ‘color blindness’ invalidates the identity of the many various members of the permanently aggrieved population among us. Therefore, seeing all of us as God’s children, created equal in His eyes, is a racist theory. The absence of focusing on some arbitrary characteristics of the people around us and not being obsessed with those characteristics is racist. If you look at a black man, and first and foremost you see a fellow human being, not just a black man, well then, you’re a racist.

Which is what lies at the core of the current professional race debate in America. Twist everything under the sun up into a knot and eventually make everything about race and racial disparity. The objective isn’t to make anybody’s life better, it’s to create animosity among other races which the Left hopes will generate the racism they need to promote division.

That’s the motivation for the current wave of something called ‘critical race theory,’ a warped concept that when deployed will admittedly never solve the racism problem. That’s because the ‘Woke Folk’ have zero interest in ending racism. Instead, they’ve made essentially the same point over and over again, that racism is an unsolvable problem. If you’re “white,” you are eternally a racist, especially if you don’t believe you’re a racist. The absence of racism is now racist. Confused yet? That’s the whole idea.

The goal here is two fold, first to piss off white people to the point they push back and revert to the very real racism that existed in this country’s past. And second, piss off black people to the point they riot and burn down cities while making outrageous demands such as reparations for slavery, the abolishment of all law enforcement and whatever else Black Lives Matter is demanding these days.

They’re working overtime to divide us along racial lines in order to artificially create hatred for each other for the purpose of enslavement and control. Ever hear the phrase ‘Divide and Conquer?’ That’s the very foundation of critical race theory. And unlike their attempts to crash our economy by overwhelming the welfare system as described in The Cloward-Piven Strategy, critical race theory is something the Left isn’t even remotely trying to hide. They write tons of books about it, it’s taught in our university’s, they have lesson plans for K-12 education promoting it and they even force it on us in the workplace. And you better not complain, if you do it’s proof you’re a racist.

The really scary part is, 20th century history is replete with examples of the successful implementation of this tactic of division from the Bolshevik Revolution and the Nazi’s rise to power to the Chinese Cultural Revolution of 1966. And just as it was then, the end game today is to gain the complete control of ‘we the people‘ through a form of Socialism/Communism.

The irony of it all, is that the Left in this country, and throughout history have always been the most notorious racist’s of all.

Please understand I’m not making the claim that the cancellation of Dr. Seuss is directly connected to those who are pushing critical race theory or the Marxist movement in general. It is however the residual effect caused by that way of thinking. And while it may seem trivial, it’s useful in its utter and absolute ridiculousness. The more that the rational thinking among our population roll our eyes at the latest politically correct foolishness the ever wider the divide between us will grow. And little by little we’re nudged closer to the breaking point.

It’s all one gigantic lie, we’re being manipulated and if you’re paying attention you should realize that and it should be as obvious as the nose on your face.

The fact is, neither Dr. Seuss nor his books are racist at all.

As I explain in the article: “The Left Misses the Point About Dr. Seuss & The Sneetches.”

The History of Blacks and Reds