Pelosi Payoff is the Swamp Taking Care of the Swamp 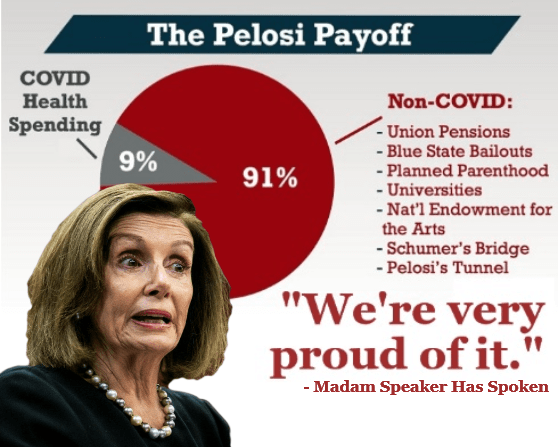 The 219-212 vote sends the $1.9 trillion package to the Senate, where it is certain to undergo changes next week.

It’s important to note that not one single Republican supported the pork laden monstrosity and two Democrats voted against it: U.S. Reps. Jared Golden of Maine and Kurt Schrader of Oregon. So if you’re looking for bipartisanship you’ll find it on the “NO” side of this vote today.

“The Pelosi Payoff to Progressives Act is another instance of the swamp taking care of the swamp rather than hardworking Americans. The bill contains a $350 billion bailout for locked-down, poorly managed states with no strings attached. The sneaky formula used by Democrats ensures that most of the money goes to liberals in California and New York rather than to rural communities. Pelosi’s Payoff also provides an additional 15 weeks of paid leave to federal bureaucrats so they can stay home with children who have remote school while the rest of America is left with the consequences of continued school closures.

This is nothing but a money laundering scheme. Payback the unions and other big donors who then funnel the money back to Pelosi. PERIOD!

During the Oversight Committee’s consideration of the Pelosi Payoff, Democrats opposed every Republican amendment, including amendments requiring states receiving funding to open schools.

In an op-ed published by Fox News earlier this week, Ranking Member Comer and Budget Committee Ranking Member Smith outlined how the Democrats’ spending bill is “the wrong plan, at the wrong time, for all the wrong reasons.”

Republicans on the House Oversight Committee outlined the wasteful spending in the Pelosi Payoff in “Waste Watch.”

Author: Jaz McKay is a 45 year veteran of Talk Radio, a writer, public speaker, activist, & editor and founder of The Deplorable Patriot website.