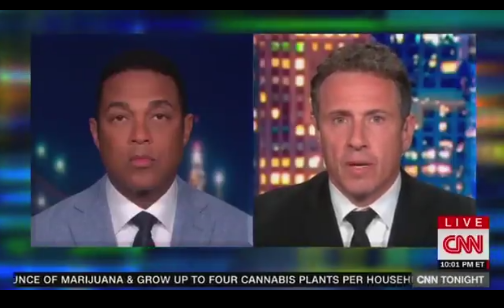 As far-left Black Lives Matter activists condemn an Ohio police officer for fatally shooting 16-year-old Ma’Khia Bryant to save a teenage black girl she was attempting to stab, CNN’s Don Lemon and Chris Cuomo agreed the officer did the right thing.

During a segment on Wednesday night, both Chris Cuomo and Don Lemon agreed that the evidence and body-cam video shows the police officer had little choice but to fire his gun in order to protect someone.

“When they roll up on the scene, they see people tussling around. Someone has a knife,” he continued. “And their job is to protect and serve. Every life on that scene. And if they see someone who is in the process of taking a life, what is that decision, what decision do they have to make?”

To those who would say the officer should have used a taser, both Lemon and Cuomo agreed that a taser would likely not have worked at that distance and in that amount of time.

“Tasers, they don’t always connect. So, you’ve got to get two prongs or what have you, and it has to connect to whatever,” said Lemon. “I see it, if the woman in the pink was my sister, niece, wife, whatever, you have to make a decision. Is one life on that scene more valuable than another? And if someone is trying to take a life, on that scene, do you protect the life of the person trying to take the life, or do you protect the life of the person whose life is in imminent danger at that point?”

Cuomo and Lemon expressed sympathy for the officer and that he must live with the fact that he killed a 16-year-old girl to protect someone else.

“I feel for the officer. You can hear it in his voice,” said Cuomo. “When he said – the man on the side was saying, ‘You shot my baby, you shot my baby.’ And he said, ‘She had a knife. She went right at her.’ You know, this is something that he’s going to have to live with also.”

Cuomo concluded that police are essential and that they do have to protect people at certain times.

“The analysis is only of the instant circumstances. I’m saying, if you want to have this contextual conversation that people seem to want to have about what else we can do, people fight with knives all the time, do we really need cops?” concluded Cuomo. “The answer is no, learn how to control your kids, and don’t be so violent and we won’t need cops. But that’s not our reality. And cops get called to our lives all the time for the worst situations.”