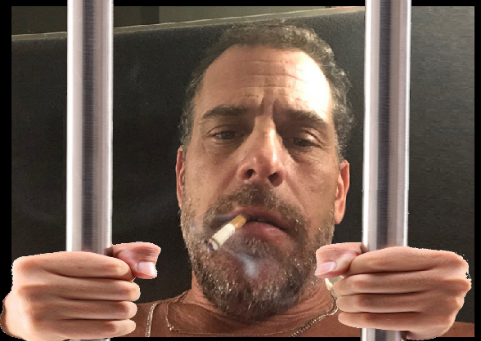 After the national disgrace of the public showcase of dementia known as Joe Biden’s First Press Conference this past week, there may still be one private citizen who’s glad he’s president, namely, his son Hunter, who would otherwise be in prison.

Way back in October 2018, Hunter Biden was indulging in an indecorous relationship with his dead brother’s wife Hallie. The story goes that on discovering he had a .38 caliber handgun in his possession she took it and threw it in a dumpster behind a Wilmington grocery store.

When she decided to return and retrieve the gun, it was gone. The story is a little unclear at this point because somehow the cops got involved and sure enough the gun was missing from the trash can. In as much as the store was across from a school it was feared that it may have been found by a student and could be misused, then the story gets even more disturbing, if that’s possible.

Then the Deep State got involved.

Now, due to the fact that the election is over and Old Uncle Joe’s sleeping in the White House Twitter and Facebook don’t need to suppress the story. It was even reported in Politico:

The gun store owner refused to supply the paperwork, suspecting that the Secret Service officers wanted to hide Hunter’s ownership of the missing gun in case it were to be involved in a crime…

The owner of the gun store did the right thing and appropriately turned over the paperwork to the ATF.

I guess the Biden’s were not under Secret Service protection at the time, at least, not formally so the question remains, what the heck were they doing trying to intervene?

Then I guess some guy who had been scavenging for recyclables in the dumpster found the gun and later turned it in. There were no charges. Maybe there should have been:

POLITICO obtained copies of the Firearms Transaction Record and a receipt for the gun dated Oct. 12, 2018.

Hunter responded “no” to a question on the transaction record that asks, “Are you an unlawful user of, or addicted to, marijuana or any depressant, stimulant, narcotic drug, or any other controlled substance?” Five years earlier, he had been discharged from the Navy Reserve after testing positive for cocaine, and he and family members have spoken about his history of drug use.

Since then, Hunter’s drug-oriented lifestyle has been photographically documented thanks to his Wiley laptop.

Lying on a Form 4473 is a serious felony and, believe me when I tell you if I had done it, I’d go to jail and be forced to pay a hefty fine. But not Hunter Biden I guess.

Prosecutions are somewhat unusual I’ll admit but I know of at least two cases in California where people were prosecuted for lying on the 4473 forms because they had marijuana cards. And besides, don’t forget that Hunter is already under investigation, having been the subject of multiple criminal probes. If they could get Al Capone for tax evasion…well, I’m just sayin.’

As noted at Breitbart,

The news comes as Democrats begin to vehemently pursue gun control measures, with President Biden pushing Congress to act on H.R. 8 and H.R. 1446 and calling for an “assault weapons” ban…

But what am I talking about? Everyone knows gun laws only apply to law-abiding citizens, not to Joe Biden’s son.

Author: Jaz McKay is a 45 year veteran of Talk Radio, a story teller, a public speaker, an activist, and is the editor and publisher of The Deplorable Patriot website. He lives in Bakersfield, California with his wife and their dog and two cats. He’s been called the Uncommon Voice of the Common Man and is a Super Spreader of the Truth.