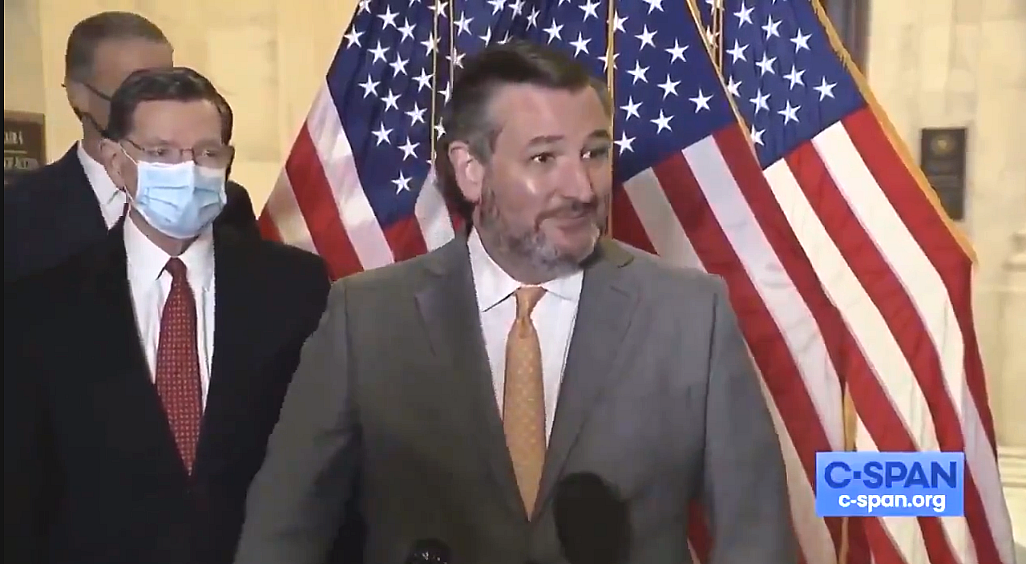 My father always told me that ‘evil was powerless if the good were fearless’ and that has become the driving force of inspiration for the creation of this website. It’s encapsulated in two simple words, “Forever fearless” which has become our mantra. This is more important today than ever before.

The only power these evil forces that surround us have is the power we surrender to it. And the only way to combat this tyranny is to stand up to it and literally get in its face! It’s called pushback and I encourage everyone to practice it.

The size and scope of your pushback is irrelevant, the point is to just do it. And Senator Ted Cruz did just that the other day against the COVID-19 tyranny of a mask-shaming reporter.

It was a small thing to do, but it should serve as an inspiring moment to everyone.  The overreach of the left won’t last forever if Deplorable Patriots stand up to liberals’ and their weaponized hysteria.

Ted Cruz demonstrated how it’s done during a news conference on Wednesday.

In this video of the conference, a reporter can be heard asking, “Would you mind putting a mask on for us?”

Cruz responded, “Yeah, when I’m talking to the TV camera I’m not going to wear a mask, and all of us have been immunized,” gesturing to his fellow lawmakers.

The reporter pressed further and insisted that Cruz putting on a mask would “make us feel better.”

Cruz, however, fired back, “You’re welcome to step away if you like,” and added that the “whole point of a vaccine” was so that he no longer had to wear a mask.

Frankly, he was much more polite than I would have been.

The truth is the whole point of the mask is to make these brain dead liberals feel better about themselves, it has nothing whatsoever to do with science or health. PERIOD!

That’s why you see reporters wear them even though they are probably immunized and more than 6 feet from anyone. We don’t need to hear what they are mumbling; we just need to know that they are wearing their masks even when it is absurd and pointless to do so. For them it’s a reminder to us how virtuous they are. What ‘good people’ they are and a reminder to you that YOU MUST ALSO COMPLY! Otherwise you wanna kill grandma.

And the 6 feet mandate? That has never had anything to do with science, and has been used to crush businesses and as an excuse for school closures for a year.  We know that now, and 3 feet is the new magic distance, emphasizing the fact that arbitrary coronavirus requirements are nothing more than symbolic.

Hopefully there are trap doors nearby if mask-shaming reporters take Senator Cruz’s advice and step back.

Author: Jaz McKay is a 45 year veteran of Talk Radio, a story teller, a public speaker, an activist, and is the editor and publisher of The Deplorable Patriot website. He lives in Bakersfield, California with his wife and their dog and two cats. He’s been called the Uncommon Voice of the Common Man and is a Super Spreader of the Truth.

Woman Tears Up Woke Ads On Subway Car…THIS IS WHAT PUSHBACK LOOKS LIKE!