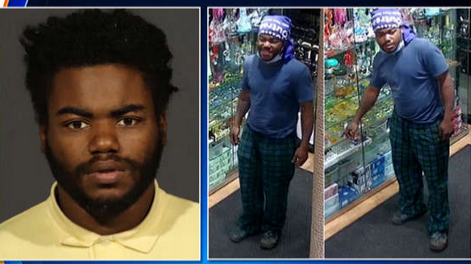 Sitting at the top of the Democrat priorities list is letting violent criminals run loose and denying decent, law-abiding citizens their constitutional right to self-defense. To see how this works out, look at New York City, where Democrats have consolidated absolute, 100% control:

• Carl Phanor, 29, was taken into custody after allegedly choking, raping and robbing a 43-year-old woman while she was jogging in Manhattan’s West Village

• He then removed her clothing, raped her, and stole her phone, headphones and wallet before fleeing the scene on a Citi Bike

• Police arrested the man, who has 25 priors, at the Port Authority terminal after they found him trying to use the victim’s credit cards at a Target in Midtown

• It’s the latest in violence that has plagued New York City, which has seen a nearly 30 percent rise in violent crime so far this year

Thankfully Carl Phanor was arrested, but the question remains, what next? What excuse will be used this time to cut him loose so he can continue to victimize the innocent people of New York City? Obviously his mommy didn’t love him, and his daddy was never there to teach him the difference between wrong and right, and oh, I almost forgot, the police are racist, blah, blah, blah. I’m fucking sick of the excuses.

Meanwhile the biggest moron drawing a paycheck from ABC, Joy Behar tells us from the NYC set of The View that violent crime is falling under Biden’s rule.

This simple graph explains just how stupid the “ladies of the View” actually are while giving you the simple truth about crime in NYC under Biden:

The 25 priors, which include at least two sex crimes, signify that the brain-dead liberal apparatchiks infesting our criminal justice system who let this deranged person run free are accomplices in every crime he’s committed and should be prosecuted, starting with that pathetic excuse for a prosecutor and Soros tool, Alvin Bragg.

In fact the same should apply to every Soros-backed leftist DA in the country who has been wreaking havoc and spilling blood across the pavements of major American cities. George Gascon (Los Angeles), Kim Foxx (Chicago), Larry Krasner (Philadelphia), and Kim Gardner (St Louis) are among the most egregious of the bunch and all deserve not only to lose their jobs but be charged with crimes and sent to prison.

It’s worth noting also that while the rape victim in New York City last week did not have the privilege of carrying a gun while jogging in the city, which is afforded as defense by the Second Amendment, other parts of the country where the Constitution is still honored have much lower crime rates because criminals never know who might be armed.

Even in cities and states where criminals are incarcerated, making it worth the effort to arrest them, police cannot be everywhere at all times. They couldn’t be everywhere even before they were demonized, demoralized, defunded, and marginalized by Democrats in the name of Black Lives Matter. So, in our larger cities, now more than ever it’s vital for simple survival that law abiding citizens all carry concealed weapons for defense of life, liberty and property.

Do Not Become A Victim. Do Not Become A Statistic. Learn your state and city laws, apply for your CCW permit, get the training you need and for Gods sake, fight back. Your government can and will not keep your family safe.