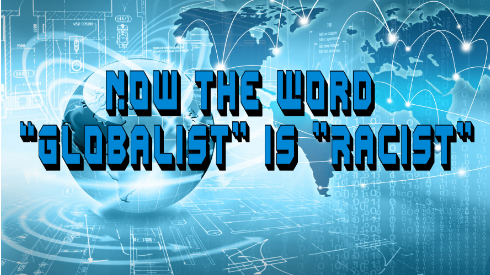 If you follow the world of “postmodern philosophy”, the objective reality is either nonexistent or irrelevant; all that matters is the artificial world we create with words. As a result, leftists view the control of language as the road to ultimate power. This is why the banishment of words from our vocabulary are coming fast and furious. When they react to certain words it’s a great way to judge that if you have found a soft spot in their defenses. By using those words you’ve hit a raw nerve. Use the word “depravity” when discussing the LGBT agenda with liberals and you’ll see enormous fireworks. The word “globalist” so betrays their agenda that they have resorted to playing the anti-Semitism card:

Following what many, such as Brexit leader Nigel [Farage], have described as a “globalist coup” to install former Goldman Sachs banker and World Economic Forum (WEF) acolyte Rishi Sunak as prime minister, left-wing figures have attempted to make the very term “globalist” an off-limits slur, claiming that it is antisemitic.

I had no idea that Rishi Sunak was Jewish. I guess he threw me off by taking his oath of office on the Hindu scripture of the Bhagavad Gita rather than a Jewish text.

So I guess acknowledging that the money and power-hungry cabals of groups like the World Economic Forum are globalist is allegedly “a common antisemitic trope based on conspiracy theories about international Jewish power,” at least according to professional offended Jewish person Marie van der Zyl.

The linguistic dispute came to a head on Sunday, when a caller to the LBC radio station echoed Mr Farage’s sentiments in describing Sunak as a “globalist” who “doesn’t seem to love England”.

Delete the word “globalist” from your vocabulary right now, and remember that if you ever utter it, you are literally a Nazi.

According to Sangita Myska, an LBC host on the British phone-in and talk radio station owned and operated by the Global Media Group, the phrase “globalist” is offensive to Jewish listeners:

Banning words is something that fascists and communists do. There is absolutely nothing wrong with the word “globalist”. Those who try to criticize this word either do not understand English or they’re trying to subvert the public’s understanding of what’s playing out in front of their eyes. Look up the meaning in the dictionary, it perfectly describes the politicians we have today.

According to the Oxford English Dictionary’s definition of globalism: “The belief that events in one country affect those in all other countries, and that economic and foreign policy should benefit the world as a whole instead of individual countries.”

“Globalist” has nothing to do with Jewish people and is not Anti-Semitic. Period.