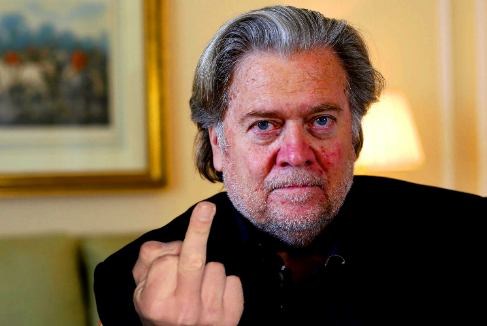 We all need to learn from Steve Bannon’s story, when the shit hits the fan you have to stand up and push back. The bogus Jan 6th Committee wanted another pound of flesh so they demanded he bow down before them and explain how he knew a day before the siege on the Capitol that “all hell is going to break loose tomorrow.” He said it on a radio show January 5th, the day before several hundred protestors were invited into the U.S. Capitol by law enforcement to sit in Nancy Pelosi’s chair.

As I’ve always said, ‘Evil is Powerless When the Good are Fearless’ and Steve Bannon is a testament to that saying. Just as the parents who stood up for their children at school board meetings or when tens of thousands of people took to the streets world wide to protest lock-downs and mask mandates, you have got to push back against the tyrants otherwise they’ll continue to encroach upon you until they’ve crushed your soul and commandeered your life.

The very idea that Steve Bannon was convicted of ‘Contempt of Congress’ is laughable, I’ve got news for Congress: Over 300 million people have contempt for Congress and you can’t jail us all! At least not yet. We will never sit back and allow the elitist, power hungry swamp dwellers of Washington D.C. to defile our great nation without a fight.

This is much bigger than just one man, I’ve always said that, since the day Trump came down the escalator. This is a movement of epic proportions and we will not allow what is happening to continue. It’s bigger than Steve Bannon, our corrupt local and federal government is jailing political dissidents & weaponizing our national security state against law abiding citizens. We won’t allow this to continue. Fourteen generations of blood and sacrifice for our republic are on the line.

The DOJ official that prosecuted Steve Bannon is a longtime Democrat activist named Matthew Graves. He was on the domestic policy committee for Biden’s 2020 campaign, he helped the Kerry campaign with VP vetting, and worked for Clinton’s re-election.

That my friends, is proof that the prosecution of Steve Bannon is pure political persecution.

Let us make this message clear. We are going on the offense and we won’t have to create sham committees and fabricate evidence because the corruption & crimes are real, and justice is coming.

The Democrats have made a big mistake right before midterms because the tens of millions of us who are free to vote were just given one more reason to cast our ballots and throw the commies out.

I STAND WITH STEVE BANNON!

I call on you to do the same, shoulder to shoulder, Be Like Bannon! Put up a fight! Get out and vote November eighth, and on November ninth put the fear of God All Mighty into the hearts and minds of every Republican who’s been elected, put them on notice, they damn well better do everything in their power to stamp out this injustice or we’ll take matters into our own hands!

Remember the words of Jefferson:

“What country before ever existed a century & half without a rebellion? What country can preserve it’s liberties if their rulers are not warned from time to time that their people preserve the spirit of resistance? Let them take arms, the remedy is to set them right as to facts, pardon & pacify them. What signify a few lives lost in a century or two? The tree of liberty must be refreshed from time to time with the blood of patriots & tyrants, it is it’s natural manure.”

Steve Bannon’s Jail Sentence is Blowing Up in Democrats Face