Steve Bannon’s Jail Sentence is Blowing Up in Democrats Face 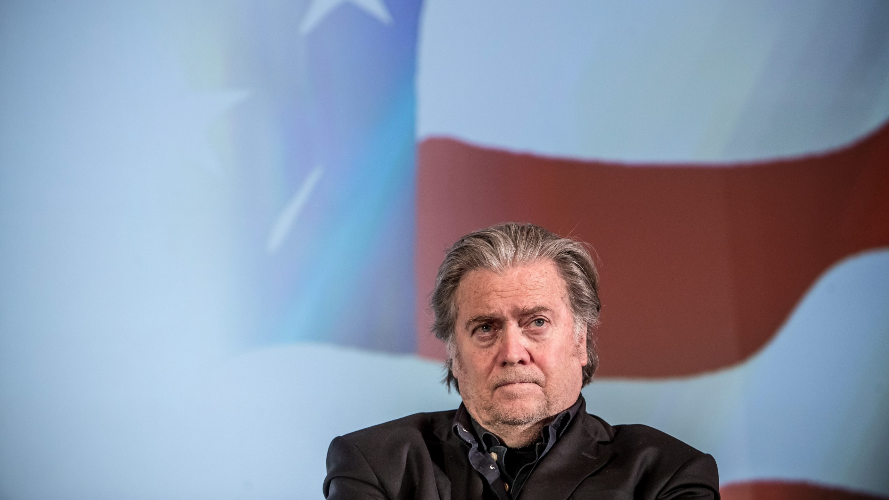 A judge has sentenced former Trump political adviser Steve Bannon to four months incarceration and a $6,500 fine for criminal contempt of Congress. The judge says he’s prepared to let Bannon remain free while he appeals his convictions as Bannon is unlikely to flee or pose a danger to the community.

The way Democrats are celebrating you’d think Steve Bannon deleted 33,000 federally subpoenaed emails or something. Hunter Biden laundered cash for his Vice President father while recording himself smoking crack with Russian hookers so naturally Steve Bannon is going to jail.

Bannon appeared in federal court this week and was sentenced for refusing to tell The House Select Committee what he meant by comments he made on a radio show the day before the January Sixth Capitol attack. That’s it. That’s what this is all about. They wanted to know why he said a day before the siege on a radio show that “all hell is going to break loose tomorrow.”

Remember also, Bannon wasn’t even a part of the Trump Administration at that time, Bannon’s employment in the White House ended on August 18, 2017, just under a year after coming on board as the Trump campaigns chief executive.

Every president in history has refused to disclose information to Congress. These refusals are so commonplace that there is not even a comprehensive listing of how often they occur.

Also worth bringing up is the fact that the DOJ official that prosecuted Steve Bannon is a longtime Democrat activist. Matthew Graves was on the domestic policy committee for Biden’s 2020 campaign, he helped the Kerry campaign with VP vetting, and worked advance for Clinton’s re-election.

Tucker Carlson interviewed Bannon who said: “The Justice Department is completely & totally out of control & the FBI is out of control. That’s why I’m a big believer in defund the FBI.”

Important to note here that, Steve Bannon’s indictment on contempt of Congress charges was the nation’s first since 1983, and this whole thing provides a rare glimpse into one of U.S. lawmakers’ politically messiest and least-used powers, just ask Lois Lerner or Eric Holder about how little it’s used, but more on that in a moment.

The last successful prosecution reaches all the way back to Watergate and its aftermath when G. Gordon Liddy and Richard Kleindienst were convicted and pleaded guilty, respectively, for refusing to answer congressional questions.

The last indictment three decades ago was less historic: A federal environmental official under President Ronald Reagan failed to heed a House subpoena. The official, Rita M. Lavelle, who headed the Superfund, would go on to be acquitted of the contempt charge but later was convicted of lying to Congress. She was sentenced to six months in prison and fined $10,000.

Here’s how this ‘Contempt of Congress’ thing works: If a target of a congressional investigation refuses to comply with a subpoena, Congress can hold the individual in contempt. There are three forms of contempt – inherent, civil and criminal – each of which relies on a different branch of government for enforcement.

Congress has its own power to enforce a subpoena. However, to use that power, Congress has to conduct a trial and then find the individual in contempt. Because this process is lengthy and cumbersome, Congress has not used it since the 1930s.

Congress can also ask the courts to declare an individual in contempt. Known as civil contempt, this method requires a resolution authorizing a congressional committee or the House general counsel’s office to file a civil lawsuit. The courts then determine whether Congress has the right to the information it has demanded.

Congress used this power in the past three presidential administrations – Bush, Obama and Trump – to acquire information.

However, civil contempt is also slow moving. For example, Congress held Attorney General Eric Holder in civil contempt in 2012 for withholding information relating to Operation Fast and Furious, a Department of Justice policy that allowed certain illegal gun sales in order to track Mexican drug cartels. Congress eventually obtained some records, but it took seven years for courts to reach a settlement.

And therein lies the rub, nothing whatsoever happened to Eric Holder as a result of his contempt charge, and it’s not ancient history either, it’s still very fresh in everyone’s memory. Also the seriousness of the Fast and Furious investigation far outweighs the nonsense of January Sixth as well.

A gun running operation, organized by our own Justice Department to effectively flood Mexico with weapons and arm the drug cartels, which caused the deaths of countless Mexican citizens and even an American Border Control officer, doesn’t even come close to a few hundred protesters invited into the Capitol by law enforcement that day in 2021.

The fact that the Republicans refused to pursue a case against Holder is not a minor detail lost on those of us who demand transparency and accountability in our federal government. To this very day nobody in the Obama White House or the Holder DOJ has been held to account for their crimes. Yet a former campaign staffer in the Trump Administration is about to do four months in jail for doing exactly what Eric Holder got away with ten years ago, not to mention Lois Lerner, director of the Exempt Organizations Unit of the Internal Revenue Service. She was targeting and harassing selected conservative groups applying for tax-exempt status. Lerner was also held in contempt of Congress for refusing to testify at a congressional hearing and surprise, nothing happened to her either.

If this outrage is supposed to damage Donald Trump or those of us who support him, let me tell you something, it’s a failed operation. This conviction and jail sentence has actually solidified our support of Trump and the MAGA movement even more. Steve Bannon, just like the trespassing protestors of January Sixth is now another martyr to the cause, just another political prisoner of the Marxist elites that surround Joe Biden.

The idea that a man can be placed under investigation, let alone placed in a jail cell for saying “All hell is going to break loose tomorrow,” on a radio show the day before the capitol riot is a shockingly ostentatious attempt by the January Sixth Committee to put another feather in their cap just before the mid-terms. Everyone who was paying attention knew all hell was going to break loose that day, including Nancy Pelosi, and she did nothing to stop or even contain it.

The persecution of Steve Bannon should drive home the point that the United States government is no less repressive than its supposed opposites in Russia or China. Bannon is right: we need to stop conserving and start dismantling, starting with the FBI.

What you have here is just another reason why we need an honest congressional inquiry into what really happened in the days leading up to January sixth, and if the Russian Collusion hoax has taught us anything, it’s that the D.C. elites are willing to go to great lengths to crush their opponents and scuttle the truth. If we are to ever learn what actually happened, the the Democrats must first be removed from power.

I only hope Congressman Kevin McCarthy has the balls to do what needs to be done. That remains to be seen.