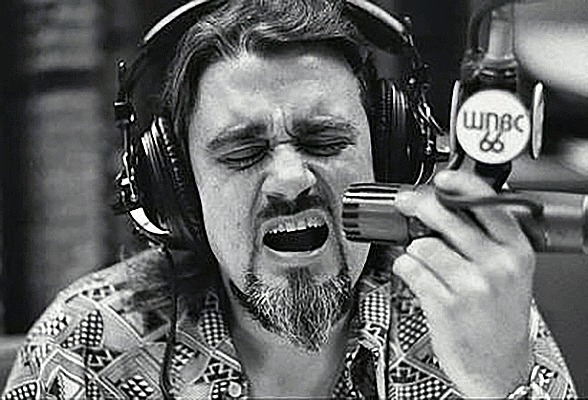 I was doing an Afternoon Drive radio show at WGAR in Cleveland back in about 1983.

We ran a weekend syndicated version of The Wolfman Jack Show every Saturday night. It was a hugely successful and had the ratings to prove it but I was soon to discover it was even more popular than I’d ever could have imagined.

The Wolfman flew into town one day to do a personal appearance at a downtown bar and he came on the air with me for what was supposed to be a short break promoting the event, he ended up staying over an hour and a half because we were having so much fun. He truly loved his craft and he and I really hit it off. It was one of the best shows I’d ever done in my short four year career.

After the show ended his limo driver followed me back to my house and we hung out at my place before heading out for the event. We sat in my living room talking about music, the radio business, his career and mine when he suddenly said to me, “Hey, you got any weed?”

I didn’t smoke much pot in those days and I told him I was sorry but I was without any bud at that moment. “No problem,” he said, “Because I do.” And then he let loose with that infamous laugh.

He pulled a plastic bag out of his jacket pocket and began rolling a joint on my coffee table. “This is some good shit Jaz,” he said, “Just wanted to warn you.”

Now, I’ve heard rumors about Willie Nelsons pot being pretty potent, well let me tell you, Willie Nelson’s stash got nothing on Wolfman Jack’s because buddy we got severely toasted.

Holy Toledo was that some wild weed….

While smoking doobies and drinking a few beers we sat in my living room, we continued talking about the business, he told me some great stories about his early days in radio, his experience’s with different celebrities he’d worked with and his philosophy of always putting the listener first above everything else. He told me the key to his success was that the only person he ever tried to please was the listener. They were the most important entity of the show, more important than even the advertisers or the station management.

I can’t begin to tell you how much I enjoyed talking to him, he was a wealth of information and I was soaking it up like a sponge. What I didn’t know until later that night was how I was about to see all of that in action.

About 8pm we headed out in his limo to the bar for his appearance. He was so great. A very down to earth guy with amazing talent. I was in my early 20’s at the time, and I saw him talking to listeners, I witnessed exactly what he was telling me about earlier.

The way he interacted with the people was something special to see. He signed autographs, posed for pictures and simply acted like every single one of the hundreds of folks there to see him was a dear old friend he hadn’t seen in years.

The one thing I remember most was, he always asked their name and then immediately said it back to them, later he told me this was a basic memory tactic he used to help him remember the persons name he’d just met. And it worked too, because when he was on stage talking to the audience, giving away the prizes and kidding around on the mic, he’d call out their names as he saw them in the crowd and maybe crack a little joke or something. He had the entire room right in the palm of his hand. What a host!

Then as he was just walking around the bar going from table to table he’d see someone he met an hour earlier and he’d call them by name and stop to talk to them, laugh and tell jokes.

He always said that the most beautiful sound in the world to anyone you meet, is their own name being said back to them.

A more cordial and easy going gentleman I’ve never met, he really impressed me with the way he connected with people. Every single one of them left that bar that night feeling like they had just spent an evening with their best buddy, or a long lost family member. And the next day at work I’m sure they we telling everyone at the office how they were hanging out the night before with their friend, Wolfman Jack.

There’s a saying in politics and show business about this type of event it’s called, “Shaking Hands and Kissing Babies,” or as the Wolfman called it, “Shaking Babies and Kissing Hands,” and nobody did it better than him.

You see, radio is a very personal communications medium and because most people listen to the radio alone they’ll often develop a personal relationship with the host. When you, as a listener make an effort to listen to a particular radio show or host every day you get to feel as if you know them personally, even though you’ve never actually met. Wolfman Jack knew that better than anyone I know, he gave back every bit of the love those people were showing him that night.

We kept in touch for a few years, sometimes he’d call me or I’d call him and we’d just talk about anything that came up. He was a lot like a mentor for me in those days. I miss the man, and I sure wish more young DJ’s could have the experience I had, watching a real professional not only work a microphone, but also work a room full of listeners.

Yeah, he was a legend, a master of the radio broadcast industry, but he was also a genuinely nice person who just loved people and making them happy. Sadly, there’s very few like him in radio today. And that’s too bad.