Seth MacFarlane is One Lucky Guy 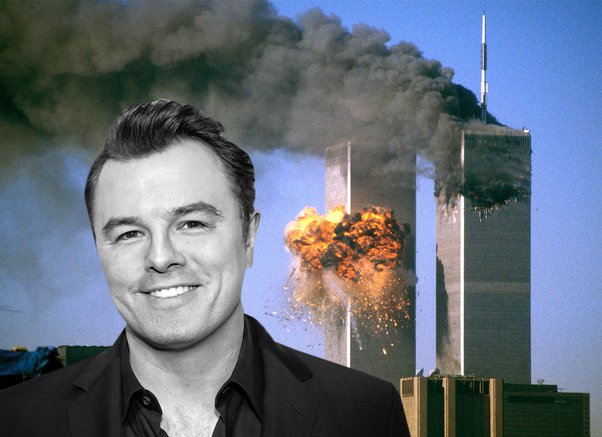 Seth MacFarlane, the filmmaker and creator of the TV series – Family Guy and American Dad is one lucky son of a gun.

First of all Seth got drunk on the night of September 10, 2001, thus overslept.

If the above only didn’t make him lucky enough – his travel agent accidentally (in fact fortunately!) messed up his flight time which he was supposed to board on the next day.

His driver rushed to get him to the airport on time, but he arrived 10 minutes late to board the plane, and when he went to the counter the gate was closed.

Left with no option, Seth thus chose to board the next flight.

He went to the lounge to wait, but he fell asleep.

He woke up roughly 45 minutes later to the hue and cry that the very flight he was about to board that morning if he weren’t late – Flight 11 had just crashed into the North Tower of the World Trade Center.

He then sat and watched the second plane hit the the South Tower.

He turned to the guy sitting next to him and said “My God, that was the flight I was supposed to be on. I was late. I missed it.”

Despite his brush with death, MacFarlane said he was “not a fatalist. I was not shaken to the core in the way that I changed my whole outlook on life, mainly because I had missed planes before. And you know, coincidences do happen. I mean, a day before that incident, I could have been crossing the street five minutes earlier and gotten hit by a car and never known that I just missed it.”

The Truth About This Iconic Photograph

Information We all Need to Pass to Everyone Especially those Liberal Crazy People.

25 Bits of Crucial Life Advice from an Old Guy