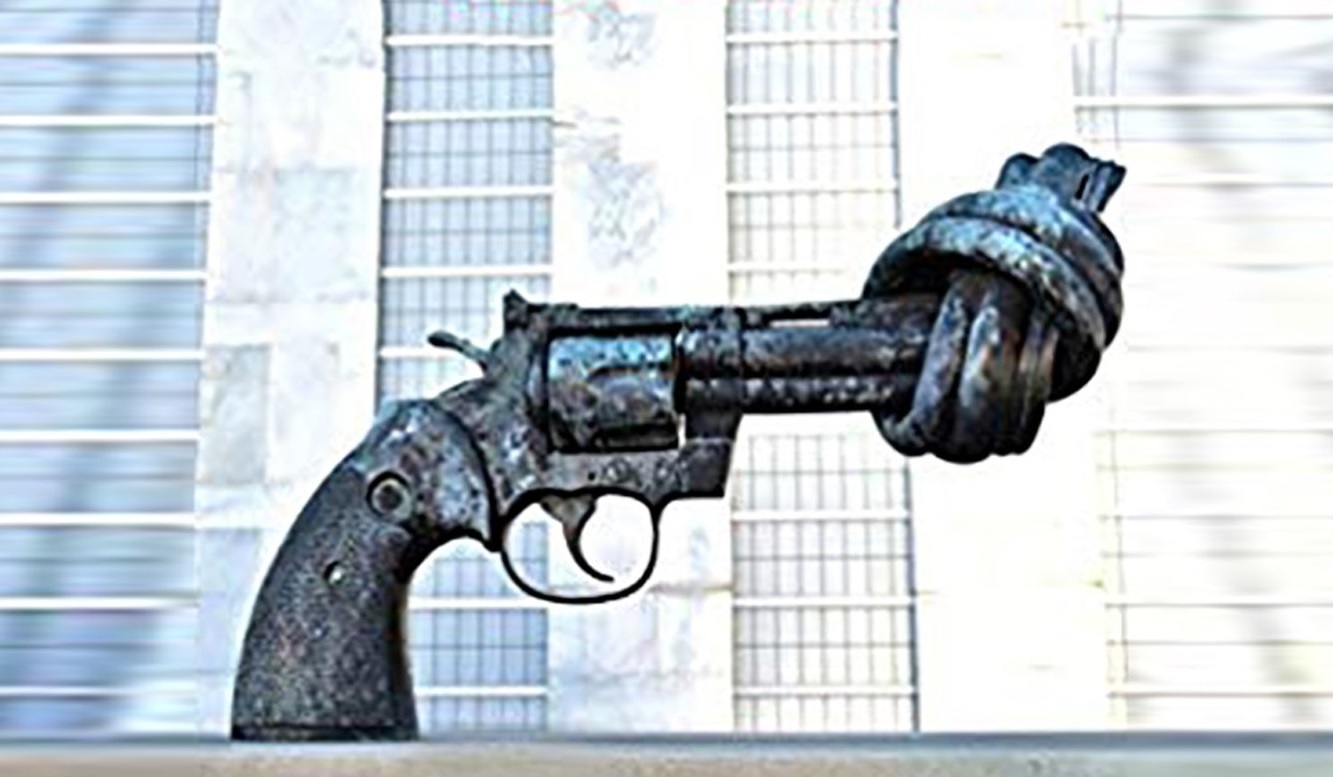 Why would they defund the police when it clearly raises the crime rates in those communities? Well, I’m no expert, but I think the answer is multifaceted. (If you still vote Democrat that means there’s a lot of reasons.) You also must examine the current wave of local District Attorneys, funded by George Soros, who are refusing to prosecute violent criminals to the fullest extent of the law.

By now I’m sure you all know one of the reasons the left is demanding a decrease in the size and scope of local law enforcement and prosecutors are allowing more and more criminals to walk free is to bring about so much chaos that the people will demand a federal police agency step in to take up the slack and offer them the protection they aren’t getting from local authorities. By abolishing local police the party ruling the federal government can also control all police powers, including those currently controlled on the local level. And the Democrat Party is working day and night to gain federal governmental control in perpetuity.

Leftist’s tell you this command and control is necessary in the interest of equity, that because thousands of people each year are funneled into the criminal justice system as a result of the deep-seated structural racism and white supremacy in local police departments and the court system, those local controls must be removed. Any student of history will tell you this is exactly what the Nazis and the Soviets did while gaining power.

They insist they must do something to eliminate the “racism” found under every rock in America today. Once again the Nazis and the Soviets used the same “racist bogyman” as well, none of this is new. And just as it was back then, this is a lie, but that’s not surprising, the left lies all the time, that’s the only way they can achieve any power and control. Well, that and keeping you as defenseless as possible.

Which brings us to the second reason for defunding police as well as such idiocy as “bail reform.”

Besides the elimination of localized police departments, the left correctly assumes in a society where crime is running rampant and the police are overwhelmed that people will begin to take matters into their own hands and… (gasp) buy a gun!

The leftist’s also correctly understand that many of these new gun owners may not receive the proper training and that eventually there will be shootings by citizens protecting themselves which will be deemed unjustified by the media and ultimately the courts.

Most likely they’ll use the same lie about “structural racism and white supremacy” being the prime motivation of these shootings. You’ve seen how they go after the police even when the shooting is obviously justified, how do you think they are going to treat a civilian? You all saw what happened to Kyle Rittenhouse. Don’t think you’ll be treated any different should you be in a similar situation.

And with committed Marxist D.A.s running our judicial system in America’s biggest cities, these armed citizens will soon become the latest white supremacist, scapegoat’s to be accused of carrying out racial atrocity’s by executing innocent black men on the streets of America. At that point the police can then take a breath and the armed citizen will be declared public enemy #1.

They’ll be clogging our jails with innocent civilians practicing self defense every other day. The media will then go into attack mode against the second amendment and this will then bring massive amounts of calls for more gun restrictions and or banishment of civilian possession of guns all together.

In fact they’ll even use the same privileged, white, liberal elites that brought them into power in the first place to promulgate their agenda of disarmament of the American citizenry.

Just look at Hollywood for example, over the past year it’s seen total violent crime increase by 25 percent with its homicide rate doubling, robberies are up 41.6 percent and shootings up 54.2 percent over last year. That is higher than the crime rate in the rest of the city, which saw homicides climb 12 percent over last year, robberies up 5.3 percent and shootings up 14.8 percent.

Beverly Hills is definitely a target as well. The city’s crime spike dates back to widespread looting following Black Lives Matter protests on Rodeo Drive, that left many high-end stores with broken windows and stolen inventory.

Smash-and-grab robberies are a daily occurrence in Beverly Hills along with mass shoplifting theft and even home invasions. Jacqueline Avant, 81, a philanthropist and the wife of music legend Clarence Avant, was killed in a home invasion robbery and shooting last month by a convicted career criminal.

Oprah Winfrey even tweeted: ‘The fact that this has happened, her being shot and killed in her own home, after giving, sharing and caring for 81 years has shaken the laws of the universe. The world is upside down.’

Now, residents are taking matters into their own hands, with a number of internet neighborhood groups agreeing to collaborate in the event of civil unrest.

As Los Angeles crime spirals out of control, even some of the city’s wealthiest residents have flocked to Beverly Hills’ only gun store to buy firearms to protect themselves and their belongings.

Beverly Hills Guns first opened by appointment only in July 2020, and has seen upscale residents from Santa Monica to the Hollywood Hills increasingly in a panic following some high-profile smash and grabs and violent home invasions in recent weeks.

Many are self-proclaimed progressives who’ve never even held a gun before, but who’ve been so spooked by soaring crime in the famously wealthy enclave that they’ve decided to arm themselves.

Last week Alan Nissel, an assistant professor of law at Pepperdine University told LA Magazine that even some of his most progressive colleagues are deciding to get guns – including many who ‘never held a weapon, never considered holding a weapon, but now feel it would be irresponsible not to.’

“Many of our residents are petrified,” he says of the company’s high-end apartment buildings and short-term residences, which stretch from Hollywood to Beverly Hills and Malibu. A manager at one of his Santa Monica buildings was recently held up at knifepoint. “Every single building that we manage has had private security services provided because of upticks, and we’ve never used private security firms in the past.”

Well I’d like to remind these progressive’s of an old saying attributed to Vladimir Lenin, or was it Joseph Stalin? Either way, the saying goes: “The last capitalist we hang shall be the one who sold us the rope.”

The residents of Beverly Hills are not only the source of the problem, they’re nothing more than sitting ducks for the very people they voted into power! Need I remind them that Beverly Hills is 81.9% white, and if they’re not careful with these “new toys” they’re suddenly rushing out to buy, any one of them could easily become the most current victim of the outraged mob of woke folk demanding justice for some poor gang member who was “trying to turn his life around” while committing a home invasion just “to feed his nine starving children.”

Look, while it’s perfectly understandable that these folks want to protect themselves, and I’m a fervent proponent of the right to keep and bare arms, I’d warn these “self-proclaimed progressives, who’ve never even held a gun before” at no time should you take the responsibility of gun ownership lightly. I sincerely hope and pray that each and every one of these “limousine liberals” take classes and get as much range time as possible.

But above all else I have one more vitally important bit of advice for the people in Beverly Hills: FOR THE LOVE OF GOD, STOP VOTING FOR DEMOCRATS!

It’s easy to say, you get the politics and policies you deserve but it’s seriously time to reevaluate your political ideology when the very people you’re voting for are quite literately trying to destroy you. The Democrat Party are 100% responsible for the circumstances the people of Beverly Hills, Hollywood, Westwood and the entire State of California are in today.

A good place for residents of the 90210 zip code to start making a change would be voting against Congressman Ted Lieu in the 33rd congressional district that includes Beverly Hills. Currently the three Republicans running in the June 7, 2022 primary are Derrick Gates, Patrick Jean Raphael and Paloma Zuniga. Any one of these candidates would serve the city of Beverly Hills better than the current holder of that office.

This goes for every community in every part of the United States today. If you are a Democrat voter it’s time to make a change right now! Otherwise you only have yourself to blame when they finally come for you. And mark my words, they will. They want you helpless and living in fear. That’s the way they control you.

Wake the hell up and start paying attention.