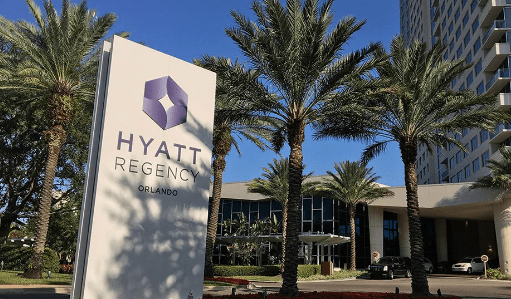 Lately it’s become a fairly common practice for the “woke leftist mob” to make demands on big corporations who then capitulate out of fear of boycotts and accusations of being labeled racist, sexist, transphobic, white supremacist Nazi’s.

For example, retail giant’s like Bed, Bath, and Beyond, Kohl’s, HEB, Wayfair, and others abruptly decided to cut ties with My Pillow because of Mike Lindell’s outspoken support for Donald Trump.

Are these companies really taking a principled stand in favor of crushing political dissent? No, they just gave into the “woke leftist mob” of brain dead liberals applying pressure with the help of the Silicon Valley elites, to avoid any controversy they feel could harm their bottom line.

The latest outrage of the “woke leftist mob” would seem to be the Orlando Hyatt Regency hosting a bunch of Trump supporting, America loving, right wing, conservative terrorists for the three-day Conservative Political Action Conference, known as CPAC.

In a clear demonstration of their twisted concept of liberal inclusion, the “woke leftist mob” wanted the Hyatt to refuse service to those wild eyed “insurrectionist’s” in red MAGA hats.

In spite of the much needed infusion of cash and the high seven figure positive economic impact the conference would have on the local economy, not to mention the fact that the company is private and can make their own business decisions, the “woke leftist mob” would have preferred that the Hyatt discriminate against people simply based on their political viewpoint.

Now, in today’s day and age you’d expect to find out the Hyatt would place “political correct wokeness” over common sense and profit and tell CPAC to take a hike. But you’d have been wrong. In fact Hyatt had the best response ever.

“We take pride in operating a highly inclusive environment and we believe that the facilitation of gatherings is a central element of what we do as a hospitality company. We believe in the right of individuals and organizations to peacefully express their views, independent of the degree to which the perspectives of those hosting meetings and events at our hotels align with ours. Our own values support a culture that is characterized by empathy, respect and diversity of opinions and backgrounds, and we strive to bring this to light through what we do and how we engage with those in our care.”

Well, what do you think about that? Hyatt Hotels responds to the discrimination demands of the cancel culture mobsters by explaining that Hyatt is a “highly inclusive environment” that believes in “the rights of individuals” regardless of differing views and perspectives, and therefore won’t be discriminating based on ideology. Exactly what the “woke leftist mob” pretends to espouse while being the exact opposite.

The emotionally fragile “woke leftist mob” then started spreading #boycottHyatt across social media to express their deep displeasure at the company refusing give in and discriminate based on political viewpoint.

Hyatt Regency Orlando had politely extended the big bulbous, hairy knuckled, middle finger to the “woke leftist mob” of hypocrites in hoodies and stood their ground. Hyatt demonstrated honest consistency in their claim of being inclusive, unlike the many other huge companies whose lip service isn’t anything more than virtue signaling bull shit.

The modern day leftist is nothing more than a spoiled child, threatening to throw a tantrum if he doesn’t get what he wants. Just like a brat holding his breath until his demands are met for candy when it’s almost dinner time, and rather give-in just to shut them up, the Hyatt Regency acted like the adult in the room and responded with that word all spoiled brats hate to hear; NO!

And for what it’s worth, the next time I need to get a room, I’ll gladly pick from the Hyatt Regency’s family of Destination Hotels over the competition.

My question is, what would these same people say if Hyatt refused to host an Antifa or BLM conference based on their political ideology and affiliations? Would they be OK with discriminating?

Woman Tears Up Woke Ads On Subway Car…THIS IS WHAT PUSHBACK LOOKS LIKE!