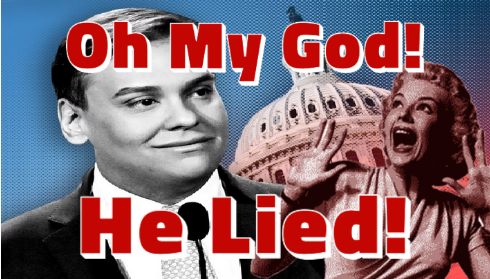 Rep. George Santos, the newly elected congresscreep from New York may be a big mouthed jerk, but why is it such a big deal that he’s also turned out to be a dirty, rotten, compulsive bullshitter? The same is true of Joe Biden, and he remains in good standing as the figurehead of the liberal establishment and the Democrat Party.

The obvious answer is the double standard of politics. By that I mean that Democrats are expected to be corrupt degenerates of no value, which is consistent with their well known corrupt, sick & degenerate ideology. But according to the lamestream media, Republicans have to be virtuous at all times, even if the liberals in that media make fun of them for that virtue.

Another answer is that some lies are just worse than others. For instance:

The Daily Beast uncovered that the New York Republican, who often remarked that he is openly gay on the campaign trail, officially ended a secret seven-year marriage to a woman in 2019.

It would seem that Santos is gay, but is he as gay as he wants you to believe? Is a gay guy considered a real gay guy if he’s just saying he’s gay to win an election? Wouldn’t that be stolen valor?

Now remember, stolen valor is perfectly fine with liberals, after all, they keep electing Richard Blumenthal to the Senate, regardless of falsely claiming to have served in Vietnam. But sucking up more sexual deviancy status than has been earned is where liberal Democrats draw the line! Santos having been married to a woman is a deep, dark secret beyond forgiveness as far as liberals are concerned.

There’s a lot of folks on both sides of the aisle demanding that Santos resign. Over what, lying? Since when is that a reason to resign anything, let alone an elected position? All politicians lie.

And who was harmed by his lies? Name one person who was hurt or caused pain and suffering because of claims about his ancestry, education, employment, charity work, property ownership and crimes he said he was the victim of……?

Here’s the way I see it, if the constituents of New York’s 3rd congressional district decide to demand a recall election, fine. But leave it up to them. It’s nobody else’s business. George Santos only has to answer to his voters.