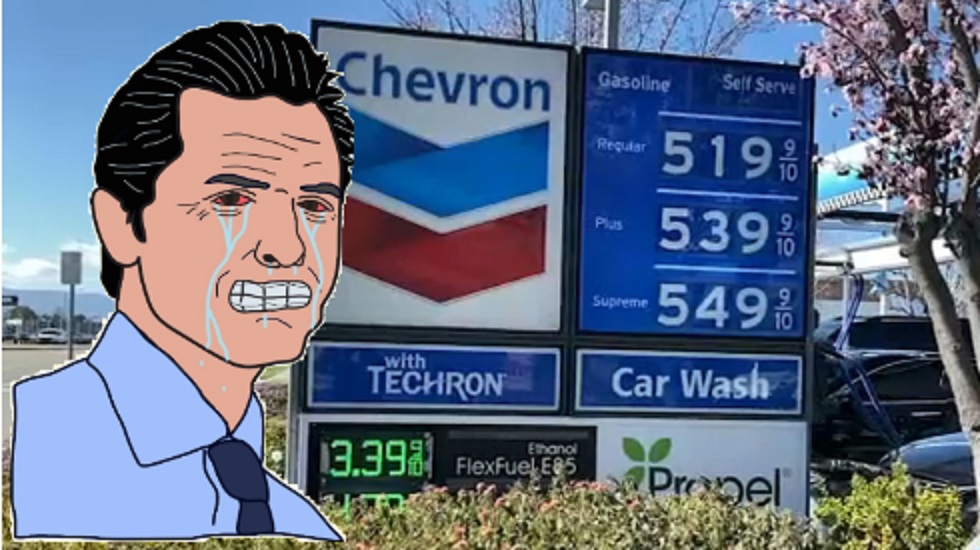 In 2012 the Democrat Party officially ended the two party system in California for state wide elections. They call it an open primary or “top two” primary election system. Basically the two top vote getters in all state office primary’s go on to the general. That means in almost every district in the state there are no Republicans on the ballot in the general election.

This is very important to the Democrat Party because it keeps Republicans and Independents off the ballot, thus reducing competition to their mission of preserving democracy. As a result of this corrupt election law Governor Newsom is free to push his destructive, radical agenda with zero opposition.

As it stands today, California already pays more for gasoline than other states and guess what? The price is about to go higher still because Gavin Newsom is just dying to inflict more pain and suffering on the population by installing financial penalties on oil companies who turn a profit. Essentially his plan is to punish oil companies and gas station owners for having been forced by the Democrat’s War on Energy to raise prices.

The proposal would make it illegal for oil companies to charge “excessive” profits. Companies found to be in violation of the proposal would be fined a civil penalty by the California Energy Commission.

The reason The Blaze is calling this a “fine” rather than a tax is that fines are easier to impose, requiring only a simple majority in the state legislature. However, it is in effect a tax and as you know, corporations don’t pay taxes, their customers do.

Gas prices in California are impacted by taxes and fees associated with environmental regulations that other states do not have, KTLA reported. In October, gas in the state was $2.60 more than the national average.

As I mentioned above, California consumers already pay the highest gas prices in the nation but Gavin Newsom’s thuggery is going to drive prices even higher still.

The Biden Regime has also attempted to blame energy companies for the high prices caused by Democrat policies and blame them for it.

You can have affordable energy or you can have liberal Democrat rule. You cannot have both.