Whose Fault is it Anyway? 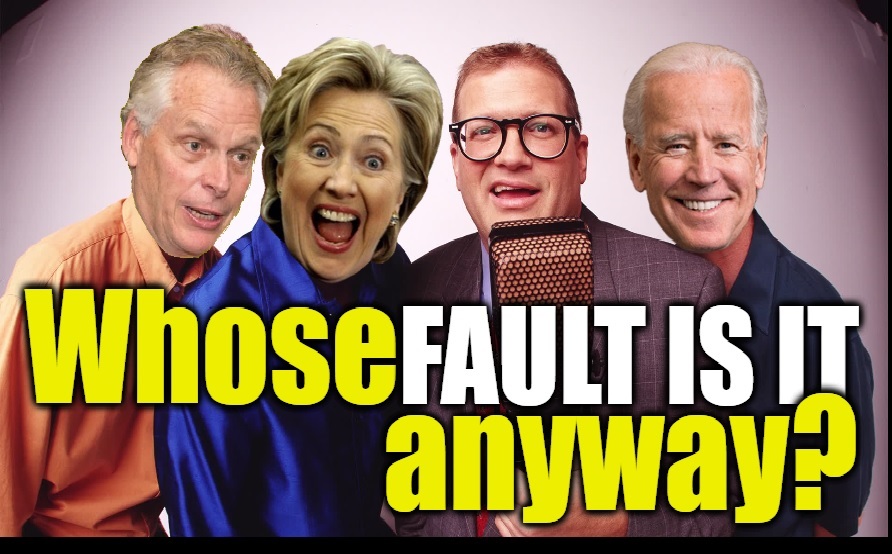 On Tuesday, with his epic defeat at the hands of an unknown Republican Virginia gubernatorial candidate Glenn Youngkin, Terry McAuliffe has failed at his last chance to remain relevant. But whose fault is it?

Democrats always rush to the nearest camera after as stunning a defeat as this one was to level the blame and make excuses. And today, is no different. It must be somebody’s fault, someone has to be thrown under the bus.

First off, it’s going to be Terrible Terry himself. Right out of the box the Democrats are going to first place blame on Terry McAuliffe himself for this giant fail. If you’ve been following politics for the last five minutes you must have seen that coming. They’ll be calling him the wrong candidate, not right for the times, they’ll say he was too old and white to excite the younger demographic, that he wasn’t “woke” enough to win. McAulliffe will be the scapegoat for failure of the Democrat Party’s policy’s with the people of Virginia and frankly the rest of the country as well. And that includes Independents and Democrats.

But beyond the obvious, and this may be a surprise to you, they’ll blame the Clinton’s, in particular Hillary.

After all McAuliffe first came to prominence as a part of the Clinton inner circle, and this loss will be viewed as further proof that the Clinton’s are politically all washed up. But as much as that may make you giddy with excitement, wait one minute, there’s much more at play here my friends.

The fact is, in an effort to absolve the Party of any responsibility, they may go so far as to say McAulliffe didn’t have enough name recognition to win, despite the fact that he was already Governor four years ago and before that was co-chairman of President Bill Clinton’s 1996 reelection campaign, he was also chairman of the Democratic National Committee from 2001 to 2005, and chairman of Hillary Clinton’s 2008 presidential campaign.

But hey, that was then, this is now right?

The lefty loons in the media will be suggesting the people of Virginia are obviously racists under the spell of Donald Trump. They’re just all a bunch of trans-phobic Deplorable Nazi’s, filled with hate and all that other crap they drone on about 24/7, but the Democrat Party itself will be the ones to throw poor old Terry under the bus and dismiss him as a relic of a bygone era, a fossil, a used up has-been.

They’ll probably even point out all the other losses by Clinton friends and family. There’s former Clinton chief of staff Erskine B. Bowles who lost Senate races in North Carolina in 2002 and 2004, former Labor secretary Robert Reich, who lost in the Massachusetts gubernatorial primary in 2002 and the late former attorney general Janet Reno, who ran for governor of Florida in 2002 but also lost in the primary.

Former Health and Human Services secretary Donna Shalala was elected to a Florida congressional seat in 2018, but then lost in 2020. Oh yes my friends, the Clinton legacy is mired in one political fail after another.

Only a handful of figures in Clinton’s inner circle and cabinet succeeded in their bids for office, and the ones who won often encountered scandals of their own that brought them down.

Bill Richardson won two terms as governor of New Mexico and was even under consideration to be Barack Obama’s Secretary of Commerce, but citing the distraction of a federal investigation into ties to a company that has done business with his state he took his name out of the hat. Rahm Emanuel was elected to the U.S. House of Representatives and had enjoyed two problematic terms as mayor of Chicago, and is President Biden’s nominee to be ambassador to Japan. And then there’s former Housing and Urban Development secretary Andrew Cuomo; and we all know the rest of that story.

Beyond Emanuel, the Clinton crew is pretty much missing from American policymaking. Bill and Hillary Clinton are nothing more than an afterthought in the modern 2021 Democratic Party and let’s not forget Hillary is the only person on the entire planet to ever to lose to Donald Trump in a general election.

Bill Clinton’s pant’s dropping escapades look irredeemable in the light of the “Me Too” movement. You may see Al Gore, Madeleine Albright, James Carville, and others from that era quoted here and there, but they’re largely in the retirement home of American politics. Monica Lewinsky turned 48 this past July and George Stephanopoulos is still an anchor at ABC News, but basically, the Clinton era of American politics is over, as outdated as Windows 95, the Macarena and the sound of dial-up Internet. Politics is like a shark, it has to move forward to survive and the Clinton’s are by and large a dead shark. So yeah, it’s the Clinton’s fault.

However, in the words of Ron Popeil, “But Wait, There’s More!”

What you’re not going to hear from the Democrat Party is the truth about why Terry McAuliffe went down in flames last night is that this vote was a solid rejection of everything your Grandfathers Democrat Party has become and most, not all but most of it can be summed up in one word, “Woke.” The American people have freaking had it up to here with wokeness and the cancel culture. We the people soundly reject anything and everything even remotely resembling wokeness. Last night we kicked some wokeness ass and then slammed it into the garbage with such force as to shake the earth enough to even wake Grandpa Gooeypants from his global warming summit golden slumber!

And not just wokeness, but every single policy perpetrated on the American people by these perverted, brain dead progressive, elitist maniacs in charge of our entire federal government.

Joe Biden’s approval numbers are under 45% in every single legitimate poll available and the policy’s of the Democrat Party is about as popular as canker sores and root canals and that’s what drove people away from Terry McAuliffe. It wasn’t the Clinton’s. It was a rejection of the Democrat Party’s policies. And in Virginia the number one issue on voters minds was education, and I don’t mean teachers unions, I’m talking the students and parental rights! Duh!

The Democrat Party will never understand or admit this, but the election was officially lost to Glen Youngkin when during a debate Terry McAuliffe suggested that parents should have no input whatsoever in the education of their own children. McAuliffe believes that’s the governments job. Parents can butt out according to him. Besides parents are nothing but domestic terrorists as far as the Democrats are concerned.

Folks, that gaff was the most massive misstep of any politician in recent American history. And on top of that, when asked for clarification? He doubles down on it? Yes he did, this idiot McAuliffe actually defended his comment at that debate, in which he said, “I don’t think parents should be telling schools what they should teach.” Holy Crap!

When he was on Meet The Press, Chuck Todd him asked about parents objecting to inappropriate and politicized books and materials, some of them outright pornographic, “This is about informing parents that a book may have some material not all parents would be crazy about, is that out of bounds?,” Todd asked.

“If you look at what the bill would be — ultimately it would’ve led to books being removed from our classrooms.” said McAuliffe, “And everybody clapped when I said it.” WTF?

And you mean to tell me that Terry McAuliffe and the entire Democrat Party didn’t see this coming? Frankly that should tell you everything you need to know about how over the top tyrannical, out of touch and tone deaf the Democrat Party really is.

When he said that parents shouldn’t be involved in their children’s school curriculum the race was over right then and there. Glen Youngkin was, at that very moment the winner. Period.

How anybody could possibly miss the fact that McAuliffe’s apparent endorsement of the Vladimir Lenin, Marxist philosophy on education got under the peoples skin, like some flesh eating bacteria is beyond the pale.

Then there’s the huge unpopularity of Joe Biden himself. Not to mention Biden’s open border or his onerous tax plans, disastrous energy policy’s & global warming bull crap. The Covid mask/vaccine mandates, proposed banking regulations, affordable spending plans, or any number of the other Party policies and government overreach that has hugely negative effects on freedom, liberty and we the peoples pocket book.

Understand that when I refer to the large “P” Party, I’m not referring to the television talking heads on CNN & MSNBC or all of the little obedient yet useful idiots who are in charge of the mind numbing marketing & messaging from the Party. I’m talking about the elites who write the policy, raise the money & pull the strings at the very top. The media, and the rest of the propagandists & “Yes Men” that carry the water will be the ones doubling down on race, gender and the wokeness nonsense. Those are the brain dead liberal ideologues who push the leftist theory of the new and improved Democrat Party of 2021.

The power brokers at the top of the political food chain are not really ideological at all, just corrupt to the core & to them it’s all about the money & the power they wield. And that crosses both party’s. They’d all sell their own mothers into white slavery for another twenty billion dollar military contract with Lockheed or Raytheon.

These un-elected inhabitants of our nations star chambers are the very definition of the “deep state.” And regardless of who wins a gubernatorial election in Virginia or New Jersey those people remain in charge, regardless of who wins any election they still pull the strings on the dancing puppets in elected office. Which is why we need to get past the next two years as cleanly and efficiently as possible in order to bring Donald Trump, or someone just like him back to finish the job of draining that damned swamp.

Editors Note: The Left is going to continue with the same woke bullshit that has lost them nearly every election this year. Now is NOT the time to rest on our laurels. The game is still in progress and this battle has only just begun. Please keep doing what you’re doing. The Democrat’s have fumbled the ball on the ten yard line, we picked it up and ran for the touchdown! Keep up the fight that ball to the end zone and punch it in for the score. And do it every chance you get! Make them feel the pain of November 2nd 2021 every day for next 12 months. Remember, like football, politics is a game of inches, every victory is significant and the size of that victory is insignificant. It could be the difference between winning or losing our country. Work your local elections, get involved, run for office and above all else keep spreading the word of our movement. We’ve got the momentum, if we don’t use it, we’ll loose it. God Bless America and Death to the New World Order.