The Taliban Puts Our Helicopters to Use 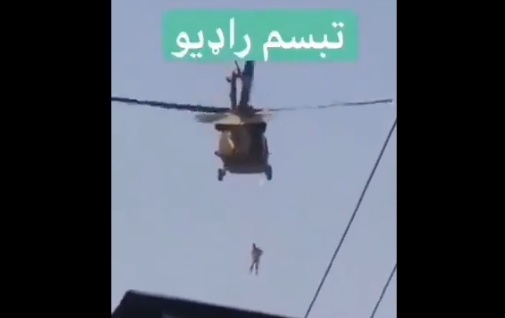 Among the $85 billion worth of US military equipment Joe Biden and the Democrats turned over to our Taliban enemies were dozens of helicopters.

And it looks as if terrorist savages have found at least one use for these sophisticated and extravagantly expensive aircraft that Americans might never have thought of. For example, here’s how they use a $6 million Blackhawk according to the Daily Mail….

A video shared online appears to show Taliban forces flying a $6million US Black Hawk helicopter over Kandahar to patrol the city.

The footage was shared on Twitter by an account called Talib Times which claims to be the official news source for the Islamic Emirate Afghanistan.

The unverified footage shows a man hanging from a helicopter as it flies over Kandahar ahead of the US’s exit from Afghanistan.

The man hanging from the helicopter could very well be one of the many Americans Joe Biden and the Democrats left behind.

Brandon Is At It Again