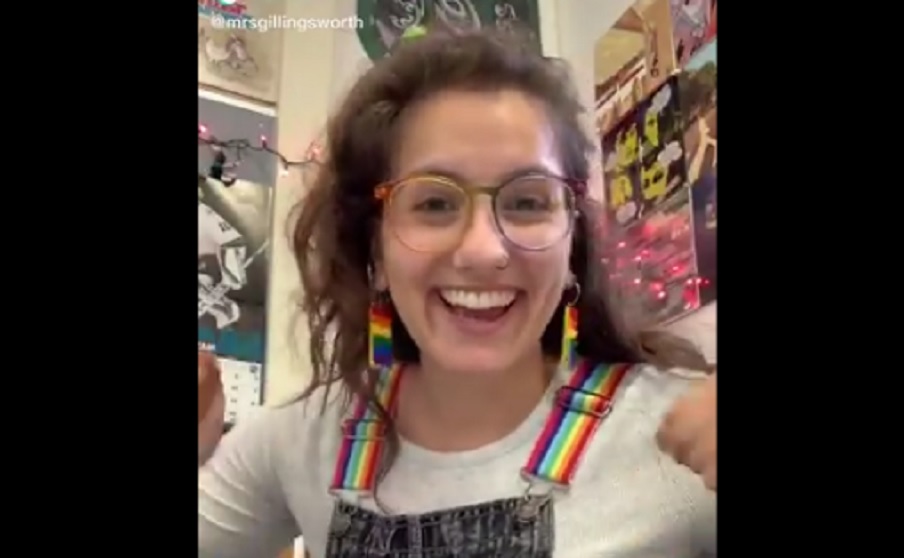 A woman who identifies as a public school teacher seems “super excited” about how she removed the American flag from her classroom and then forced her young students to pledge allegiance to the Gay Pride flag. In fact she’s so excited she posted her story on social media.

This maniac posted a video to TikTok admitting that she intentionally removed the American flag from her taxpayer-funded classroom.

“I took it down during COVID because it made me uncomfortable. I packed it away and don’t know where and I can’t find it yet,” the woman said.

So here you go, just yet another example of how radical leftists have turned our classrooms into propaganda internment camps for your children.

The teacher said students are required throughout the school to take part in the pledge every day.

One student pointed out that there was no flag to pledge allegiance to in the classroom.

“I tell this kid we do have a flag in the class that you can pledge allegiance to,” the giddy, giggling teacher said, pointing at the Gay Pride flag.

As you can see in the video below, this woman is very proud of her actions, in fact she’s so excited about tricking her students she can barely contain herself.

In a separate TikTok posting the unidentified teacher, decked out in rainbow colors, reciting, “I pledge allegiance to the queers.”

While she obviously thinks of herself as “super cute”, I think most people will find her “super nauseating”.

For some reason her TikTok account is now private, but not before we at The Deplorable Patriot were able to download these videos to share with our readers.

People often ask me why our nation’s values and our culture has changed so quickly over the last few years. It’s simple – the left has taken over our public education system and they are churning out generations of anti-American socialists radicals exactly the same way other communists in places like China and the USSR have done throughout history. Don’t let them do this to your kids!

You need to get your kids and grand-kids out of these public schools. Home-school or private school – that’s the only way to save our nation.

UPDATE: District spokeswoman Annette Franco declined to identify the teacher when reached early Monday by The Post. The teacher has been identified by Fox News as Kristin Pitzen. The Newport Mesa School District told Fox News on Saturday that the incident is under investigation, but could not provide more details as it does not “discuss employee related matters.”