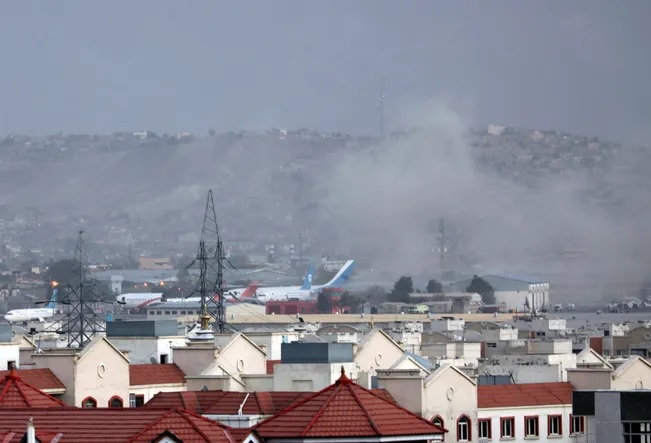 The Democrat Party impeached Donald Trump over a phone call to the Ukrainian president. Today ISIS killed four U.S. Marines and wounded three others in a terror attack at the Kabul Airport as the botched Joe Biden withdrawal was winding down. Dozens of civilians are also dead and wounded.

The U.S. ambassador in Kabul has told staff there that four U.S. Marines were killed in an explosion at the city’s airport and three wounded, a U.S. official with knowledge of the briefing said. Two explosions ripped through crowds of Afghans trying to enter the airport on Thursday.

At least three U.S. troops were injured, a U.S. official said. Witnesses reported multiple fatalities among the Afghans, many of whom were trying to enter the airport because they had assisted U.S.-led coalition efforts and feared persecution by the Taliban.

Western governments have repeatedly warned of an imminent attack by Islamic State and urged their citizens not to approach the airport. After the blasts, the U.S. Embassy told all Americans to leave the entrances to the airport immediately.

The explosion at the Abbey Gate of the airport was the result of a complex attack, Pentagon press secretary John Kirby said. He said another blast occurred near the Baron hotel adjacent to the airport. A British security official said both attacks were carried out by suicide bombers.

Joe Biden now has another choice to make. He said there would be severe consequences for attacks on U.S. troops. What will he do about it? My guess is he’ll claim he was talking about the Taliban, not ISIS.

Just four days ago a reporter asks Joe: “What about ISIS and the threat that Americans face now?” Biden just walks away.

Joe Biden has American blood on his hands. What will happen now?