Another Payoff for the Biden’s 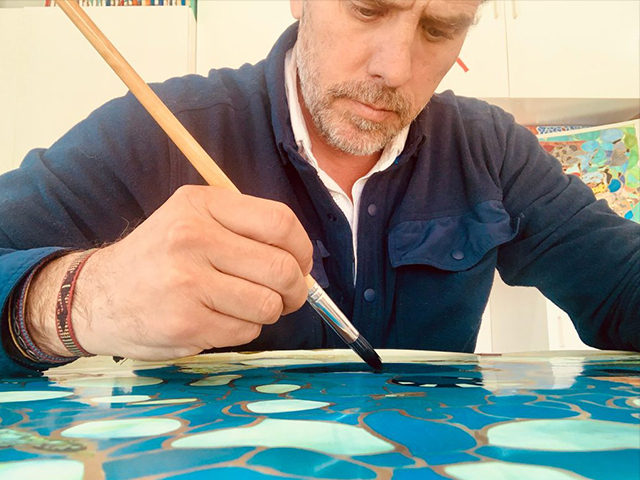 Breitbart news just reported that Hunter Biden is going to sell his art. Oh and the crazy thing is he is supposedly going to get a half million for his first piece. Below is the article by Hannah Bleau.

President Joe Biden’s scandal-plagued son Hunter Biden is reportedly now engaged as a “full-time artist” and is working with Soho art dealer Georges Bergès to hold an exhibition in New York in the coming months, with prices for Hunter’s art work ranging from $75,000 to $500,000, according to Artnet.

Amid years of scandal, the 51-year-old Hunter Biden is apparently now “laying low” in his Los Angeles home while working on his artwork. Bergès, his dealer, plans to host a “private viewing for Biden in Los Angeles this fall, followed by an exhibition in New York.” Bergès told Artnet that prices for Hunter’s work will “range from $75,000 for works on paper to $500,000 for large-scale paintings.”

“I don’t paint from emotion or feeling, which I think are both very ephemeral,” Biden said of his work. “For me, painting is much more about kind of trying to bring forth what is, I think, the universal truth.”

According to the New York Post, Bergès has some ties to China. The art dealer reportedly “regularly features works by Chinese artists and told a Chinese network that he was keen to open other art galleries in Beijing and Shanghai in 2015.”

Bergès has lavished praise on China’s role in the art world. In 2014, Bergès told the Chinese state-owned media outlet China Daily, “The questions that I always had was how’s China changing the world in terms of art and culture.”

Hunter Biden’s newfound venture does little to distract from the ongoing concerns that he could perhaps be trading on his family name, as he and other members of the Biden family have been accused of doing in the past.

Hunter’s entry into the art world follows years of his endeavors in the world of international finance where he has been criticized for engaging in business ventures with countries at a time when his then-vice president father was negotiating U.S. foreign policy with those countries. One of the most well-known examples of this centers around Hunter’s involvement on the board of Burisma, a Ukrainian oligarch-owned oil and gas company, which paid him tens of thousands of dollars per month despite his lack of experience in the energy sector or Ukraine in general. At the time, Hunter’s then-vice president father was the point-person negotiating U.S. policy with Ukraine. After leaving office, Joe Biden later bragged about how he threatened to withhold U.S. assistance to Ukraine unless Ukrainian officials fired a prosecutor who had launched a corruption investigation into the company that had hired Hunter.

Hunter also came under criticism for his lucrative business dealings with state-owned entities in China, as Breitbart News senior contributor and Secret Empires author Peter Schweizer has reported in detail.

“In China, [Hunter] travels with his father in December [2013] aboard Air Force Two. While his father is meeting with Chinese officials, Hunter Biden is doing we don’t know what. But the evidence becomes clear because ten days after they return to Washington, his small boutique investment firm, Rosemont Seneca, gets a $1 billion deal,” the Government Accountability Institute (GAI) president explained during a 2019 appearance with Sean Hannity.

“That’s $1 billion with a ‘B,’ later expanded to $1.5 billion. And that deal is with the Chinese government,” he explained. “It’s a deal that nobody else has in China. Goldman Sachs, Bank of America, Deutsche Bank, nobody.”

Schweizer suspects Hunter’s latest venture could potentially be another form of pay-for-play for the Biden family.

“Hunter Biden was repeatedly hired and given deals by foreign entities that he was clearly not qualified for in the hopes of getting favors from his father,” Schweizer told Breitbart News. “It is not a stretch to believe that foreign entities will pay for or commission his works of art at inflated prices to do the same.”

Money laundering in the art world has been identified as an issue, as detailed by a bipartisan Senate investigation last year:

The Senate report details how a pair of Russian oligarchs with ties to Russian President Vladimir Putin allegedly seized on the secrecy of the art industry to evade sanctions by making more than $18 million in high-value art purchases.

“This is just the tip of the iceberg,” investigators for the Permanent Subcommittee on Investigations told reporters on a call. The art world is considered to be the largest legal unregulated industry in the United States, according to the Senate investigation.

The Rotenberg example and many other investigation details highlight the fact that, unlike selling stock or making routine bank transfers, art sales through auction houses are not subject to anti-money laundering provisions in the Bank Secrecy Act. When art is sold, according to the report, sellers are not required to confirm the identity of the buyer nor to make sure the artwork isn’t being used to launder dirty money.

“Secrecy, anonymity, and a lack of regulation create an environment ripe for laundering money and evading sanctions,” the Senate report found.

Meanwhile, Hunter Biden, explaining his art, told Artnet, “The universal truth is that everything is connected and that there’s something that goes far beyond what is our five senses and that connects us all.”

“The thing that really fascinates me is the connection between the macro and the micro, and how these patterns repeat themselves over and over,” he added, explaining that art is “not a tool that I use to be able to, in any way, cope.” Rather, Biden said it “comes from a much deeper place.”

Bergès has praised Hunter’s work, as it holds an “authenticity” that he “personally” loves.

“A lot of the issues that are thrown at Hunter is what makes him produce really great work,” the art dealer said.

This Stinks Of A Pay Off

Accidentally On Purpose To Distract

Boebert: Omar Hung Up After Asking for Apology for Anti-Semitic Rhetoric