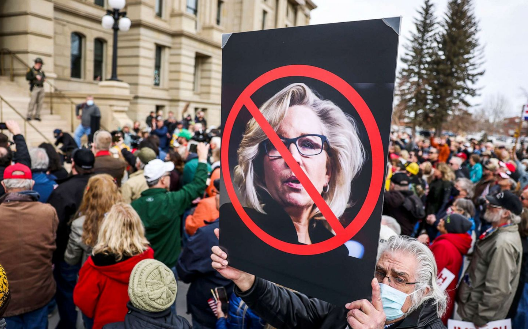 Rep. Liz Cheney (R-WY) made headlines when she announced that she was considering a presidential run in 2024. After she told the New York Post that she was “not ruling anything in or out” after being asked about her presidential aspirations, she elicited a reaction that reverberated through Washington.

The lawmaker became a more prominent political figure when she sought the favor of the left by joining the chorus of individuals pretending former President Donald Trump incited the Jan. 6 riots at the U.S. Capitol building. In fact, her aggressive anti-Trump stance has been her only defining feature, having been largely ignored throughout her tenure in office.

Republican voters seem hesitant to support a potential Cheney nomination for the presidency. In a recent poll, 58% of conservative voters indicated they would rather take a ten-minute bath in a vat of battery acid than vote for Cheney. Others preferred other alternatives with 23% stating they would rather commit Japanese ritual suicide. Still, another 15% preferred being shot in the face 20 times with a quail hunting gun.

Of course, the results of the survey were not all negative. About four percent of Republican voters stated they would support Rep. Cheney if she promises to escalate the carpet bombing of Middle Easterners.

While Cheney is not taking any options off the table when it comes to her political career, it seems that the representative might not be receiving good advice when it comes to considering a presidential run. Republican strategists have intimated that the people advising Cheney appear to be similar to the friends of those people who are rejected in the early stages of American Idol; they can’t bring themselves to tell her the truth: There is no way that Republican voters would ever nominate her to represent them in the next presidential race.

But there is a silver lining for the lawmaker. When she is voted out of office in 2022, there will likely be a place for her at the Lincoln Project with the rest of the washed-up neocons.

Author: Jeff Charles is a freelance writer, political commentator, and contributor for RedState.com. He co-hosts the Red + Black Show. He is also the founder and host of the “A Fresh Perspective” podcast. Jeff has appeared on “I’m Right” with Jesse Kelly, Russia Today, and Fox Soul. He resides in Austin, TX, and enjoys binging TV shows, reading history, cool hats, and all things nerdy.

Iceland Trolls The SH$T Out Of Facebook/META