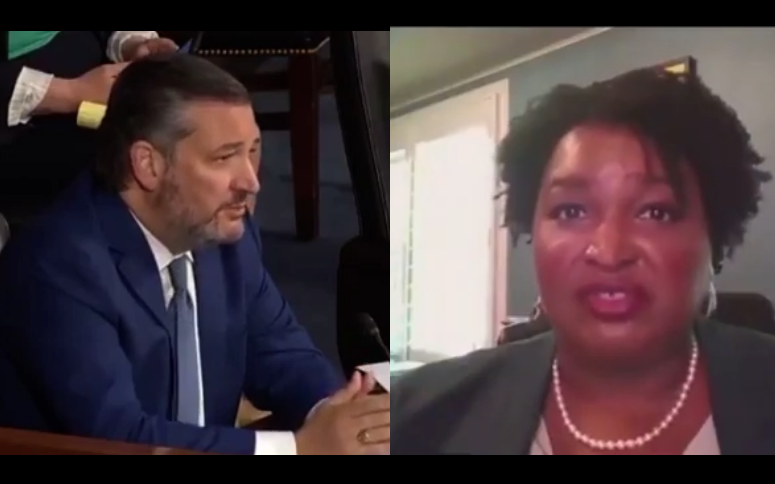 Ted Cruz drove a Mac truck of truth all over poor Stacey Abrams during a Senate Hearing and she deserved it!.

It happened on Tuesday when Abrams appeared before Congress to discuss “voting rights.” And by “voting rights” we actually mean Dems twisting and turning the rules so they can cheat to win.

Well, enough is enough, so Ted Cruz decided it was time to put Stacey in the hot seat. Cruz kicked things off by asking Abrams if she was still claiming that the GA governor’s election had been stolen from her?

Of course she still thinks it was stolen –  but she spun her response into a whole web of nonsense about the election being actually “stolen” from the voters.

Abrams said,  “We do not know what they would have done because not every eligible Georgian was permitted to participate fully in the election.”

This is the same lie she’s been repeating since she lost in 2018, and there’s zero proof to back up her claims. And Ted was not letting her get away with that fake outrage again.

So Cruz wound up and dropped a giant truth bomb on Stacey’s head – specifically over Stacey’s Claims about “black voters.’

He explained that her argument about the suppression of black voters was wrong because the turnout of black voters – as a percentage of the population – was actually higher than the national average in 2018. Whoops.

Ted went on to explain that Georgia had the highest registration and the highest turnout, despite Abram’s claims that the election was supposedly “stolen” due to this mysterious voter suppression. Well done, Ted.

Atta boy, Ted. It’s about time someone shut this woman up with some hard, cold facts.