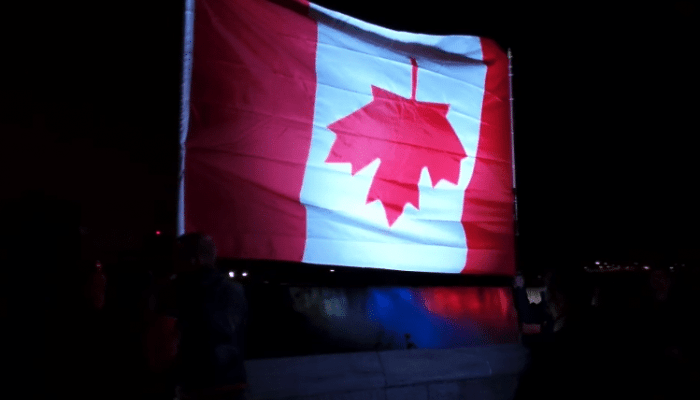 One Canadian citizen shared a video asking Americans for help: “We are asking for help. We are hostages in our province now.”

by travis 10 hours ago

The world is a terrifying place right now.

The coronavirus has been weaponized to control people.

Look across the northern border to our neighbors in Canada.

They flew an upside down Canadian flag and used lights to signal “SOS” via Morse code across the border to the US.

One Canadian citizen in a viral video explained: Follow on Telegram @WeLoveTrumpNoah

“We are asking for help. We Are Hostages in our province now. We are no longer free to do whatever we want as our Charter allows us.”

At the end of the video, the man adds:

“The price of freedom is eternal vigilance.”

The man in the video says the police in Canada are not “upholding their oath to protect and defend our fundamental rights and freedoms, so we are letting our neighbour know about it.”

Recently, the Ontario government announced an extension of the stay-at-home order and strict new health measures.

On April 16, the government of Ontario initially announced strict new measures which included new provincial police powers, all outdoor gatherings with people outside your household will be banned, playgrounds closed, nearly all outdoor recreational activities to be restricted, places of worship, funerals and weddings will have a capacity limit of 10 people, non-essential construction will be halted, border-checks will be introduced at the Quebec and Manitoba borders, essential retail locations will be limited to 25% capacity, among many other new restrictions.

Initially, the government of Ontario said that police would be given the authority to ask anyone outside or in a car why they are not at home for the mandated stay-at-home order and the police may ask for their address.

However, after fierce criticism of the new rules, some rules were amended on Saturday, April 17.

Now, police will only be able to stop an individual who they have reason to believe are attending an organized public event or social gathering.

Additionally, rules ordering the closure of playgrounds are going to be amended to keep playgrounds open. However, as of now other recreational activities and facilities will remain closed.

Canadians in Niagra asking the US for help from their tyrannical government.