Time to Get Government Off Our Lawns 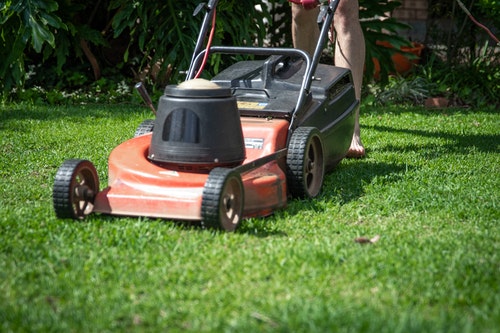 It’s spring, and for many Americans that means it’s time to drag out the mower and trimmer, invest in various seeds, feeds, pesticides, etc., and quite possibly put the water bill on steroids with daily sprinkler operation. According to the American Time Use Survey, the average American spends 70 hours — nearly two full work weeks — on lawn maintenance every year.

The lawn is such a familiar part of everyday American life that it might seem like the natural state of things.  In reality, it’s evolved over the last two centuries from an aristocratic plaything to what Washington Post columnist Christopher Ingraham rightly calls a “soul-crushing timesuck” that most of us would be better off without.

More to the point, the lawn is effectively a regressive tax scheme that benefits the sellers of expensive equipment and  those who use that equipment in our stead if we can afford to hire them.

Lawns originated with the European nobility of the late Middle Ages — people who owned plenty of land and could afford staff (assisted by large herds of sheep) to keep the grass cut short. By the 18th century, lawns were places for snobbish parties and social games such as croquet and tennis.

The first lawnmowers appeared in the 1830s, and over the next century, culminating with the introduction of “affordable” gas-powered push mowers, lawns became increasingly popular with “lower-class” imitators of the rich.

But until after World War 2, most of us regular people, even if we had houses, still didn’t have “lawns.” We had “yards.” Yards were generally smaller, and were more likely to be bare dirt or vegetable garden than carefully manicured grass of a single species.

Yards became lawns as they got bigger and as they became situated in the post-war cookie-cutter housing developments where developers or homeowner associations promoted property-value-preserving uniformity. You had to have a “lawn” of St. Augustine grass kept to no more than three inches in height for the same reason you couldn’t paint your house pink or put your old Chevy up on blocks in the driveway.

Local governments, seeing an irresistible opportunity to pass new ordinances, took their cue from the developers and HOAs and joyfully added lawn care to their already endless excuses for levying fines on the neglectful and recalcitrant.

The ill effects go beyond lost time, wasted money, and forced dealings with nosy bureaucrats. In addition to reduced biodiversity (exacerbated by ordinances dictating a few types of acceptable lawn vegetation) and the use of millions of pounds of unnecessary pesticides every year, Ted Steinberg tells us in American Green: The Obsessive Quest for the Perfect Lawn, our palsied hands spill 17 million gallons of gas — half again as much as the Exxon Valdez vomited onto Alaska’s coastline in 1989 — every year while refueling lawn maintenance equipment.

Xeriscaping, ornamental and vegetable gardening, etc. are increasingly popular alternative approaches to yard use. But for those of us who really want to be done with lawns, an important first step is getting governments off of them.

Author: Thomas L. Knapp writes op-eds at the William Lloyd Garrison Center for Libertarian Advocacy Journalism and publishes Rational Review News Digest, a daily news and commentary link roundup for the freedom movement. His past roles include managing editor at the Henry Hazlitt Foundation and media coordinator/senior editor at the Center for a Stateless Society. He lives with his radical libertarian spouse and children in Gainesville, Florida.