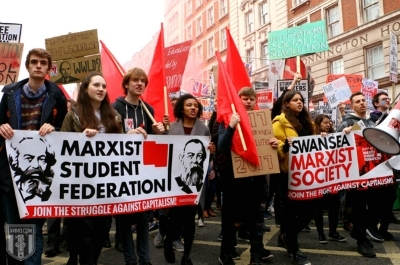 Earlier this summer, a survey posted on Twitter posed this question: “If you were dropped 2,000 years back in time with nothing but the knowledge you have now, what would you do?”

A man named Timothy Snediker replied as follows: “Easy. I would find and assassinate Jesus of Nazareth. Theologically speaking, it would be really important to get him before his calling and ministry begins, so that gives me roughly a decade to make it to Palestine, locate the man and make my move.”

Shocking, isn’t it? It should be to any decent person, regardless of faith. You’re wondering, “Who is this Snediker guy? A prison inmate? A mental patient? A Satan worshiper?”

He’s actually a teaching assistant at the University of California-Santa Barbara, pursuing his doctorate in religious studies. If he had suggested the murder of Mohammed or Martin Luther King, you can bet he would be looking for work and none of us would care if he never found any. But he is ensconced at progressive UC-Santa Barbara, where a socialist religion teacher can advocate killing the most perfect man who ever lived and likely still land tenure.

It would not surprise me if some of this character’s students will soon be burning down businesses and police precincts, claiming simultaneously that certain lives matter, but not all. Ideas have consequences.

Is this just an isolated example of extremism, untypical of academia today? I wish it were.

The violent rhetoric, the “woke” lunacy, the madness of “political correctness,” the attempts to shut down dissenting views, the “safe space” snowflake nonsense – all of it is coming from the socialist Left. Have you ever heard of moderates, conservatives or libertarians trying to silence a speaker, burn down a building or deface a monument?

Jonathan Turley, prominent George Washington University law professor, recently lamented the leftist bullying on campuses. “I wish I could say that my view (pro-free speech) remains strongly implanted in our higher educational institutions,” he said. “However, you are more likely to find public supporters for restricting free speech than you are to find defenders of free speech principles on many campuses.”

One man who undoubtedly would be proud and flattered by such fringe lunacy is Karl Marx, the father of modern socialist theory. By “modern” I mean recent; socialism actually dates back to the first envious cave man who bashed his neighbor’s head in to make off with his turkey leg. Today, Marx and Marxism are all the rage in broad swaths of American academia – favorably presented to more young minds than at any time since the man himself was buried in the corner of London’s Highgate Cemetery in 1883.

Just two years ago, historian Paul Kengor noted that Carnegie-Mellon University in Pittsburgh even hosted a bicentennial celebration of Marx’s birth. Scholars praised him as if Marx’s virulent racism, his noxious anti-Semitism, his hateful scorn for people of faith, his ignorance of how markets work, his militant endorsement of mayhem and murder, his poetic exultation of Lucifer, and his poppycock forecasts of future events were irrelevant matters hardly worth mentioning.

I have interacted with tens of thousands of students as a professor or guest lecturer in many high schools, colleges and universities. When I mention these important, distasteful aspects of Marx and his view of the world, the standard reaction goes something like this, “My teachers never told us that! Wasn’t Marx the guy who proved that capitalism was evil?”

No, Marx didn’t even come close to proving that. It was Marx himself who was evil, not capitalism. Which brings me to a book recommendation, a new one by the very Paul Kengor cited above. Titled The Devil and Karl Marx, it explains the context which produces contemptible screwballs in the classroom like Timothy Snediker. From the “critical race theory” that’s fast becoming mainstream in academia to nihilistic anti-Americanism to virtual worship of the State – this one man who mistreated his own family and elevated hate to a mantra, Karl Marx, is the fountainhead.

“Marxism from the outset was a seriously perverse ideology that brooded in misery, wallowed in misery, advanced itself in the name of misery, and ultimately produced misery,” writes Kengor. “It is no surprise that anyone who has studied its roots sees among them numerous pernicious ideas and influences.”

Millions of American students today are stewed in Marxist ideas, and we are financing it. We’re graduating legions of them who can tell you next to nothing about Adam Smith or Milton Friedman but can quote Karl Marx chapter and verse. That should chill you to the bone. If you’re worried about where this all might lead if unchecked, consider the famous admonition of the English poet John Donne, “Therefore, send not to know / For whom the bell tolls, / It tolls for thee.”

If America ends up in the socialist dumpster so tragically common in history, we can kiss our freedoms and well-being goodbye. Then someday an honest historian will write of us, “It wasn’t a foreign power that did them in. The foe was right under their noses. They paid for their own destruction with their tax and tuition dollars. And they thought it was education.”

Author: Lawrence W. Reed is president emeritus and Humphreys Family senior fellow at the Foundation for Economic Education in Atlanta, GA, and author of the recent book, Was Jesus a Socialist? His web site is www.lawrencewreed.com.