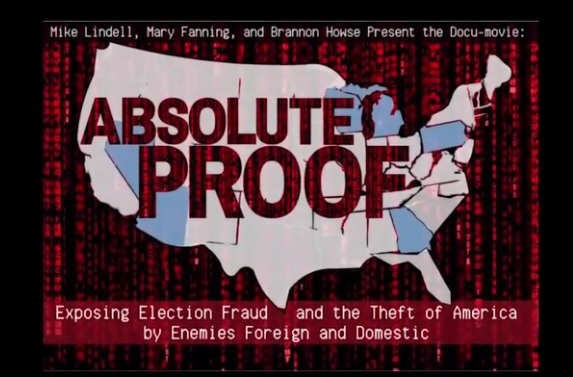 MyPillow CEO Mike Lindell has released “Absolute Proof,” his documentary explaining the fraud in the 2020 election. Lindell published it on Vimeo and YouTube, and published it to Facebook however it was removed from all those platforms almost immediately.

The Marxist/Progressive website and TV network VICE claims they were responsible for having it removed from YouTube and Vimeo.

As you may know, Newsmax has had a little dust up with Mr. Lindell recently over his claims to have Absolute Proof of massive voter fraud in the 2020 election, resulting in what can only be described as what should have been a career ending meltdown by host Bob Sellers.

So the question is why?

Why the insistence to keep you from seeing this movie and hearing the evidence? If everything is false, if everything Mike has gathered is in fact “misinformation” why not just let you see it and let you decide for yourself? Why won’t VICE, YouTube, Facebook and Newsmax produce their own documentary exposing the holes in Mr. Lindell’s theory?

What are they afraid of?

We at The Deplorable Patriot want you to see this film and make your own decision. Unlike the the sycophants of the oligarch rulers of the new World Order we believe in freedom of speech, thought and discussion.

EVIL IS POWERLESS WHEN THE GOOD ARE FEARLESS!

Watch the above embedded video for yourself and please share it.

View this movie on Rumble

View this movie on BitChute