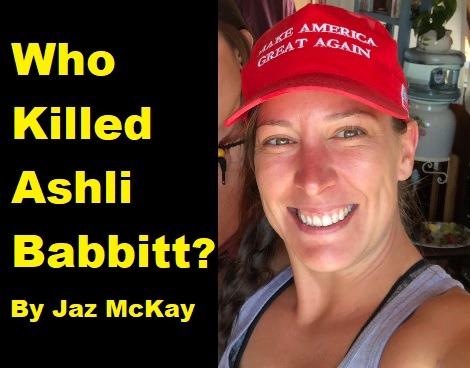 And why is his identity being treated as classified information?

The death of a Trump supporter, 35-year-old veteran of the US Armed Forces Ashli Babbitt, shot during the storming of the Capitol January 6th has all but vanished down the memory hole of the lame stream media. And in the days following the tragedy, when she was mentioned in news reports she was describe as a fanatical “invader” and a terrorist comparing her to the likes of Timothy McVeigh and Terry Nichols.

Leftist pundits, Never Trumper RINO’s and other media talking heads did their best to paint Ashli Babbitt as a Trump supporting rube at best, commenting that as a military vet, “she should have known better” or as a traitor to her country at worst, saying that if she were really a patriot, she wouldn’t have even been there or that as a participant in a riot, “she got the punishment she deserved.”

And if the murder of George Floyd by a policeman in Minneapolis last summer spawned a whole anti-Trump movement with mass rallies and riots throughout the country, then the reaction to the shooting of Babbitt has proven to be completely different.

Every single officer involved shooting over the past five years has seen the cop’s name & face plastered all over the media to call attention & try to shame police, but not this time, not the Capitol Police officer who shot Ashli Babbitt. Why? What’s different with this one?

According to the New York Post, an investigation into the death of Babbitt has been launched by the DOJ, however as of yet we have zero information on the officer who pulled the trigger. And unlike other officer involved shootings of the last 5 years, the lame stream media continues with the narrative that the police officer who shot her had no other choice.

That just seems odd to me given the way they routinely report on shootings of unarmed people by law enforcement. Suddenly the insinuations of the “trigger happy cop” just itching to shoot first and ask questions later have vanished from the pages of American newspapers.

As seen in the video posted on line, (here) & (here) a plainclothes Capitol Police officer fired almost point-blank range when the unarmed Trump supporter, in a crowd of protesters who smashed several windows, tried to get into a hallway from a stairwell inside the Capitol building.

Also it seems strange that there were clearly three other officers in the stairwell who at one point were blocking the protesters from entering the hallway. Then for some reason they moved aside as if to allow them entrance.

If you watch the video below you’ll also see four officers in riot gear coming up the stairs behind Ashli Babbitt and the protesters who then calmly turn and walk back down the stairs just moments before the fatal shot is fired.

So, if the situation was so dire that it required the plain clothes Capitol Police officer to draw his weapon and take the life of an unarmed woman why was it not seen equally as a clear and present danger by seven uniformed officers on the other side of the locked door in the same stairwell as Ashli Babbitt and the other protesters?

Maybe an investigation will answer these questions but then again maybe not. And why isn’t the lame stream media, who has a history of rushing to judgment before full investigations of other officer involved shootings asking the same questions we at The Deplorable Patriot are asking?

He was allegedly suspended from service for the duration of the investigation, but his name has not been released. And not a single journalist has even raised the question as to his identity, not even once.

Let’s be clear, the media knows the identity of the Capitol Police Lieutenant who killed Ashli Babbitt. They seem to know his identity though, as noted in this article from the British Newspaper The Daily Mail, but they still wont name him. Presumably this is to protect him from retaliation by radical mobs. That’s a courtesy never once offered to a local street cop who’s been involved in a similar situation in recent years.

“Why don’t we know yet who shot the unarmed girl in the Capitol?” people on the internet have been asking.

“Say her name,” the slogan used by the Black Lives Matter activists after Breonna Taylor’s death has been mysteriously missing in coverage of Babbitt’s slaying.

The hash tag “Justice for Ashli” was heavily trending in the days following the tragedy on the social media site Parler, that is until being silenced by the BIG TECH Robber Barons intent on silencing those who may have serious questions.

They justified the removal of the Parler platform from their servers by falsely accusing it of being complicit in the Capitol riot. However evidence shows Facebook and Twitter were also used to promote the event by factions within BLM and Antifa, in an effort to draw negative attention to the Trump supporting MAGA’s.

One such “activist”, John Sullivan of Utah was arrested for inciting the mêlée and then promptly released, only to be arrested again last week for violating his conditions of release. Seems he was threatening witnesses on line.

Regardless it would seem that the American people have more questions than any of the countless, so called, journalists whom you would imagine would be just a little bit curious. But that just doesn’t seem to be the case.

Which brings me back to my original questions, who killed Ashli Babbitt and why is his identity being treated as classified information by Washington D.C. officials and the media?

Sadly, we may never know the answer to either.