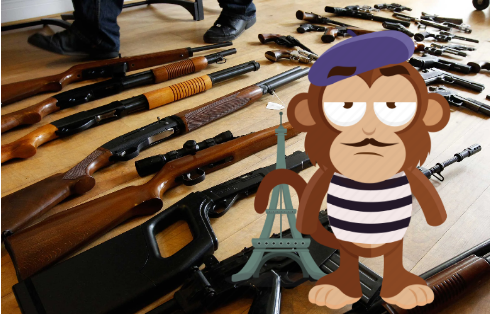 On September 3rd, 1939, France declared war on Germany after Germany’s invasion of Poland and began the small, limited Saar Offensive which quickly failed. By mid-October they withdrew and ran home to hide in their wine cellars. German armies then invaded Belgium, Luxembourg and the Netherlands on May 10, 1940 and swept into France with little to no resistance.

On June 22, 1940, the Second Armistice at Compiègne was signed by France and Germany, at that point it was over. In ten short months the Germans were instructing French citizens how to behave when their armies marched into Paris.

They also made it clear, the French must also surrender their firearms. In every occupied town, Nazi soldiers put up posters that demanded that civilians surrender their guns within twenty-four hours or else be killed on the spot.

I’m bringing you this little history lesson because it’s important to keep it in mind when looking into France’s future.

In 1940 despite the consequences, many French citizens refused to comply with the order and chose to keep their guns, many of them were executed by German soldiers. The French people had more guts than the French government, not anymore though.

Last month the French government began confiscating firearms from law abiding French citizens. What is surprising about it is the peoples eagerness to abide by the order:

French gun owners are surrendering their weapons in record numbers at police collection points across the country as a round up of unlicensed firearms winds down.

France is keen to limit the number of illegally owned firearms – as many as six million, authorities estimate – and the Macron government is offering an amnesty in an effort to limit their distribution.

According to the head the of the Interior Ministry’s Central Service for Arms and Explosives, Jean-Simon Merandat, “We believe there are about 5 or 6 million weapons that are being kept in an irregular manner by our fellow citizens. Eighty to ninety percent of these weapons are in their possession due to an inheritance.” The French don’t seem to be questioning why disarming them even of old heirloom weapons is such a huge priority for their government.

“This campaign is here to help French people surrender these objects that are rather cumbersome for most,” police commandant Florence Gavello said at the collection point in Nice.

The first priority for the Liberal World Order’s evil agenda to go forward, is to disarm the populous. The French, it seems are more than willing to comply.

Have they already forgotten what it was like when they were invaded by Germany in 1940? Do they know how many American men gave up their lives to pull their ass’ out of that brutal Nazi occupation? My guess is they have flushed that reality down the memory hole.

I guess most French people haven’t seen or don’t remember this 1940 photograph from the day the German Army rolled tanks through the streets of Paris:

Sadly there’s nothing unusual about any of this, after all the French have been surrendering for centuries. Americans, on the other hand do not. Will we give up our only serious form of self defense as easily as the Frogs? All I know is, I will not!