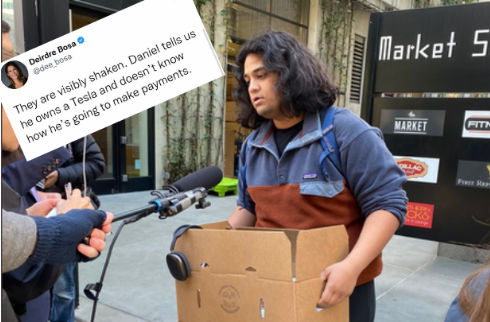 Liberal establishment journalists are idiots, eager to believe anything that reinforces their world view — so eager that they are just to easy to fool. These people aren’t journalists, they propagandists. All you have to do is tell them what they want to hear, and that is all you will need in the way of credentials:

This guy could be on the level, with his husband and wife, and his denunciation of “Nazis” who don’t want male perverts in women’s locker rooms. It is San Francisco, after all. But no, he was trolling — and he wasn’t alone:

Two pranksters carrying boxes near Twitter’s San Francisco building successfully fooled a number of members of the media at the HQ into believing they were Twitter engineers fired by Elon Musk.

The other guy gave his name as “Rahul Ligma.”

Reporters applied little scrutiny to the two men, one of which claimed she was named “Rahul Ligma,” which is a name that does not exist in Twitter’s Slack or email system. The name is obviously fake to those familiar with internet culture, as “Ligma” is a long-running internet joke/meme designed to elicit the response “ligma balls” from the people who are in on the joke.

These guys should be Twitter employees for real. Musk could hire them to handle media relations:

We already know that 99% of our news Broadcast or Print is Fake News and most all the Journalists are leftists who support the Democrats we saw how they worshiped Obama and kissed his rings.

IT’S OFFICIAL: The Lamestream Media Has No Credibility