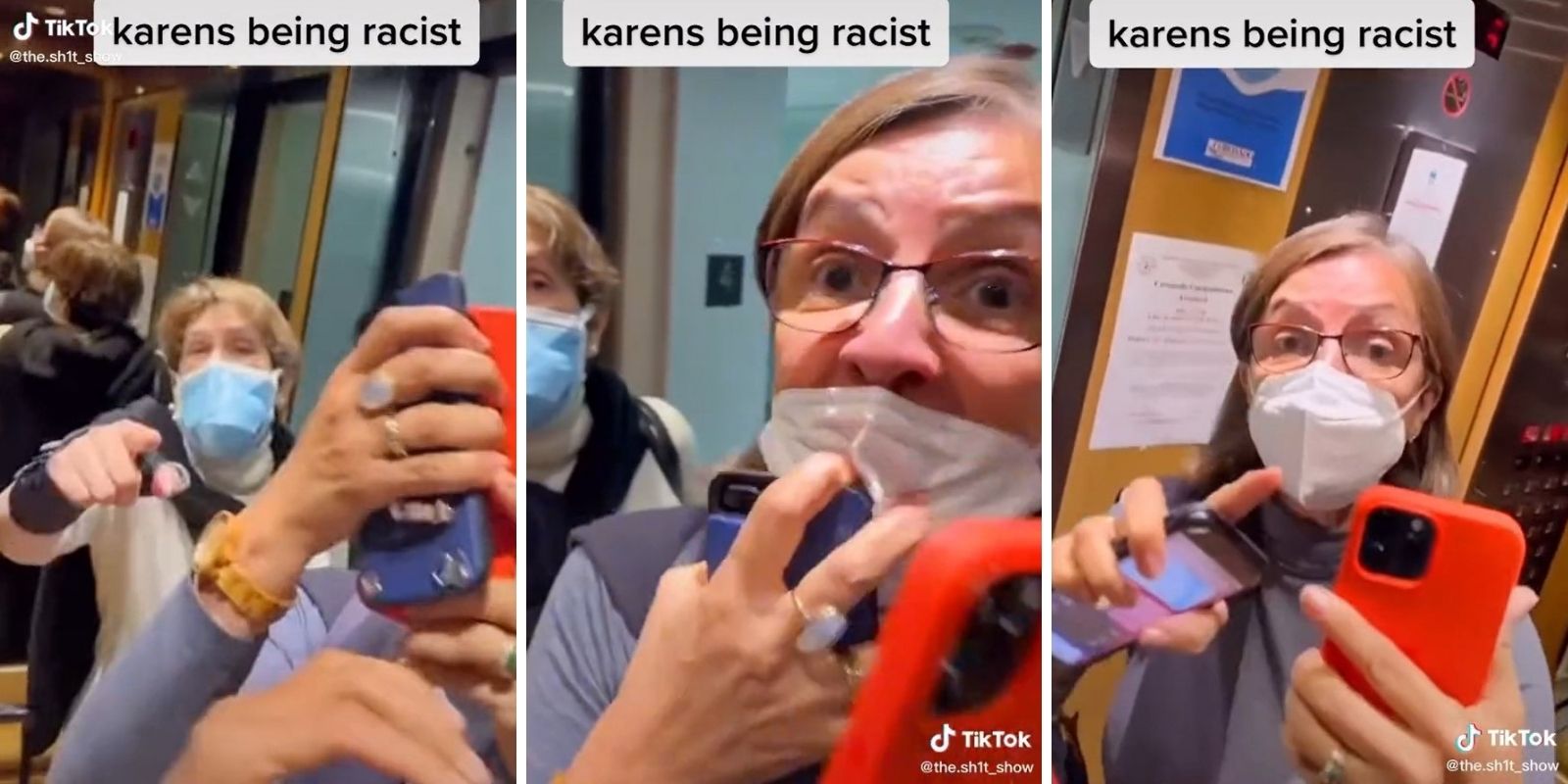 As the Karen-led citizen enforcement of masking-wearing intensifies in the third year of the pandemic, a viral clip shows older masked white women assaulting a black man for not wearing a face mask, while shouting, “Black Lives Matter!”

“More mask madness, this time in an elevator. The mask police are really nuts,” tweeted Twitter account Libs of TikTok, which posts clips from the popular video-sharing app that capture the insanity of mask-wearing, gender-bending liberals.

“Get out!” both sides yelled at each other in an elevator. “Do not touch me!” one of the “Karens” roared multiple times, before striking the man. “You just hit me!” the man exclaimed in response. “Did you just hit me?!” he repeated back.

To which, the woman chanted: “Black Lives Matter!” The other woman held the elevator door open, motioning towards the exit. “Get out!” she said again.

“Yo, this is racist,” the black man said. “Can you stop? Stop! Stop!…You need to stop. I’m not getting out!” he insisted during the 30-second incident.

Twitter replies were quick to point out that the hysterical attack filmed on social media in the tight enclosure also spotlights the hypocrisy of virtue-signalling liberals who tout support of the left-wing Black Lives Matter movement.

“White libs have lost the plot. What a weaponized propaganda machine that they chant this phrase while actually abusing a black man. It’s not a protective armor that negates personal responsibility to treat others with dignity,” remarked writer Jessica Vaugn whose tweet garnered over 1,000 likes on Twitter.

Make no mistake about it, people like these two old white women are not just insane, they’re the roots of the current Democrat Party. If you’ve ever wondered to yourself, “Who would vote for more of this nonsense in the 2022 election?” This is it. These two are at the core of the Party of Kennedy and FDR. The Democrats are no longer the party of the working class, the Blacks and other minorities or even the level headed social liberals.

The Democrat Party is the party of the insane white women, lunatics wearing three masks, with an “I Got My Covid Vaccine – We Can Do This” frame around their Facebook profile picture and stinking of hand sanitizer. They’re the virtue signalling, bored housewife looking for meaning in their pathetic, empty lives who’ll gladly drag everyone down their rabbit hole of mental illness if we give them the opportunity.

Never give them that opportunity, it’s past time to fight back. In fact if you notice these two maniacs both punched this guy, and frankly if that had happened to me, I’d have colecocked the two of them right in the snoot! You get violent with me, I will reciprocate, even against two old bitty’s on an elevator.

How We Look to the World