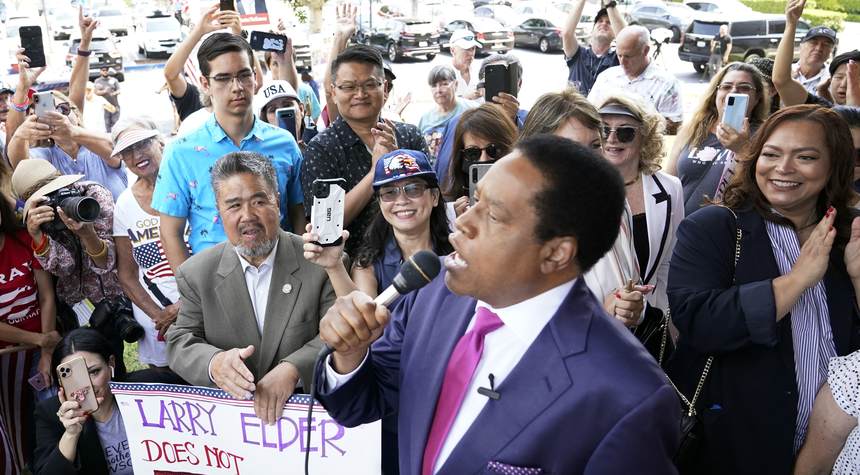 Since the left failed in their effort to paint radio talk show host and California gubernatorial candidate Larry Elder as a woman abuser, it seems they are going back to their usual tactic: Call him a white supremacist.

The Los Angeles Times’ Erika D. Smith wrote a piece almost a week ago in which she pretended Elder is somehow promoting white supremacy. As you might imagine, she received an outpouring of criticism for making such an ignorant argument, but like many of her fellow leftists, it appears she can dish it out, but she can’t take it.

Nearly a week ago, she wrote an article titled: “Larry Elder is the Black face of white supremacy. You’ve been warned.”

The content of the article was rather predictable. It was the typical “black people who disagree with the left are white supremacists” claptrap that leftists like Smith bloviate about whenever they find it too difficult to form coherent arguments against conservatives who happen to possess a certain level of melanin. Rather than coming up with actual points, they produce banal talking points which rely heavily on repeated allegations of racism and sometimes, racial epithets.

Apparently, Smith got quite a bit of criticism from people who didn’t exactly appreciate her hit piece, in which she quoted Melina Abdullah a leader of Black Lives Matters’ Los Angeles Chapter:

In fact, it appears the criticism was so terrible, Smith had to write a whole piece whining about it. In the follow-up article, titled: “Larry Elder says he’s not a face of white supremacy. His fans make it hard to believe,” Smith highlights some of the comments she received from readers after writing the original hit piece. She wrote:

“For a solid week, I’ve been getting hundreds of racist messages from Elder’s angry, mostly self-proclaimed white supporters. People who, in their attempts to defend one Black man, seem to have no problem resorting to anti-Black tropes to tear down not just me, but Black people en masse.”

“As a white man, here’s some knowledge. everything you have that makes your life comfortable was built by white men… blacks aren’t oppressed, you have the most privlage [well, “privilege”] to spew hatred everyday. white people have built civilization comfortable. yes certain people have been evil but to talk of supremacy as if blacks aren’t guilty of it themselves. every black country is 3rd world don’t tell me blacks would run anything better.”

“You clearly got to your position from affirmative action!! Not like Larry Elder, any black person who is successful and made something of himself without crying being a victim because of his race.”

“Stop blaming others and take responsibility for the sickening black culture in the inner cities. 95% of black men are killed by black men. 95% illiteracy rate. Teenage pregnancies and living a career off the welfare plantation.”

Lastly, one of the readers said:

“You want to keep black people on the Democrat plantation. How dare you. Larry Elder will be the emancipation proclamation to finally free the black community from the chains of Democrat rule.”

These were only some of the messages Smith included in her article. I won’t pretend most of these messages weren’t profoundly ignorant. Calling someone an affirmative action hire and repeating that asinine “plantation” rhetoric is absurd.

But something tells me that most of those who took exception to her article had more intelligent objections that she chose not to include in the piece. Indeed, the author acknowledges that “Elder has supporters of all races who wouldn’t think of stringing together such vile words.”

However, there was one individual who laid it out perfectly:

“Whenever a black person doesn’t agree with your warped world view and your opinions about the black community, you are always the first ones to start hurling racist insults.”

And this is the crux of the matter. In neither of her hit pieces did Smith give reasoned arguments attacking Elder’s policies. She didn’t explain why the gubernatorial candidate is wrong on the issues. She didn’t even lay out why Gov. Gavin Newsom deserves to keep his job. Instead, she went with the usual route which involves pretending that people who disagree with the left are white supremacists

There are plenty of issues on which I disagree with Larry Elder. But labeling him a white supremacist makes about as much sense as trusting the Lincoln Project’s John Weaver with one’s children. It is hyperbolic rhetoric designed to mask a lack of polemic ability.

This is a common tactic used by folks on the left – but there are plenty who are capable of having a reasoned debate. I’ve interacted with them. Unfortunately, it is the ones who use silly talking points like this who get the most attention.

Author: Jeff Charles is the host of “A Fresh Perspective” podcast and co-host of the Red + Black Show. Jeff is also a freelance writer and political contributor who has appeared on Fox Soul and the First TV Network. If you wish to reach out to him for tips on stories or just to yell at him, send an email to jeff@afreshperspectiveshow.com.

Coffee And Creamer Are Racist