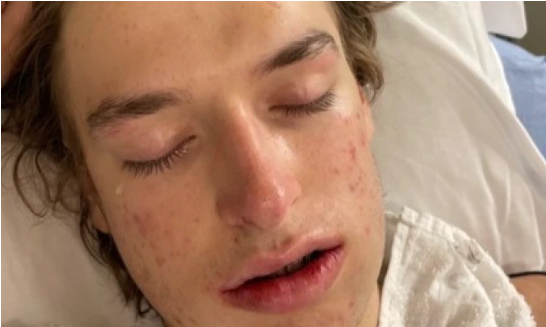 From Gwinnett County, Georgia comes a terrible story about a 17-year-old white basketball player who was brutally beaten by a gang of black athletes.

The entire attack was captured on video – which you can watch below. Nick Cox was slammed onto the basketball court. The video shows the boy being shoved into a corner where he was relentlessly pummeled.

Other players stood around and laughed while the helpless teen was being brutalized. Not a single person bothered to come to the boy’s rescue. Not a one.

“People actually applauded. I don’t understand that. I can’t even now understand it. I don’t know where the disconnect is with seeing someone get hurt and finding joy and humor. I can’t fathom that and it haunts me,” Allyssa Cox told television station WAGA.

The 17-year-old was left with a broken jaw, whiplash and a severe concussion.

The attack was so violent – Nick’s jaw was broken in three places and tore through the skin. He is facing multiple surgeries.

Only one of the players was arrested in the attack and he’s facing charges as a juvenile. And all of the boys are back in school.

That’s why Alyssa and James Cox are so angry. They say all of the attackers should be punished – even though the attack happened off campus.

“When he found out that the kids who did this to him were still able to go to school and play sports and live life as normal, that hit him pretty hard because his entire life has completely changed,” James said.

More than 20,000 people have signed a petition urging the school district to take action.

“I felt like we got a lot of lip service. I would sit with someone and tell them this story and would show them the video and they would say ‘oh that’s terrible. We’ll see what we can do’ and would do nothing,” Allyssa said.

Dare I say this – had the races been reversed – this story would have made national headlines.

What If Kyle Rittenhouse Were Black?