Skip to content
RECALL NEWSOM The Elites The Swamp 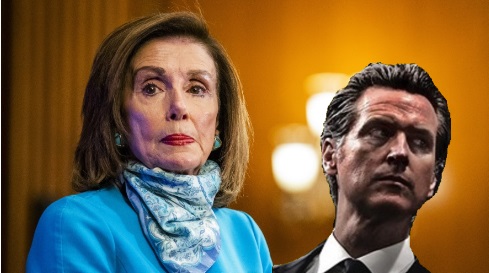 Speaker of the House & Gavin Newsom’s Aunt, Nancy Pelosi announced she has a secret plan to keep Gavin in power as California’s worst governor in the states history.

Speaking about the recall Pelosi said, “We respect it, but we do not like it, and we will defeat it,” Fox News reported. “I want everybody to get out the vote,” Pelosi continued. “I have my own operation working [to] defeat the recall of our governor.”

Sounds like Pelosi is going to pull some shenanigans and abuse her power to keep the Marxist Democrats in control of California.

Pelosi made another strange comment about the recall at a press conference for the Biden’s American Rescue Plan.

“He’s been a great governor, and I’d like to see this, shall we say, nuisance — but it’s part of what you can do, so we respect that — but we have to also get out the vote,” the hollow eyed ex-hippy, said. “Reject the recall. It’s not good for you. It’s not good for children and other living things,” quoting a poster published by the anti-war advocacy group, Another Mother for Peace founded in 1967

So what could her secret “operation” be called? Could it be, “Operation Dominion”?

If the dominion machines are used, then the fix may be in. That could be why Nancy doesn’t seem too worried, she already knows the outcome. Yeah, right now it may seem really close for appearance sake, but the totals may already have been decided. Face it after watching Mike Lindell it only proves the American people have been dooped for years. They use our ignorance of computers to cheat. Voting machines have to go period. This is why the turnout against Newsom is so vital to the recalls success.

But then there’s this, the Biden administration is coming to the rescue and is helping Newsom.

Last week, Joe Biden announced that he was endorsing Gavin Newsom despite the recall effort. This development could mean that Democrats are starting to worry about the real possibility that Newsom may get recalled as governor. Otherwise why bring out Grandpa?

Joe Biden resoundingly endorsed Gov. Gavin Newsom against a looming recall vote on Thursday, telegraphing that the White House could come to Newsom’s aid in the race’s critical final weeks.

The Biden administration had already gone on the record opposing the vote to oust Newsom. But Biden’s statement was on a different order of magnitude and came as the White House considers deploying Biden, Vice President Kamala Harris — or both — on Newsom’s behalf.

“Governor Newsom is leading California through unprecedented crises,” Biden said in a statement. “He is a key partner in fighting the pandemic and delivering economic relief to working families and helping us build our economy back better than ever. He’s taking on the climate crisis and standing up for the rights of women, immigrants, and the LGBTQ community. He knows how to get the job done because he’s been doing it. And to keep him on the job, registered California voters should vote no on the recall election by September 14 and keep California moving forward.”

A report from a source familiar with White House planning said both Biden and Harris intend to take an active role in the campaign’s homestretch. That could include in-person appearances and social media support. Considering their low polling numbers that could actually be very good news for the recall effort.

What Happened To Hannity?

Jan 4, 2022 TheChasbowie
The Covid Lie The Deep State The Elites

The War on a Virus Has Resulted in Colossal Failure