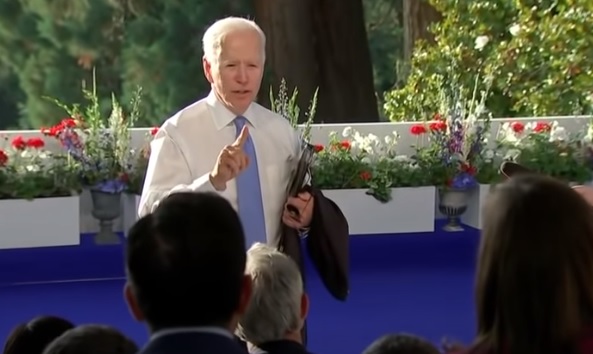 Often times a person in cognitive decline become frustrated as they try to communicate and that frustration is exhibited in the form of anger. It appears Biden’s cognitive decline is exacerbating his temper issue’s. As mentioned in a New York Times report from May:

Biden has a short temper and sometimes unloads outbursts of profanity on his aides, the New York Times reported Friday.

The report notes Biden holds lengthy deliberation meetings and demands obsessive details from his advisors. When advisors get too technical or obscure about an issue, Biden responds with “an outburst of frustration, often laced with profanity.”

During the campaign last year he frequently lashed out at voters, calling a young woman a “lying dog-faced pony soldier,” absurdly challenging a young man to a fist fight, and ridiculing a heavy set man’s appearance. As his mind deteriorates, the problem can be expected to get much worse.

And it’s gotten worse. His pathetic performance on the world stage recently lit the fuse, and you can see why they took away the nuclear codes:

Even the liberal media apparatchiks who put him in power may feel the brunt of his rage when he goes off:

As Biden began leaving the summit, Collins asked the president how he was confident that Russian President Vladimir Putin would change his behavior.

“I’m not confident that he will change his behavior. What the hell? What do you do all the time?” Biden snapped.

See for yourself how he goes after reporters who challenge him in the mildest of ways:

This is classic Joe Biden behavior and he’s used the tactic of storming toward people to intimidate them for many years. But with his current rate of mental decline, how long before he forgets to stop himself? One of these days he’s going to take a swing at some reporter, and when he does his handlers will finally have to call an end to this nonsense, invoke the 25th Amendment and remove him from office — even though Kamala Harris would not be much of an improvement.

As noted at Dementia Care Central,

A person with dementia may show verbal or physical aggression. Examples include threatening another person, screaming, pinching, pulling hair, and biting.

Reporters who know what’s good for them should stick to asking him about ice cream.