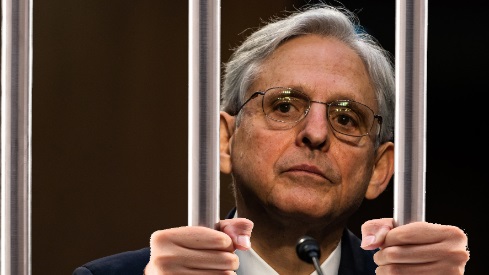 “Some jurisdictions, based on disinformation, have utilized abnormal post-election audit methodologies that may put the integrity of the voting process at risk and undermine public confidence in our democracy,” Garland said, as reported by 12 News.

The news station noted that the AG said he would double the staff of the Civil Rights Division’s enforcement “within the next thirty days, in order to deal with challenges to voting rights nationwide.”

“We must rededicate the resources of the Department of Justice to a critical part of its original mission: enforcing federal law to protect the franchise for all voters,” Garland said.

Election audits will be reviewed “to ensure they abide by federal statutory requirements to protect election records and avoid the intimidation of voters,” he added, and the DOJ will “publish guidance explaining the civil and criminal statutes that apply to post-election audits.”

Arizona Republican Party Chairwoman Kelli Ward fired back Friday on Twitter, writing, “Seems Merrick either wants to ignore or forgot all about the US Constitution…#DOJHasNoSay #StatesRights.”

“You will not touch Arizona ballots or machines unless you want to spend time in an Arizona prison,” posted State Senator Wendy Rogers. “Maybe you should focus on stopping terrorism. The Justice Department is one of the most corrupt institutions in the USA.”

The Biden DOJ has already intervened in the election auditing efforts by Maricopa County Republicans, sending a letter in May to the president of the Arizona state Senate suggesting the recount is illegal.

The Washington Post reported at the time that the DOJ letter raises “the possibility of a clash between state and federal authorities over the audit.”

Penned by Pamela S. Karlan, who heads the DOJ’s civil rights division, the letter suggests “that the recount of nearly 2.1 million ballots in Maricopa County by a private contractor may not comply with federal law, which requires that ballots be securely maintained for 22 months following a federal election,” the Post noted.

“We have a concern that Maricopa County election records, which are required by federal law to be retained and preserved, are no longer under the ultimate control of elections officials, are not being adequately safeguarded by contractors, and are at risk of damage or loss,” wrote Karlan.

Senate Republicans and the GOP-dominated Maricopa County Board of Supervisors disagreed about the accessibility of the ballots; the Senate wanted to perform an audit to address election integrity concerns from constituents, whereas the board argued the ballots, by law, were to be kept secret for 24 months following the election. The judge scolded the parties for failing to come to an agreement on their own but sided with the Senate, suggesting the law in question does not conflict with the subpoenas.

“The Arizona legislature clearly has the power to investigate and examine election reform matters,” the ruling said. “The Subpoenas also do not violate separation of powers principles. Production of the subpoenaed materials would not violate confidentiality laws.”

Watch Biden Give A Crap About State’s Rights

Lying Joe Biden Back At It