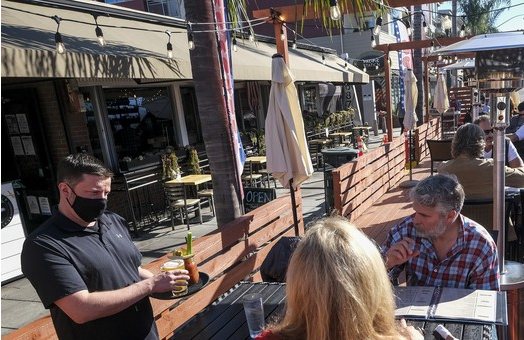 When I see people walking outside, often alone with no one anywhere near them, wearing a mask, my primary reactions are disappointment and sadness.

I am disappointed because I expected better from my fellow Americans. I never thought most Americans would be governed by irrational fears and unquestioning obedience to authority. I have come to realize that I had a somewhat romanticized view of my countrymen.

Had you told me a year ago that nearly every American in nearly every metropolitan area would cover their faces for over a year because one man, one political party and the media told them to, I would have responded that you underestimate the strength of the American character.

But here we are, over a year later, and where I live (the Los Angeles area), I am usually the only person on the street not wearing a mask. (For the record, I wear a mask in stores and when entering the building in which I work, out of courtesy to those who think a person not wearing a mask poses a lethal threat.)

On the rare occasions I pass people not wearing a mask, I thank and praise them. They are invariably enthused by my reaction.

You do not need medical or scientific expertise to understand the foolishness of outdoor mask-wearing. Common sense, that great unused guide to life, suffices.

If you wear a mask, you do so in the belief that you are protecting yourself (and others) from COVID-19. So, then, why do you care if I don’t wear a mask? Doesn’t your mask protect you? If it does, my not wearing a mask may irritate you because you resent my assertion of freedom, my obvious lack of respect for government and medical authorities, and my alleged selfishness, but there would be no rational medical — that is, “science-based” — reason for your objecting to my not wearing a mask.

And if masks protect us and others, why have people been refused the right to visit a loved one as he or she lay dying alone? Why couldn’t a person — wearing the same mask a doctor, nurse or any health care worker wears when entering your parent’s room — enter that room? There are two possible answers: One is it’s a tacit admission that masks are essentially useless. You were prevented from visiting your dying father because the hospital believes your loved one or others in the hospital might contract the virus from you, even though you were wearing a mask. Which means those running the hospital don’t believe masks actually work. The other is that the medical establishment and lay authorities have abandoned elementary human decency in the name of AOC, or “Abundance of Caution.” Forcing hundreds of thousands of people to die alone will go down as one of the cruelest policies ever adopted by American medical and political authorities.

The problem is most Americans who went to college learned to unquestioningly obey “experts.” This is why common sense, logic and reason mean little to the well-educated — and, increasingly, to everyone else, because everyone is taught by the well-educated. All we need to know is what the “experts” say. That plus a fanatical adherence to the rule of AOC have crushed logic and reason.

The irony, however, is that “the science” doesn’t justify the fanatical commitment to mask-wearing. There are plenty of experts with evidence-based views to the contrary. Here are but a few examples:

Dr. Anthony Fauci himself told the truth about the uselessness of mask-wearing on “60 Minutes” on March 8, 2020: “Right now, in the United States, people should not be walking around with masks. … There’s no reason to be walking around with a mask. When you’re in the middle of an outbreak, wearing a mask might make people feel a little bit better, and it might even block a droplet, but it’s not providing the perfect protection that people think that it is. And, often, there are unintended consequences: People keep fiddling with the mask, and they keep touching their face.”

The Wall Street Journal reported on Nov. 11, 2020: “The projected number of lives saved, and the implied case for a mask mandate, are based on a faulty statistic.”

Dr. Paul E. Alexander, a Canadian epidemiologist, wrote: “Surgical and cloth masks, used as they currently are, have absolutely no impact on controlling the transmission of Covid-19 virus, and current evidence implies that face masks can be actually harmful.” (American Institute for Economic Research, Feb. 11, 2021.)

Roger W. Koops, who has a doctorate in chemistry from the University of California, Riverside, wrote: “A ‘mask,’ and that term usually refers to either a SURGICAL mask or N95 mask, has no benefit in the general population and is only useful in controlled clinical settings. Further, it has been considered a greater transmission risk than a benefit in the general population. … In the open environment, no one should be wearing face coverings.” (American Institute for Economic Research, Oct. 16, 2020.)

Finally, a study published in the New England Journal of Medicine on May 21, 2020, concluded: “We know that wearing a mask outside health care facilities offers little, if any, protection from infection. Public health authorities define a significant exposure to Covid-19 as face-to-face contact within 6 feet with a patient with symptomatic Covid-19 that is sustained for at least a few minutes (and some say more than 10 minutes or even 30 minutes). The chance of catching Covid-19 from a passing interaction in a public space is therefore minimal. In many cases, the desire for widespread masking is a reflexive reaction to anxiety over the pandemic.”

Contrary to mainstream media misinformation, the doctors who wrote that report did not later retract anything they wrote.

This column was originally posted on Townhall.com.

Author: Dennis Prager, one of America’s most respected radio talk show hosts, has been broadcasting in Los Angeles since 1982. Dennis Prager’s popular show became nationally syndicated in 1999 and airs live, Monday through Friday, 9am to 12pm (Pacific Time), 12pm to 3pm (Eastern) from his home station, KRLA.