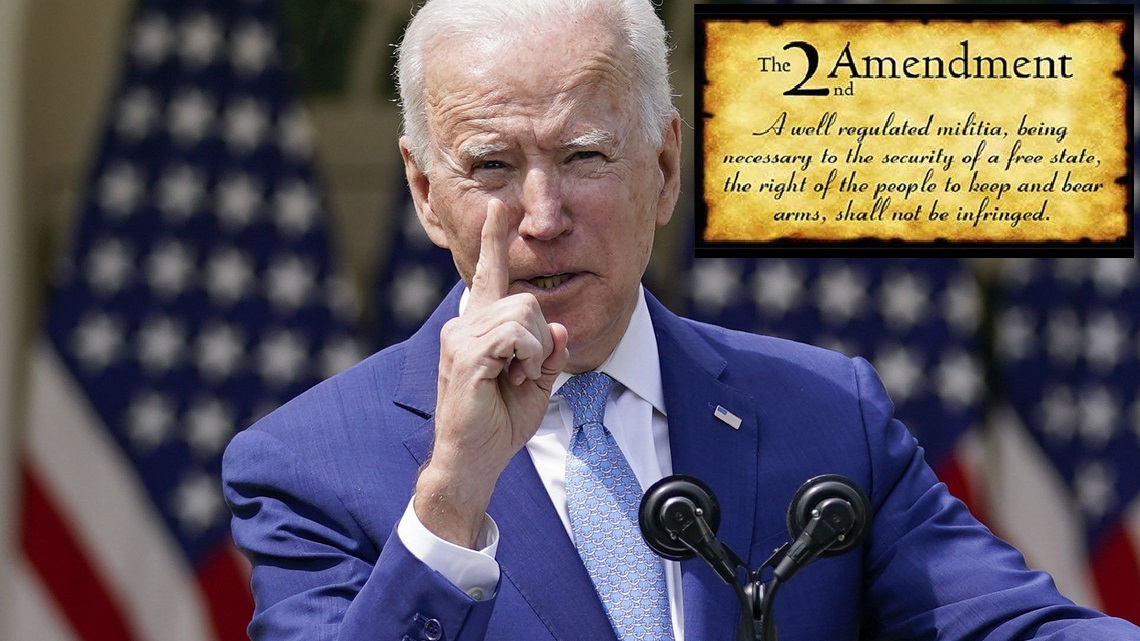 Just as the White House promised the day before, President Joe Biden delivered remarks from the Rose Garden on a handful of executive actions targeting gun violence. And just as one might expect, he made a mess of it. Biden bungled entirely, from delivering several false facts on the history of gun violence and gun control to nominating a former ATF agent to lead the “AFT.” From beginning to end, the president’s ramblings made nothing clear – save one thing: Joe Biden understands neither the Second Amendment nor reality in general.

In attendance were Senators Richard Blumenthal and Chris Murphy of Connecticut, Reps. David Cicilline of Rhode Island, Lou Correa of Georgia, Lucy McBath of Colorado, and Mike Thompson of California – all Democrats, of course – and the vice president and attorney general. Vice President Kamala Harris introduced both the issue and the man she claims is going to solve it, and her own lack of integrity foreshadowed the miasma of malarky to come.

Harris said that we know the problem and the solution, and said, “All that is left is the will and the courage to act.” Despite being handed the border crisis as her first major assignment, Harris is nowhere to be found. As Liberty Nation’s Dave Patterson explained, “she seems to be absent without leave, or AWOL, and some have described her as missing in action, or MIA.” Want to take the VP off the stage? Just give her an important job! So much for that will and courage to act.

Both Harris and Biden repeated a few tried and true “facts” that have helped push gun control in the past – despite their lack of truth. Biden fought the gun lobby and won – and as a result, countless lives were saved. Phooey. LN has the numbers handy for anyone who wants to verify them – real numbers, from the FBI and the CDC. The ten-year ban didn’t have any visible effect on firearms-related deaths. Even the left-leaning Pro-Publica admitted that a study of the 1994 ban showed “no evidence that it has reduced overall gun crime or made shootings less lethal.”

Still, we must ban assault weapons again – this time for good? That’s Biden’s plan, if such a measure can make it through the Senate.

Then there are those pesky ghost guns. Never mind the traditional methods of gunsmithing that Americans have engaged in since before there was a United States, these gun kits are a game-changer. True, it certainly is easier to build a gun if the majority of the manufacturing is already done for you. Biden believes that these guns built from kits in “as little as 30 minutes” – the man has clearly never actually finished out an 80% receiver and then assembled a firearm – are a danger to society. He fails to mention, however, how many of the mass shootings and homicides, in general, are perpetrated using a homemade gun. There’s a reason for that, and it doesn’t take much imagination to figure it out.

Still, those spooky ghost guns have got to go. Biden wants the DOJ to require all vital gun parts to be stamped with serial numbers and require background checks to purchase.

Biden talks about closing loopholes, repeating the lie that policy of allowing a gun sale if the background check takes longer than three days affected the shooting for which the so-called loophole was named. Dylann Roof bought a gun after five days of waiting for a background check to come through – and he was cleared by both the FBI and the ATF before he shot up that church. The law didn’t fail those people, the federal agents who reviewed Roof’s case did.

Yet once again, the president calls for a closing of this “loophole” and for any failed background check to be reported to law enforcement.

Never one to stop at an old lie, Biden introduced a couple new ones – and one little tidbit that is truer than the president might like to think about. When discussing so-called loopholes, Biden claimed that you could buy firearms online or at gun shows without background checks. This is simply and utterly false. Only licensed dealers are allowed to sell firearms at these shows, and background checks are absolutely required. Guns can be bought online, too – but only if they’re shipped to a licensed dealer in the buyer’s state, where said buyer will have to pass a background check. This is nothing more than a push for universal background checks.

Back to restricting gun parts: Biden is going after pistol braces, saying that such modifications make pistols more lethal. This is a bit of a misdirection. Do braces stabilize and make pistols more accurate? Sure, that’s their purpose. But does it make them more lethal? Nope. If anything, they make pistols safer. Generally speaking, the shorter the barrel and the fewer points of contact between shooter and gun, the less accurate a weapon is. So attacking pistol braces simply means shooters who forego the use of one will be less accurate – potentially increasing, rather than decreasing, the number of people injured or killed during a shooting, and not just the criminal ones, either. Whether the person holding the gun intends to murder someone or defend themselves, every bullet that misses the intended target is a bullet that might wound or kill an additional person. Things that actually make a gun more lethal – faster rates of fire and bullets that do more damage when they hit, for example – remain unchanged.
Another Lie … or an Inconvenient Truth?

Revolutionary WarBiden also said that from the beginning – meaning when the Constitution was written – people weren’t allowed to own any weapon they wanted and not everyone was allowed to own guns at all. He’s about half right here. Despite the government’s attempt to tax gun owners out of their automatic weapons, there was no law prohibiting private citizens from owning machine guns until 1986. During the Revolutionary War, many a private citizen used their own ships and cannons in the fight. Even after World War I, soldiers were allowed to keep their service weapons and take them home.

But the president is right when he says there were prohibited persons at the time of the Constitution and the Second Amendment. Slaves were never allowed to own guns – and for a long time after slavery ended, many white Democrats tried to keep blacks from owning guns, and many still do.
If I Could Do One Thing on Guns …

Here’s another oldie but goodie: The firearms industry is the only one in the nation that can’t be sued. What a lie that is. Can publishers be sued if someone bludgeons a person to death with a book? Can Ford face lawsuits if some whacko runs folks over in an F-350? When guns start shooting without anything touching the trigger, then folks can sue manufacturers for potentially deadly defects. There’s no law preventing that, but there is one industry that enjoys such protections from liability: Big Pharma.

“[I]n 1986, beset by scores of costly vaccine injury lawsuits, pharmaceutical companies effectively blackmailed the federal government. Acting in concert, they asserted they would no longer manufacture vaccines if they were to be held liable for revenue-killing vaccine injuries and deaths – and the government relented.”

The Second Amendment, Through Biden’s Eyes

“Nothing, nothing I’m about to recommend in any way impinges on the Second Amendment,” Biden declared before getting good and started. He then proceeded to push red flag laws that remove the right to bear arms and the right to due process – though, admittedly, that last part is more of a Fifth Amendment issue. He pushed for an assault weapons ban, to effectively prohibit home gunsmithing, stop online sales of guns, parts, and ammunition, and to have universal background checks even for gun parts. It’s clear that Biden doesn’t understand the Second Amendment any more than he understands anything else on the issue of guns and violence. That, or he is so committed to disarming the people that he doesn’t care if he looks like a fool. Honestly, it’s hard to say which possibility is worse.

Originally published at The Liberty Nation

Author: James Fite is a wordsmith extraordinaire, a legislation hound and lover of all things self-reliant and free. An author of politics and fiction (often one and the same) he homesteads in the Arkansas wilderness.