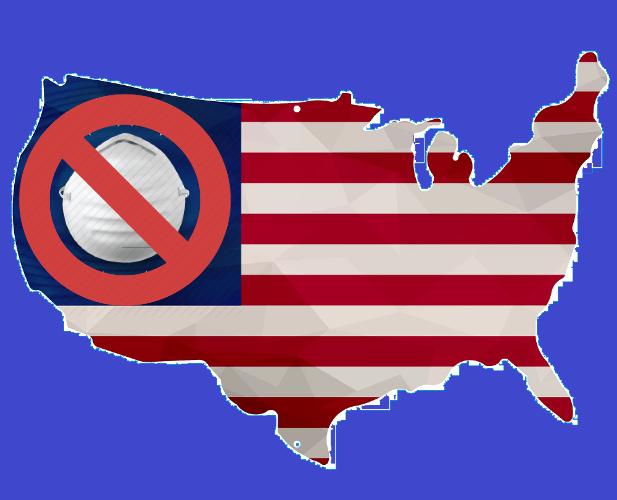 The motto of this website is based on advice my father once gave me, “Evil is powerless when the good are fearless.” It’s time to put that slogan into practice by taking off your mask. Don’t just let it slip under your nose. Go 100% maskless.  It’s your duty as an American Patriot!

Face the Day With No Fear!

The time has come to stop with the mask obsession. Stop with the mask mandates. Stop with the mask shaming and stop these mask bullies dead in their tracks. For over a year now I have had to put up with it and I am done! I used to tell people, “Look if you want to wear one, knock yourself out, but just leave me alone.” Well, I’m done playing nice with these sheeple. From now on I’m going to actively encourage people to take a stand and take off the mask!

Stand up to the enforcers of these stupid rules. Step out of your comfort zone and leave the mask at home in the trash where it belongs. Hold your naked head up high with pride in yourself, your country and the freedom God gave you and walk right into the grocery store, shopping mall, bank, or restaurant.

If they tell you to put on a mask use your own discretion, don’t fight or argue with the person, they’re just doing their job, either leave or do as they ask. It’s entirely up to you, but you might be surprised to find out that the “mask policy” of most establishments are not actually enforced, they might just leave you alone. But you’ll never know unless you try.

Take yourself out of your safe space, get off your cozy couch, step away from your retreat of refuge just a little bit and you could very well save America.

While some states loosen or lift their mask mandates, private companies are holding fast to them and this is causing too many conservatives and libertarians on the right to falter. When the government is imposing masks on people it’s seen by many of us on the right as a violation of our rights, dignity, and the fundamental norms of Western Civilization, but when private business does it, it’s seen as merely the exercise of property rights.

These free-market fundamentalists on the right side of the fence excuse the mask mandates when handed down from a corporate office, because it’s not a government one. This is pure intellectual cowardice which undermines the very first premise of the free market, the indispensable cohesion and trust that must exist within a social order.

It should be obvious how mass masking tears at the fabric of society, to say nothing of the psychological effects on future generations waiting in the wings dreaming up their own way to screw everything up. In fact please allow me to use a common argument used by the left; “Think about the children.” My grandchildren have become so brain washed about the whole “mask thing” they insist on wearing them almost 24-7. Not just when they go out with Mom to the store, but in the house and even in the back yard playing on the swing set or throwing the ball around. And it’s not because their parents are forcing it on them, it’s because of the media messages they’ve been relentlessly exposed to.

We have to stop the insanity, with no compromise, even though some businesses are trying to find one. They may require employees to mask up while allowing customers to go mask-free, thus creating or exaggerating a class divide between lower wage workers and wealthier consumers that will not be good for anyone’s safety in the long run.

Trust me on this; mask mania is not going to go away on its own. Yes, there may be some anecdotal stories here and there about people defying this form of oxygen allocation; you’ll see people gradually starting to poke their noses out from under their mandated muzzles from time to time, but this minor form of protest is simply not enough.

Thankfully, some people are drawing a line in the sand like Terry White in Texas a few weeks back.

Terry White is a 65-year-old woman, who went maskless into a Bank of America in Galveston. She stood in line exhibiting no symptoms of any kind, standing at least six feet apart from all others.

B. of A. ordered her to wear a mask or leave, then when she refused they called the cops, and it got nasty at that point.

Bodycam footage, seen all over the internet shows White mocking the warning from the police officer that she might be arrested for not leaving the property. And when the officer pulled out his handcuffs, she turned around to leave, but by that time it was too late.

Terry was thrown on the ground, where the officer broke her foot and dumped all of her personal belongings onto the floor. Then the other customers started screaming at Terry White, mocking her and not showing any sympathy whatsoever.

Now, I know what you’re going to say, “Why not just put on the dang mask?” And while there are certainly some valid criticisms of this woman, that goes to the essence of playing the role of the tragic hero, but any conservative, libertarian, or other right-minded, right-wing person who chooses denunciation over outrage is part of the problem in this country.

Now, the point here is not to be a rude asshole or invite some kind of physical conflict, and that should be obvious. But as the late Rep. John Lewis once said, “Never, ever be afraid to make some noise and get in good trouble, necessary trouble.”

There’s nothing wrong with causing “good trouble.” And believe me, as an active anti-masker it’s not really that big a deal, especially after putting it into practice a couple times. Just try it. You’ll like it.

First of all, try taking baby steps toward your mask liberation. Start with not wearing your mask outside or in your car when you’re all alone. If you’re guilty of doing that let me tell you something right now, you look like an idiot.

Once you break the habit of “masking up” when completely alone try doing it when you run your errands. Just go shopping as you normally do, but when you walk into the store just act normal and walk right past the “Please Do as We Ask, and Just Wear a Mask” sign and grab a shopping buggy and go about your business.

One of two things will happen. Either nobody will say a word to you or a store greeter or casher might say something like “Excuse me…” at which point you can give them your full attention or just ignore them like you don’t hear them and walk on by.

If you choose to give them your full attention when they ask, “Um, do you have a mask?” just say, “Yes, I do, thank you” and keep walking. Be polite even smile. Smile as big as the great outdoors BUT keep walking like you own the place. At this point they may just leave you alone or they may ask you to please put your mask on. Avoid the urge to give a speech or an excuse like having a medical condition.

Remember; be as polite and as reserved as you can. You can engage with them about this time because the other person is pretty much done reading the scripted lines given to them by management.

“I appreciate that policy and I want to give you my business, and be a returning customer. That’s why I’m asking you to please consider that and let me pay for your services without you forcing me to wear a mask.”

Now, more than likely this isn’t getting you anywhere at first glance. They might tell you that while they actually agree with you they’re just doing their job or they may say they’re calling the cops at this juncture, despite your friendly demeanor.

Killing them with kindness is the whole idea here. How far that will get you depends on the situation and the people involved, but any new anti-masker will benefit from the experience. In an ideal scenario, you should be gracious yet loud enough for bystanders to take notice of what’s going on.

In a short period of time, encounters like these will become easier to do. That adrenaline rush you feel the first time you do it will subside, and the new ‘civil disobedience’ skills and strengths you gain can even be shared with friends and family who would also like to push back against the ‘Mask Nazi’s’.

I’m very well aware that suggesting normal people pull off stunts like this may pretty much be futile. But let me tell you, the threats to individual liberty today are so highly disruptive to our normal social functions that bond communities together we have no other choice. There’s no great civil rights institution to save us, so it’s up to us to set an example and encourage others to join us.

Challenge yourself and those around you in a safe and responsible manner, set an example and if enough others do the same, that will be the last of the mask mandates, private or public.

The only power the Mask Nazi’s have over you, is the power you give them. Take back control over your life. Have No Fear.