What we know about the metro Atlanta spa shootings 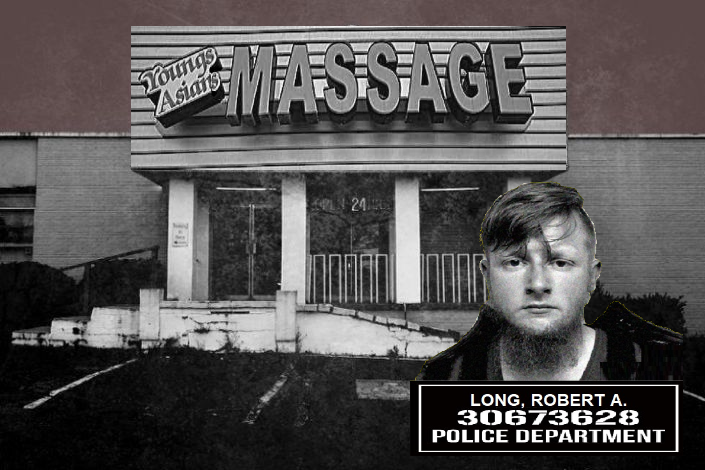 Police say video evidence led them to believe one suspect, Robert Aaron Long, was responsible for all three shootings. He was arrested Tuesday night about 150 miles south of Atlanta.

Here’s what we know so far:

About the shootings: The first shooting happened shortly before 5 p.m. Tuesday at Young’s Asian Massage near Woodstock, Georgia, about 30 miles northwest of downtown Atlanta. That shooting left four dead. One person was also wounded, Cherokee County Sheriff’s Office said. About an hour later, three people were found dead at the Gold Massage Spa on Piedmont Road in Atlanta, Police Chief Rodney Bryant said. One person was also found dead at the Aroma Therapy Spa, directly across the street.

The victims: It’s believed 7 victims were employees of the massage parlors and one may possibly been a customer. The four killed in the shooting near Woodstock were Delaina Ashley Yaun, 33, of Acworth; Paul Andre Michels, 54, of Atlanta; Xiaojie Yan, 49, of Kennesaw; and Daoyou Feng, 44.

Police didn’t immediately release the names of the four people killed at the two Atlanta spas. Four of those killed were of Korean ethnicity, according to South Korea’s foreign ministry, which said it was in contact with its consulate in Atlanta. They may have been undocumented.

Investigators tracked Long’s phone, and Reynolds reached out to authorities in Crisp County, well to the south, to let them know he appeared to be heading in that direction, Reynolds said. Long’s vehicle was spotted, a chase ensued on Interstate 75 in Crisp County, and a state trooper performed a maneuver that sent the SUV out of control, authorities said. Police arrested Long and confiscated a 9 mm gun from his vehicle, Cherokee County authorities said.

The suspect’s intentions: Preliminary information indicates the shootings relate to the suspect’s claim of a sex addiction, Cherokee County authorities said Wednesday. Long told investigators he saw the massage parlors as a temptation that he wanted to eliminate. He has claimed to be a patron of the establishments in the past, according to authorities.

Community on edge: Because of the victims’ backgrounds, some public officials had raised fears before Wednesday’s police news conference that ethnicity had come into play, amid rising concerns nationwide about anti-Asian violence. Opportunistic liberal Democrats and the usual suspects in the lame-stream media have been eager to tie Trump supporters into those nationwide random attacks, however there simply isn’t any evidence to suggest it’s true in this case.

Even Atlanta Mayor Keisha Lance Bottoms, got into the act acknowledging most of the victims were Asian, said Wednesday that “we know (violence against Asian Americans) is an issue that’s happening around the country; it is unacceptable, it is hateful, and it has to stop.” As the facts unfold it’s likely she and the rest who are attempting to politicize this tragedy will have egg on their faces at which point they’ll drop the “racist attack” rhetoric and move to blame guns in order to advance their gun grabbing agenda.