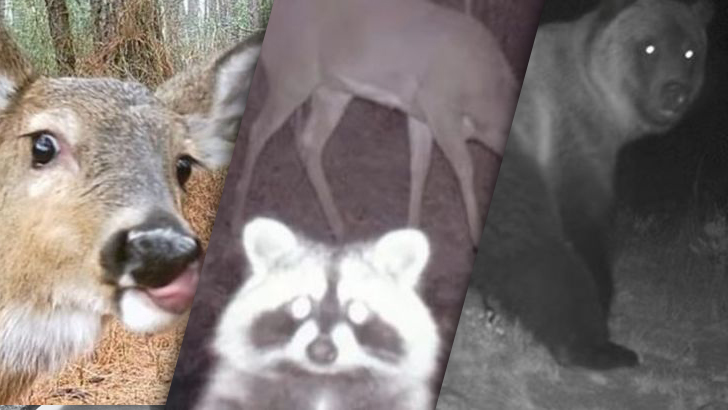 Trail cams serve all sorts of different purposes, from hunting to helping conservationists monitor species in high traffic areas. Not only are trail cams a cool way to research and survey the surrounding environment, but they also reveal what goes on when humans aren’t around.

Whether it be in national parks or more adventurous trails in rural areas, tons of species live along these paths, and even they are intrigued by these curious cams, especially at night.

Either something spooked this deer, or it enjoys walking on its hind legs at night when no one’s looking. Definitely not typical behavior, but without a cam, we may not have caught this peculiar moment.

It seems as this cam intruded on these lovely cats’ evening dinner plans, as the two mountain lions were captured sharing an affectionate moment near their food dish. Classic example of a cam rigged up near a designated feeding site.

This raccoon seems unashamed to be taking its liberty with a wild boar that he’s decided to just hop right on. He must realize that the boar knows where the food is, and even his buddy in the background is ready to follow.

Who knows what this particular deer was getting into before he stumbled on the camera, but it certainly looks guilty. With that bushel of sticks caught up in his antlers, you’d think it was either in a fight, or running for its life.

In quite a remarkable moment, this cam managed to capture three wolves all howling at the moon at once. Even though it’s something they’re known for, hard to imagine you’d ever get this close in person.

This raccoon seems to be having a great time with his deer friends, so much so that he wants the moment to last forever on camera. While this little guy was definitely just curious, it’s cool to see different animals mingling like this.

This bear appears to have stumbled right in front of the trail cam, only realizing he is now the main subject. It’s a clear indicator that animals know that these devices don’t belong in the wild, and are puzzled by their purpose.

It’s not every day that you just see a gorilla or maybe it’s Bigfoot wondering along the pathway, whatever it is it seems to be in a hurry by the way he hustled right by on two upright legs.

Click “HERE” to see more of the craziest things animals were caught doing on these trail cams!